Cllr Lumley says the £200k ‘saving’ which could result in roads falling apart from day one after the PFI contract expires is short-sighted and “badly letting down the Island who were promised so much by Eddie Giles and his pals”. 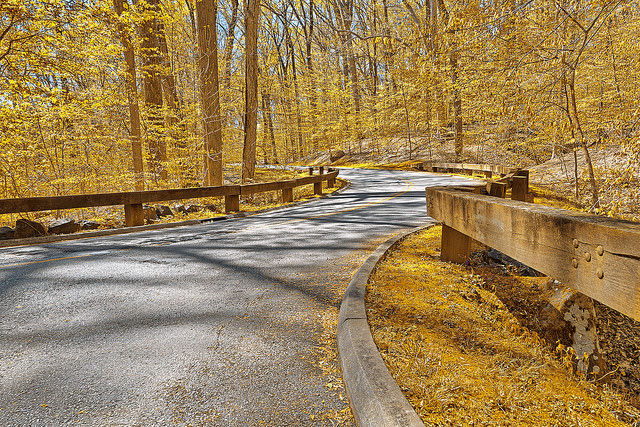 The Conservative-UKIP-IMG budget was narrowly approved at the recent Isle of Wight Full Council meeting.

Labour councillor for Newport East, Cllr Geoff Lumley has criticised one particular saving that relates to the “relaxation of seven year handback requirement” in the Highways PFI Contract.

Road condition at the end of the contract will not have to meet the 7 year life requirement and some roads will be maintained with alternative, but suitable surfaces.

“Short-sighted” £200,000 saving
Written in the PFI contract is the requirement that when Island Roads reach the end of the 25 year contract in 2038, the Isle of Wight roads must have been built to a standard that would not require work on them for a further seven years.

“Just four years into this 25 year contract it seems incredibly short-sighted to already be chipping away at what we will be left with in 2038.

“We were promised an excellent road network at the end of the contract that would not require any further work on it in the following seven years.

“If that promise can so easily be given up by the new Tory/Ukip administration, what else would they give up if they were allowed to continue past May?”

‘Saving’ is “badly letting down the Island”
When last month’s Scrutiny Committee looked at the budget papers, the issue was then raised by Cllr Lumley (also the only councillor who raised it at the February Budget Meeting).

He said the ‘saving’ was “badly letting down the Island who were promised so much by Eddie Giles and his pals”.

Adding that, to reach the end of the 25 year contract and have the roads potentially fall apart from day one is a short sighted measure, as they would then be the responsibility of the council.

Gilbey: “Not a gold standard piece of work”
The executive member responsible for the PFI, Cllr Jon Gilbey said they way the PFI contract was written was that they were given a ‘gold-standard’ contract, adding,

“As much as we’d all like to buy a Rolls Royce unfortunately sometimes we have to settle for a Ford Escort.

Can readjust it in ten-12 years
Deputy leader, Cllr Stuart Hutchinson, and one of those on the Cabinet that brought forward the contract in 2012, replied,

“As time goes by over four years of ten years things will have to change, we will have to make contract adjustments – at this moment in time because of the serious financial difficulties we fund ourselves in we’re looking at whether savings can be made and that means at the end of the contract yes, there may be some changes.

“But it also means that if we’re healthier financial situation in ten or 12 years from now we can readjust it and put it back. It is such a long way ahead.”

Image: Nicolas Raymond under CC BY 2.0

This is a ridiculous idea. Any savings made now will end up costing 100 times as much at the end of the contract. To fiddle about with a contract that has barely started and is still full of holes is beyond belief.

The party that proposes to reverse this decision immediately after the election will get my vote.

Will Labour make this promise?

I am really disappointed in Stuart Hutchinson. I thought he was better than that. 10 years on we can put it back in? Don’t be so soft.

Vote Up00Vote Down
retired hack
So the PFI “dream” is officially dead. Every road on the island was going to be rebuilt, from scratch if necessary because a lot of them were former cart tracks. We were going to go from having the worst roads in the country to having the best. It was free money from the Government and only a fool would turn it down. Edward Giles, who isn’t above… Read more »
Vote Up00Vote Down
PJ
RH: I dont suppose you will see very often this kind of language from a ‘politician’ at any level of local politics…. It was, and is, a blatant lie that every road was going to be rebuilt or even re-surfaced. It is nearer the truth to say that around 90% of roads will be ‘upgraded to a standard’ leaving around 10% of all roads *untouched* – that’s… Read more »
Vote Up00Vote Down
Simon Cooke

This is why we need more transparency and less ‘commercial confidentially’.

Thanks once again to Phil for shredding light on this seemingly faustian contract.

Vote Up00Vote Down
PJ
Colin: You are right to be disappointed … Both Cllr Gilbey and Cllr Hutchinson seem woefully ill informed of the contract detail and what we are expecting. However, the first thing to understand is this. The amount of money that is being used for budgetary purposes is not precise. They were figures given to *us* (by that, I mean the contracts management team and myself) by the… Read more »
Vote Up00Vote Down
Luisa Hillard
I agree with Geoff Lumley on this. The risk of roads and pavements being finished with materials which are not as durable could mean higher maintenance costs in future. It is misleading of the Cons to suggest that the contract specification can be improved again in a few years. Once we are through the initial 7 year investment period the work will have been completed. Are we… Read more »
Vote Up00Vote Down