Solent Tunnel Viability Study: A review of progress so far and what’s next 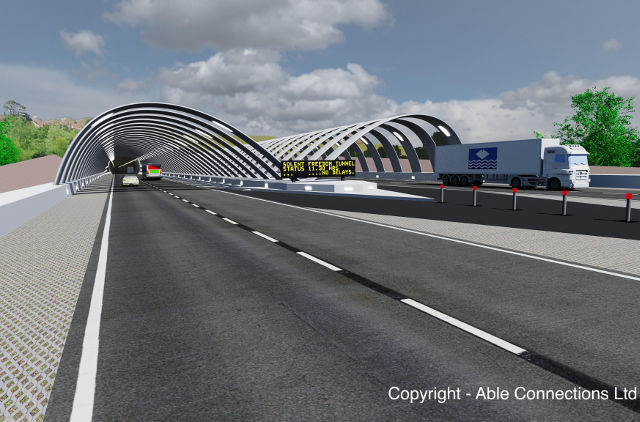 Those behind the Solent Freedom Tunnel have launched a new Crowdfunder campaign to raise £96,000 to fund a viability study by engineering firm, Arup, for a fixed-link to the Isle of Wight.

As previously reported by News OnTheWight Carl Feeney and Kevin Price first launched their proposed plans for a Solent Tunnel six years ago in 2014. A GoFundMe appeal was later launched in 2016, which raised £3,000.

Feasibility study
Fast forward to 2017 and Tim Cooper (now not involved), Kevin Price and Carl Feeney, set up Able Connections Ltd, to move the campaign to the next level.

New Crowdfunder campaign
Kevin Price got in touch at the end of last week to announce that almost £25,000 has already been raised and a new Crowdfunder campaign has been launched to raise the remaining £96,000 that’s needed for the study (they managed to get Arup to reduce the £130,000 quote for the work to £120,000).

Kevin says that once the viability study is performed,

“Arup will present it to the Government, then a full feasibility study will need to be performed.”

“The Government have recently announced over £600 billion is available for infrastructure projects, and they have set up a new ‘Acceleration unit’ to speed up projects.

“This is a non-profit campaign, so all donations go towards the study.”

Questions about funds raised
Ahead of publishing, News OnTheWight put the following questions to the team.

“The GoFundMe platform is still active, but a new reinvigorated push to achieve the amount required to start the Arup study, needs a new platform to introduce that.

“There are now three ways to donate – two fundraising platforms or the direct transfer of the contribution into the Campaign Barclays community account, which is actually the most preferable because no platform fee is taken, and the contribution can be fully refunded to the donor if need be.”

He went on to explain,

“The contributions paid into GoFundMe are transferred from the fundraising platform straight into the ‘Pro-Link Campaign Fund Community Account’ at Barclays in Newport. The account statements show these transferred payments named as ‘Stripe’.

“The other £19,000 has been transferred directly from contributors own accounts into the Campaign fund account. I have contributed £3,000 into the fund personally this way. I’m very keen to see this done so the Island can prosper.”

Feeney: Full disclosure
In response to our question about how much has been raised and where it is held Carl said,

“Full and absolute disclosure of the process is paramount in order for there to be no ambiguity of honesty or trust.

“Unfortunately, but typically, there are individuals and companies out there who have vested interests to make sure the study does not go ahead. They clearly fear the results and conclusions. These people have attempted to discredit this fundraising process as a “scam”, using social media mainly to do so.

“Each month, the Community account bank statement is published on the ‘IOW Fixed link tunnel campaign’ group on Facebook. It then gets archived in the ‘announcements’ section so that anyone can view previous statements. All incomings (names redacted for privacy reasons) are published as are any outgoings.”

At today’s date this is the amount raised so far is £24,542.85 including the £3,000 contribution by Carl and the GoFundMe amounts.

15 Comments on "Solent Tunnel Viability Study: A review of progress so far and what’s next"

newest oldest most voted
lauque
On present form, one can all too easily imagine any involvement of either the council or national government leading to another expensive display of incompetence as seen with the floating bridge, St Mary’s, the much-vaunted London garden bridge, ferry companies with no ferries, and failed PPE procurement. The simplest solution would be to force the ferries to provide more affordable travel. That’s probably even less likely than… Read more »
Vote Up49-9Vote Down
Colin
So if a tunnel were to be built, what would happen to the existing ferry crossings? Would the ferries be profitable to run? What if the ferries were no longer profitable to run say from Yarmouth to Lymington? What about foot traffic on that side of the Island? The creation of a tunnel may be handy for some but if other routes were to close because of… Read more »
Vote Up46-14Vote Down
bbrown

IF and it’s a big IF a fixed link was built then ALL the car ferries would cease but I could see foot passenger ferries surviving but probably under another single company with the addition of a foot only service Y/L.

Oh do we have to revisit this nonsenseZ?
Yawn :O

I’m frankly amazed that ARUP have agreed to hold that price for so long. After all it has been a long time with nothing happening. Still, perhaps they, ARUP, need to re-establish their credibility after the debacle of their Australian tunnel study which was spectacularly optimistic and they got sued.

Vote Up41-15Vote Down
greenhey
It’s time this nonsense stopped. Neither a bridge or a tunnel will ever happen, for a long list of practical , environmental and economic reasons. But even if it did…simple economics…A fixed crossing would have to charge fees at least comparable to that which the ferries charge now. To have any hope of recovering the cost….but even worse ferry fares would have to RISE, not fall,as the… Read more »
Vote Up50-25Vote Down
smiffy

Greenhey–personally I’d rather have a tunnel than travel red funnel as tunnel fees are Government regulated. Red Funnel and the other ones are free to charge what they like which is why people like me feel we live on Alcatraz. You are either well off or never leave the Island.

Vote Up24-38Vote Down
greenhey
The government may need to approve the fees but no-one will build the tunnel without assurances about that. They will have to be at least on a par with what the ferries charge now. Do people realise that with Eurotunnel (a) that you don’t drive through, you drive onto a train , so it takes almost as long as the ferry, because they could not cope with… Read more »
Vote Up2-2Vote Down
Tim

Why are people so frightened of something that is just a study? All it will do is help us all to make informed decisions. Who knows, it might even say what a wonderful institution the ferry companies are and that us islanders should be eternally grateful to them?

Vote Up39-27Vote Down
Dalek
Not frightened, just think it is a waste of time & other people’s money. Having run both feasibility & viability studies on various topics for many years, my findings are that they generally come out agreeing with the point of view of whoever is paying the bill. Which is probably how ARUP got into such hot water in Australia. Even if it were to come out as… Read more »
Vote Up40-19Vote Down
Angela Hewitt
Tim a study is fine so long as it is not paid for by the tax payer. if it was at all feasible then the developer would be more than happy to pay for a study. I was a councilor at the time of the last study – done by some university students. I can already tell you that the result would probably be the same apart… Read more »
Vote Up13-2Vote Down
Highway to Hell

That is an awfully long reply, full of waffle.
‘Not much’ or ‘Very little’ would suffice.

Have you noticed how any failure of the appeal is down to someone else, and not a flawed idea?

PS will a FL support CEE and improve maritime biodiversity. Also if he fails to raise enough money will he refund everyone as well as commissions?

Vote Up8-2Vote Down
Benny C
Recently, tunnel supporters are alleged to have commenced digging a large trial hole. Councillor Ian Ward is apparently looking into it. His new trousers arrive on Friday. Separately, Councillor Vanessa Churchman said, in a rambling live interview for Austrian Budgie Owners Club Radio, that she was very much in favour of the proposed bridge and Therefore would be voting against it. Both Councillors were unavailable for comment… Read more »
Vote Up50Vote Down