A special meeting will take place later this month, where councillors will debate postponing the works. 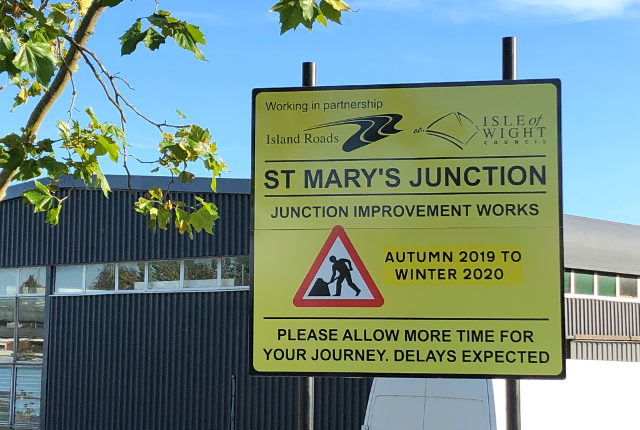 An extraordinary meeting of the Isle of Wight council will be held on Wednesday 25th September (5pm) to discuss the planned roadworks at St Mary’s roundabout and call for the works to be postponed.

The call for the meeting was organised by Cllr Geoff Brodie, with the support of Cllrs Jones-Evans, Garratt, Fuller, Lilley and Love.

“I organised support for the meeting because we all feel strongly that there should be a public record of those IW Councillors who oppose these highly disruptive works being undertaken until the problems at Coppins Bridge are addressed and subsequent benefits evaluated.

“So far it has been only Cabinet decision-making and the scheme that has been agreed for St Mary’s junction is entirely different to the one consulted upon nearly a year ago.”

Call for works to be postponed
Members will debate and vote on the motion:

The Motion will be proposed by Julie Jones-Evans as Cllr Brodie is unable to make the meeting.

Opposition to the plans
In early September the Isle of Wight council announced that roadworks lasting 15 months at St Mary’s roundabout would begin at the end of this month.

newest oldest most voted
royscott
And as reported elsewhere in ‘On thenWight’ we know that Conservative Cllr. Price wants the scheme halted. It seems very few residents support this, but the Cabinet seem certain that we need this, what the sign says, is an improvement. What do they know that we all don’t, hopefully some answers on the 25th. What is the real reason to subject us to 15 months of Island… Read more »
Vote Up41-1Vote Down
Alternative Perspective

Well it would be daft to have the road works going on, with all the disruption, during the period of the next Council Elections, it’s hardly going to be a vote winner.

Vote Up350Vote Down
Colin
This is a poorly thought out scheme. It is basically two full sets of lights with a short space inbetween that the majority of traffic will be funelled through. This section will be constantly full of stop/ start traffic and be a new bottleneck where one currently doesn’t exist. The IWC needs to completely explain to us all the flow of traffic. For instance, for the Forest… Read more »
Vote Up33-1Vote Down
royscott
Excellent points Colin, any county councillors reading this need to be sure that they are satisfied with the answers to the points you raise, and also that they are told the real reason a grant was given for this improvement. Is it expected that there will be some significant developments resulting in more traffic, time for the exec to be honest. Why was the grant applied for… Read more »
Vote Up210Vote Down
Colin
@royscott. There are so many aspects that are unsatisfactory about this proposal that there isn’t the time in the day to list them all. The St.Mary’s scheme is just one phase out of nine for the roads around Newport’s dual carriageway. Other phases include closing the high streeet exit at Coppins bridge along with changes to the mini roundabouts under the dual by Lidl. Whist there are… Read more »
Vote Up20-1Vote Down
johnr

I think you will find the ‘experts’ are ex IOW Council Highways employees.

Perhaps Cllr. Ward should answer these questions. Why have Island Roads been given this contract when they are so far behind in the 7-year core period of upgrading the island’s roads? Where will the labour for this project be coming from? ; the existing work force? When the 7-year milestone is passed next spring and only 60% of the upgrading is done, what then?

Maybe Cllr Ian Ward and weak Leader Dave Stewart will explain their strategy and reasoning to us all. I’d like them to keep doing that until they know what it is!

Vote Up190Vote Down
johnr
Just a couple of added comments. So far it has been only cabinet decision-making and the scheme that has been agreed for St Mary’s junction is entirely different to the one consulted upon nearly a year ago.” So does this mean that the scheme may not even be legal? Chair, Cllr Julie Jones-Evans, said the parish council had twice requested a briefing on the St Mary’s scheme… Read more »
Vote Up14-1Vote Down
Geoff Brodie

Because the IW Council allows Island Roads to lead them by the nose and Island Rogues have absolute contempt for local people.

Also all the Cowes to Newport and return traffic will be going Pallance Road, Thorness, Forest Road and through Gunville, are they going to stop all parking in these areas as they have done in the Industrial Estate?

I wonder when winter 2020 is supposed to be – at the end, probably, rather than the beginning…?

The work was due to last until mid-December 2020.

Should this scheme go ahead, seems a useful time to remind drivers that Lushington Hill will also be subject to long delays for 8 weeks from October 7th.

This is due to Park Road, Wootton being closed whilst they check the bridge.

Anyone wanting to get from Cowes to Ryde, needs to pack sandwiches and drinks.

Vote Up80Vote Down
JossS
Wow, we’re so close to the start date but maybe common sense will prevail after all! 🤞 Why are such bad decisions constantly being made by the majority of our Councillors under the leadership (debatable) of Cllr Dave Stewart; why won’t they even listen? How about getting it right for once and quashing this ridiculous scheme of roadworks at St Mary’s to concentrate on Coppins Bridge where… Read more »
Vote Up70Vote Down
Spartacus

Absolute common sense to halt this works, everybody knows where the real problem is Coppins bridge. This needs to be abandoned without hesitation.

Is the meeting open to the public? I live up Hunnyhill so this will affect me. Personally, I think the whole idea should be abolished, not just postponed!!

Yes – from memory, unless/ until anything changes:
5pm start; 4.30 to 4.50 to indicate to reception desk staff any wish to ask questions.

I am afraid that the Council’s constitution does not allow for public questions at an extraordinary meeting.

In that case, unless/ until that changes I am afraid that the ‘publicly funded and committed to being open’ council might have to make more allowances for extraordinary public criticism at meetings and elsewhere.