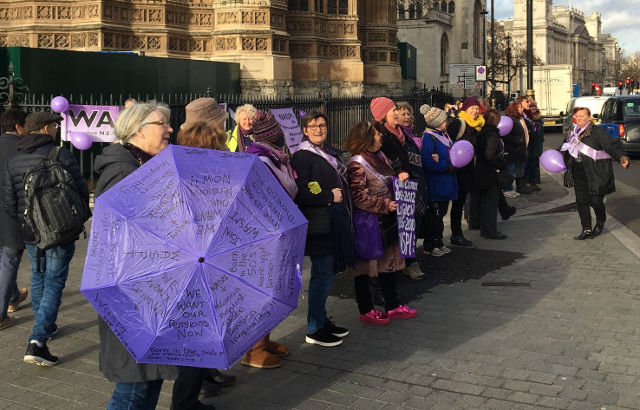 On Thursday, 14th December 2017, members of the Women Against State Pension Inequality (WASPI) Campaign travelled from many areas around the country to attend a Parliamentary debate calling for fair transitional state pension arrangements for women born in the 1950s. Pension legislation in 1995 and 2011 has resulted in increases in the state pension age (SPA) for women.

WASPI agrees with the equalisation of the pension age for men and women, but takes issue with the way in which the changes were implemented and the lack of communication that did not allow sufficient time for women to make alternative financial arrangements or change their work plans.

Over 100 WASPI women listened to the debate, while others braved the cold to demonstrate outside. Several representatives of Solent WASPI Supporters’ Group from Portsmouth and the Isle of Wight made the trip to London. Portsmouth members were met at Westminster by Portsmouth South MP, Stephen Morgan, who supports their campaign.

13th debate
The debate on Thursday was the thirteenth on this issue. This shows the determination of supporters and MPs to secure state pension justice for WASPI women.

Speakers included MPs of all parties, some telling heartrending personal stories of constituents who have been caused great hardship due to an SPA rise of up to six years. They told of women unable to work because of illness or caring responsibilities.

Tribute to Solent WASPI
We thank Mims Davies, MP for Eastleigh, for reiterating this point:

“I, too, have lobbied the Minister on this issue. I pay tribute to the Solent WASPI women, who have also presented a petition here in Parliament.

“Many of the affected women are unable to go back to work because they have already taken on a caring responsibility. That very much affects what they can do financially.”

Real world stories shared
MPs spoke of constituents who have been forced to use foodbanks or sell their homes to make ends meet.

They frequently referred to the huge contribution 1950s women have made to their communities and country, while facing a lifetime of discrimination in earning potential and lack of opportunities to build a pension.

MPs not paying attention
During the debate, Pensions Minister Guy Opperman did not appear to be listening to the arguments of his fellow Conservative members or those of Opposition members, but busied himself with paperwork.

Gosport MP Caroline Dinenage – Parliamentary Under-Secretary at the Department for Work and Pensions (DWP) – was present for part of the debate but was preoccupied with her phone.

When Mr Opperman finally rose to speak, he offered no hope to the 3.8 million women around the country who are suffering because of the pension changes. He simply repeated the same Government line complete with inaccuracies, misinformation and failure to address the basic unfairness affecting women and their families here and now.

Frustration with lack of action
The WASPI women have heard the same hackneyed response many times already and are becoming increasingly frustrated by the Government’s intransigence and lack of action.

To show their disappointment, the WASPI women in the Public Gallery stood and turned their backs on the Minister before walking out.

Grossly insulting
Solent Group Joint Co-ordinators, Shelagh Simmons and Carolyne Jacobs, were among those in the Public Gallery to take this action. They commented:

“Many people have complimented us on the dignity of our campaign. However, sometimes it is difficult not to show frustration with a Government that will not listen to, or address, the plight of 3.8 million 1950s women in this country.

“We would not normally take the action we took on Thursday, but we felt that the group had little option but to make our point in this very visible way.

“The majority of women born in the 50s have worked since they left school, paid taxes, raised families, looked after elderly relatives and grandchildren and contributed to society.

“It is grossly insulting for the Government now to portray them as a burden. They were promised, and expected, their state pension when they reached 60, only for the Government to move the goalposts with little, or no, warning. We say again, this is not a party political issue. It is a fairness and justice issue and it must be put right.”

“I thank the more than 30 Members who have participated in the debate, either directly through speeches or in the numerous interventions.

“I hope that the Minister has taken note of what has been said. I am an eternal optimist, perhaps formed by my experiences, and I think that all sides are going to build momentum and bring this campaign to a successful conclusion.”

Referring to the thousands of maladministration complaints lodged against the DWP, he
gave this warning:

“I point out to the Minister, with all due respect, that if the maladministration cases are found against the Government, we could be looking at a huge settlement, so it may well be in the Minister’s interests and those of the Government to seek a parliamentary solution. These women, many of whom were in the Gallery today, deserve justice, and we are here to try to deliver that. I hope that Parliament will speak with one voice in support of the motion.”

Question for the House
The following question was put to the House, agreed and resolved:

“That this House calls on the Government to publish proposals to provide a nonmeans tested bridging solution for all women born on or after 6 April 1950 who are affected by changes to the State Pension age in the 1995 and 2011 Pension Acts.”

While this was a non-binding vote, the regularity with which the issue is raised in Parliament leaves the Government looking increasingly isolated in its failure to acknowledge and resolve the way in which a whole generation of women are bearing the brunt of mismanaged changes to their SPA. Their only ‘mistake’ was to be born in the 1950s.

The Government’s shame grows
Solent WASPI thanks all those MPs who expressed their solidarity with them on Thursday, and particularly Stephen Morgan for his continued interest in their campaign for state pension justice. The group said:

“Our support grows and the Government’s shame grows too. Its shame grows with every debate and missed opportunity to put this right.

“Our campaign goes on. We are not going away.”

Well done On The Wight for bringing this injustice to people’s attention.

This is affecting up to 3.8 million women nationwide and up to 10,000 women and their families on the island.