Ventnor take on Southampton University Hospitals in the Hampshire league 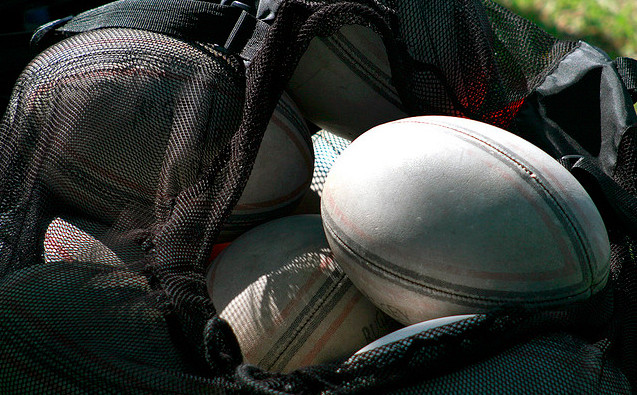 In difficult conditions, both teams played quality rugby, but it was Ventnor who came out of the blocks all-firing and drives from Ian Lane, Dean Magnurson and Chris Fletcher made space out wide, so that returning veteran, Todd Riches gave Jake Babington a chance to round his man and scorch up the left wing for an early score.

Back on attack
From the restart, Ventnor went back on attack and put the visitors under huge pressure – especially at scrum-time where Adam Pratt and Ben Savill (and later Tristan Price) put in great shifts.

Indeed Ventnor can consider themselves unlucky that the referee didn’t penalise the visitors front row for continually losing their bind and standing up thus giving their number-eight and scrum-half time to get the ball away.

Due to this pressure, Ventnor deservedly scored again when Southampton desperately cleared the ball from under their posts and full-back, Ross Harris, brought it straight back at pace.  Ed Blake kept the move going with a typical slanting break and, from the ensuing rucks, fly-half Sam Lines twisted over.

Ventnor came straight back and a beautifully delayed pass from Calvin Edwards set Babington away and the supporting Harris was unlucky to fumble his inside ball with the line inches away.

Half-time lead
Therefore half-time came with Ventnor leading 12 – 7.  The second half kicked off with SUH on the ascendancy as their fly-half began to pin Ventnor back into their own 22.

A try from a series of mauls was only prevented by a brilliant piece of defence from Riches, but then Ventnor lost Magnurson to a yellow card after an offence at a line-out, for which he was awarded the Red Funnel moment of the match.

The visitors piled on the pressure and, although Ventnor resisted the next driving maul, a breakaway led to a try which was converted.  From the resultant kick-off, Ventnor came straight back, first winning an attacking line-out and then, when the move broke down, a scrum against the head.  Malkin’s quick-fire service set his attack in motion and Griggs – on for Fletcher – made ground and a penalty resulted.  Riches calmly converted.

Defending manfully
Now leading by one point, Ventnor had to defend manfully and Harris pulled off an excellent blitz tackle in which he was injured and was replaced by Oscar Fitzgerald who demonstrated great maturity to clear his lines under huge pressure.  But once again, SUH went back to their basics and forced another attacking line-out maul which resulted in a try which was converted.

Thus, as time ran out, Ventnor were behind again and it could have been worse as SUH were awarded a penalty as the clock turned red.  Luckily the resultant kick hit the post and Ventnor escaped with the bonus point that their performance fully deserved.

Awards
A J Wells Man of the Match:  Andy Teague, for an all-action game in attack and defence

Red Funnel Moment of the Match:  Dean Magnurson for his yellow card

Report shared by James on behalf of Ventnor RFC. Ed

Image: sjbresnahan under CC BY 2.0