Ventnor Winter Gardens may open by next summer says owner

As part of a Community Partnership, students from the College are going to be brought in for work experience to help make the building habitable again following extensive vandalism. 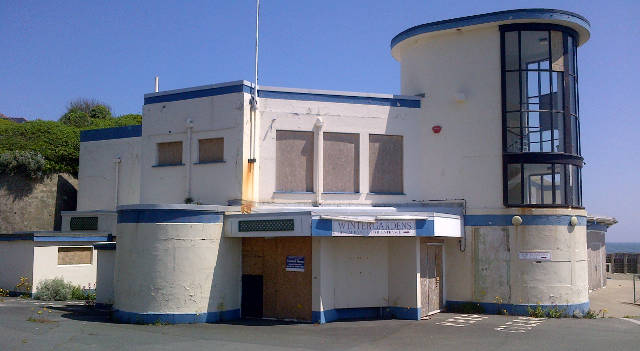 Following our report yesterday on the slow progress of development at the Ventnor Winter Gardens.

We’d put a number of questions to owner Kevin Sussmilch who this afternoon told OnTheWight,

“The Hambrough Group took possession from the IOW Council in January this year.

“Unfortunately due to unexpected changes within the business and the current economic climate it has meant a delay to the planned refurbishment and development of the site.

“We understand how frustrating this must be to the people of Ventnor and the Isle of Wight.”

He went on to explain plans for a short term measure,

“So whilst these plans have been put temporarily on hold, as a short term measure we have been working on another option to get the Winter Gardens open again as soon as possible so that at least it will be operating and be accessible to people.

“However, to do so will still involve an enormous amount of work due to the vandalism that has occurred.”

“To this end we have been in communication with the IOW College to work as Private / Community Partnership – whereby the students at the college, covering many different courses and faculties can actually participate in a major practical project, gaining them experience alongside their course work. This will be complemented with a normal skilled workforce where necessary.

“The first port of call being to get the roof repaired to stop the water ingress, due to the lead being stolen with further damage whilst still under the ownership of the IOW Council, and then to get the building dried out.”

He finished by saying that he hoped the works would be completed in order to have the building back in public use by the summer or earlier.

“Various contractors have visited the site to assess these works and in an ‘ideal world’ we would like to be starting this in January for an opening as soon as possible….in the summer or earlier?

“Once we have more information on when the work is due to commence we will ensure you are advised accordingly.”

This tone of mild-mannered, rather vague reassurance that opening is just around the corner, is familiar from the first time around. Only frequent and enthusiatic updatings volunteered by Sussmilch, not having to be dug up by OTW, might give cause to hope that things are any different now.

Vote Up00Vote Down
Joseph Moore
This just reads “I’m a bit skint. If I can get someone to do enough work to pass health and safety for as close to free as possible then maybe something will happen… don’t hold your breath, though.” I appreciate this is now private property, but the lack of voluntary communication keeping the townspeople up to date on what is still a major building in Ventnor adds… Read more »
Vote Up00Vote Down
the auditor
I am not convinced. The WG has been in a poor state of repair for many years and is an outstanding example of how an iconic art deco building can be the subject of systematic neglect by it’s owners, in this case the numerous reincarnations of the IW Council, who consistently place the blame at the feet of their (departed) predecessors. Sadly the WG is not the… Read more »
Vote Up00Vote Down
Cynic

“Open by the summer or earlier”… but in which year? In the meantime the development value of this prime site continues to increase.

It’s a bit like when you watch Grand Designs and the poor couple living in a caravan next to the building site are telling Kevin McCloud “Oh yes, we’ll definitely be in by Christmas…”

I see that “the current economic climate” has had something to do with the delay – all of 11 months ago Kevin could have had little idea, 4 years or so into the recession, that this would be a factor! No, either he is an incredibly uninformed businessman, or he is marvelling at the Island’s willingness to be strung along indefinitely.

I don’t know how true it is, but I was led to understand that the owner is connected to City trading.

If so, how could the current economic conditions be in any way surprising?

Kevin S. makes it clear he was talking about “the current economic climate” (ie. generally), quite separately from personal “unexpected changes within the business”.

What about the preceding phrase “Unfortunately due to unexpected changes within the business… ?

Vote Up00Vote Down
davimel
So in other words, ‘I can leave it a little longer and keep the plebs happy until it is not viable to repair and then its DEMO TIME!!’ I wonder how quickly the finances could be found to build a nice new Hotel on a cleared piece of land? Call me an old pessimist but we have been here before on many occasions especially when there is… Read more »
Vote Up00Vote Down
BigEars
Putting aside the push and pull of the main argument for a moment, am I the only person who sees a so-so art moderne building that was put up on the cheap. The main building, loosely inspired by the De La Warr Pavilion, is an outstanding example only insomuch as that, after being parred back at the design stage to meet the budget, is a shadow of… Read more »
Vote Up00Vote Down
tryme

If the building is unsuitable on many counts, I hope Kevin S. would cut to the chase if he had a wonderful design for a quite stunning replacement, and then I for one would be ready to be bowled over.

Vote Up00Vote Down
Larrythegreat
It is just another ex public asset taken over by a businessman full of promises that he spectacularly fails to fulfil. At least with this one, unlike the one barely a mile down the road it is clear to see what is happening……..NOTHING. As for the other, well what a shambles that is. Full of promises at public meetings and then manages to [part of comment removed… Read more »
Vote Up00Vote Down
The Auditor

Can’t see this being opened by July ….

How have the CP only now got hold of this, when OTW published the same info some time ago?

There’s nothing in the CP report that hasn’t already been covered in the article above. Can’t see why CP are claiming it’s Exclusive.