Ahead of the new ASDA being built, the road layout improvements will be carried out in phases and starts in August. 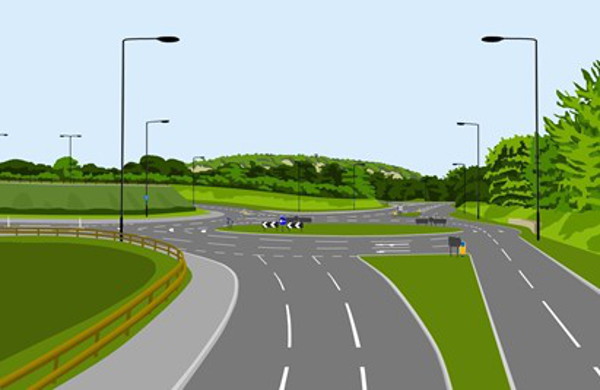 Work to facilitate development at St George’s Way is due to begin next month.

Island Roads will be delivering the highway improvements in the St George’s Way area of Newport, which ultimately will facilitate future development of the adjoining land.

The works will provide a roundabout on St George’s Way, adjacent to the football club, with a link road crossing Pan Lane, to the Pan Meadows development beyond.

Preliminary work was completed earlier in the year to ensure the removal of hedgerows in advance of the bird nesting season.

It also allowed for relocation of protected dormice and slow worms thought to be present on the site, following ecological studies.

The majority of work will be undertaken off the highway and, therefore, no significant disruption is anticipated on St George’s Way during the summer season.

Phase two to start later in the year
Phase two to be started later in the year will involve the construction of a roundabout on St George’s Way, together with improvements towards the St Georges Way/Medina Avenue roundabout, at the Morrisons/Marks and Spencer exit, connection of Pan Lane to the new road and signalisation of the Shide junction.

Pan Lane will also be closed for around four months to facilitate the work and details of necessary temporary traffic routing will be published when we are able to confirm the start date on these elements.

Due to the size and nature of this scheme, the works programme is subject to change but programme updates will be issued as each phase progresses.

“It is wonderful to see works beginning at this site. The benefits of the changes of the road network will not only improve traffic flow into and around Newport, but will enable better links with the Pan Meadows development, and access to the development site adjacent to the football club, which will enable future development and local employment opportunities.”

In response to the release, local councillor, Geoff Lumley, shared this comment, Ed

“My residents who use Pan Lane and to a lesser extent those living on Medina Avenue/Shide Rd are going to face significant disruption for a four month period, probably from November.

“However, I believe that in the long run it is to the benefit of all my residents who still want to see an ASDA in the town, to my residents currently trapped with only one way out on the Pan Meadows development, for my Shide residents who will be able to exit Shide Road onto Blackwater Road more safely, and for all Shide residents walking into town with the provision of a pedestrian crossing near M&S.

“Given all these positives, I hope we can all bear with the disruption with good humour.”

Interesting lane layout if the image is the plan! Three lane approach from north (with the road continuation being the third exit), two from south, right-hand of which feeds four lanes! Two extra sets of traffic lights too I understand. When will the first accident be…?

I do hope ASDA are paying for all of the roadworks. no hope for us of any compensation for the loss of Pan Lane for 4 months though, and No Geoff, we don’t all want ASDA. none of us will eat anymore, the profits will go to Wal Mart, and our local shops will suffer.

Vote Up00Vote Down
nico
I always find it heart breaking to see a long established hedgerow destroyed, along with the pleasure of seasonal re-aquaintance with its changes. I’m also not a fan of huge new supermarkets and road systems, (traffic normally fills and then exceeds whatever space is made available for it). Were it anyone else other than Cllrs Jordan and Lumley recommending this venture, (Phil saying it is “wonderful”, no… Read more »
Vote Up00Vote Down
P.Clemson

Great news having Asda on the island,look at the jobs it would create.
Ggreat stuff.

In my opinion Asda will ruin Newport, people will stop using the shops & stores in the town, Asda will do what Tesco has done to Ryde, empty the town.
I suppose the people who will lose their jobs in Newport can always find employment it Asda.