Dave Stewart, IW Council leader, is pitching to the Government for the Isle of Wight to be the first area in the country to test the whole community for Covid-19 – and use a mobile App to show C19 status. OnTheWight has a podcast with him on the details 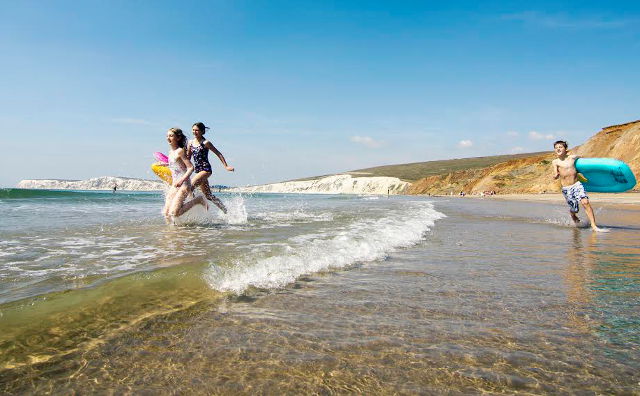 “If we can identify who has and who hasn’t got the virus – with modern technology and Apps and things, we could manage a potential to keep a check on people and allow people to have the freedom by using Apps.”

Stewart: “We should be exploring as soon as we can”
He went on to explain that it could include, “checking people coming off the ferry”.

With the tourism sector in mind, Dave went on to add that they wanted to,

Being more innovative
Keen to explore the role technology can have in moving forward, Dave told OnTheWight,

“We want to get out of a lock up in a safe way, so we’re not repeating the virus all over – we’ll follow the government guidance obviously – but because we’re an Island, we can do things a little bit differently and a bit more innovatively, I think it’d be great.”

Dave said they’ve been thinking through a range of ideas with believes that tech companies on the Island could be part of the solution,

“We’ve some amazing tech companies on the Island and I know they will come up with all sorts of ways and ideas.”

Stewart: “We’re in a new world”
Everyone wants to get back to normal life, he said, but added,

“It’s not just going to disappear unfortunately – we are in a new world, so we have to think how we would do that. If we had a spike in reported cases we could look at stepping back a bit – Apps – we would make that mandatory maybe. We’d say, you need a smart technology.”

He said the use of an App would ultimately help boost the economy and,

“Start to allow us to travel – key workers, second home owners would need the use of an App – they’d have to agree to isolate for 14 days.”

Stewart: “Like carrying a mini passport”
When OnTheWight asked how it would work, Dave Stewart replied,

“I suspect it’s like carrying a little mini passport really – this is my position, you can check it instantly.

“We’re all getting quite used to not using cash and spending money on our phones and all sorts of things, so if we could use the technology to track the movements and contacts, we start of be able to boost our economy.

“This is a good base to pilot things in different ways. We can stand up or close down things.”

Stewart: “If you don’t ask, you don’t get”
When asked if the conversation with Government had already started, he replied,

“I’ve already fed my thoughts into Bob Seely and I’ve got various other avenues of access to Government that I use and I’ll be trying to encourage them to at least to consider the potential.

“It’s them up to them at the end of the day, they control the actual decisions, but if you don’t ask, you don’t get.”

What are the chances of it happening?
OnTheWight asked Dave what the chances were of this happening. He replied,

“Well, I don’t know. The first thing you have to do is convince those that are in the decision making place that this might not be a bad idea, then they have to get their officers to explore the concept to see if they think it could work.

“The thing is, things are quite critical – there’s a lot of pressure on at the moment, everything is moving at a much faster pace, so if they think it’s viable, I would expect them to come back either directly, or through our MP and say, ‘OK – can we explore this a bit more’ and do a little bit more work begins the scenes.

“It’d be really nice if I could say in the not to distance future, I could say, you know what, we could be running as a pilot. We hope for that really.”

In a segment on the news programme, the regional variations of the infection rate of Coronavirus (Covid-19) was discussed and whether geographical locations being used in the next stage of combating the virus, former health secretary Jeremy Hunt has said that large scale contact tracing could be trialled in areas of low transmission, or perhaps places where the lockdown could be eased first.

“But if it means that a place like the Isle of Wight with a very controlled testing process that affects the Island it’s inevitably going to mean there’s a possibility that we as a local community can come out a bit earlier and maybe with some different approaches in a way that may well allow us to save our summer which is one of our priorities.”

Testing
Ross Hawkins, the reporter, goes on to say that any of this would depend on enough tests and staff, visitors would be kept away and the Government has already said it’s launched the largest diagnostic testing facility in British history.

As OnTheWight reported over the weekend, a drive-through testing facility is expected to open in Portsmouth this week, and OnTheWight are expecting news very soon about any plans for the Isle of Wight.

newest oldest most voted
Spartacus
Dave Stewart’s pilot pitch is vey high risk, compromising the health and well being of Island residents, don’t be fooled by this propaganda as he is trying to persuade us it’s in the interests of the Island, “We re in a new world” he states, we definitely are, a very dangerous one. “Save our Summer” he says, for who we ask? not Island residents that’s for sure… Read more »
Vote Up35-1Vote Down
alaniow

Don’t hold your breath waiting for a reply from this administration. They’re great at making promises but very poor at carrying things through. Those in most need i.e. the nursing homes, haven’t got the test they were promised over a month ago so so how are they going to find test kits for 140,000 people who are not actually threatened. It’s pie in the sky folks.

So who is going to fund the cost of all the smartphones for the App, for those that don’t have them? Answers on another success story such as the Floating Bridge.

Vote Up45-13Vote Down
Barefoot
On average, 79% of UK adults (18+) own a smartphone in 2019. The Office for National Statistics reported that 100% of 16-24-year-olds access Internet via a smartphone, just 40% of those aged 65+ do the same access. https://www.ons.gov.uk/peoplepopulationandcommunity/householdcharacteristics/homeinternetandsocialmediausage/datasets/internetaccesshouseholdsandindividualsreferencetables Add in those who value their privacy & won’t participate & its not viable…. Simple way to get the info – just ask the GP’s Currently 145,000 registered at… Read more »
Vote Up10-5Vote Down
Spartacus

This is some sort of Tory wet dream! I assume that if you don’t wish to use the ‘app’ then some sort of Gulag could be set up for you to live in?

How are you going to force visitors on ferries to take a test ? No test, no travel ? Sorry, I was tested last week….Sorry, I’m only here for a day…

Dave Stewart would pay them to come

He’d hand out signed photos of himself to attract them as he loves seeing his face in the limelight as we evidence every week in the CP. Best you’re not eating when you see it!

Do you really want to risk the lives of you and yours on this vage and poorly thought out plan?

Where’s the mandate from the island’s population to propose this?

With Seely, safely off the Island, supporting out Dave’s proposal, he must be posturing for some position in Government.

Exactly what gives him the right to put us at a high risk with this stupidity because this would expose us to another spike.

An absolute disgrace. Dangerous nonsense. When I heard Cllr Stewart on Radio 4 yesterday morning I could hardly believe his stupidity. Exactly when did he or Seely consult with local people before floating this with government? I am already getting residents contacting me appalled at what is being suggested.

Let’s come together in solidarity Geoff and get an Island wide petition and a formal letter sent from local politicians directly to Boris Jonson backing this up and to include a vote of no confidence in Dave Stewart and Bob Seely. They should resign over this mindless stupidity.

Vote Up7-2Vote Down
Tamara
I wonder if this has been thought through carefully enough. Glad to hear that Dave Stewart is concerned about the Island’s tourist industry, but there is no mention here of the far higher than average proportion of elderly and very vulnerable residents on the Island. As for second home owners, does he really think they will come here to self-isolate for 14 days? I imagine that most… Read more »
Vote Up43-20Vote Down
Spartacus

Who cares about the tourists, the priority is the safety of the Island popularion

Vote Up31-3Vote Down
Angela Hewitt
I am rendered almost speechless. But not quite. Can you imagine the stress and strain among the community not knowing if the silly pilot is working or failing!? I don’t want to be part of a Tory, Dave Stewart test bed experiment. The nation is already suffering one as it is. Wasting officer’s time researching a none starter. Although knowing how dumb the government is I wouldn’t… Read more »
Vote Up23-2Vote Down
JossS

What we want is a vaccine nothing else!

I have just listened to Dave Stewart’s interview with Simon. Is it conceivable that he has been spending too much time in the company of David Icke?

Yeah they both live on Planet Zanussi perhaps we can send them back!