The Isle of Wight council had said they would veto nominations for Floaty McFloatface in the new floating bridge naming competition. A petition calling for a u-turn gained over 1,600 signatures in just a few hours, so they have. 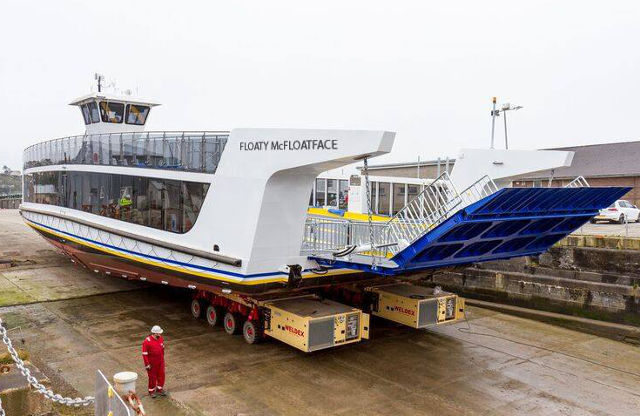 The Isle of Wight council has done a u-turn and will now be allowing Floaty McFloatface to be included in the nominations for a new name for the Cowes floating bridge.

At last full council, Cllr Chris Whitehouse suggested the naming competition, and a week later a press release from the council announced the news including the veto of the name ‘Floaty McFloatface’ saying

“And no, we won’t be calling it Floaty McFloatface! We’ll be vetoing that suggestion!”

1,600+ strong petition
Last night OnTheWight shared news of an online petition calling for Floaty McFloatface to be included in the competition and within hours gained over 1,600 signatures.

Council do about turn
Leader of the Isle of Wight council, Cllr Dave Stewart, has today announced a u-turn on the decision to not include Floaty McFloatface in the nominations.

“When my Administration says we’ll ask Island residents what they want to call the new floating bridge, we mean it. If Floaty McFloatface is out in front in terms of popularity, that suggestion will not be vetoed by officers. Today our cross-party Executive unanimously decided to overturn any decision by officers to rule out Floaty, or any other suggestion provided it isn’t offensive.

“Keep the names and the votes coming in, this competition for a new name for boring old Floating Bridge 6 could really put the Island on the map.”

Residents have until 7th April to make their suggestions via the council’s Facebook Page and the best six (not sure by whose standard) will then go to the public vote.

It looks as if it’s happened ! I love it.

Anything but that please, it was amusing 6 months ago, let’s not prove the Island is behind the times

Vote Up00Vote Down
I do not believe it

I also agree Julian.
By using this once vaguely amusing McFloaty name would, yet again, underline the complete lack of any original initiative on this island.
Ism not a great fan of royalty, but in keeping with the old tradition of female names for ships, I suggest ‘Princess Charlotte’.

I agree, “Behind the Times” sums up the island’s transport infrastructure to perfection.

It’s not behind the times – we’d be the first to name that name, and first by public vote as well, as opposed to NERC’s concession prize. Plus enjoy the campaign as even that can bring some positive attention (for a change!) to the island. Floaty is quite an endearing term anyway, which many of us in East Cowes and Cowes already use.

It was original when it was first mooted. Sadly it no longer is.

Lets call it what it is:

The island prides itself on creativity. Please let’s extend that to include originality. Recycling an old idea like this will make the news – but not in a positive way.

What about the “Andrew Turner Memorial Floating Bridge”? Just saying …..

Well said, what’s your idea by the way?

That was meant for Stephen

Maybe the people voting for the floaty name are doing it in the hope for floaty named ships, everywhere. Perhaps it isn’t a great opportunity to redefine the island based on the name of it’s ferry. SHOCK HORROR.

Floaty would be painfully naff. Something amusing by all means – I quite like Bridget – but this sounds like a child making the same joke long after it stopped being funny.

Bridge it. Bridget? why not BRIDGIT.

The chain ferry is not a ship and does not need a name.
IW councillors who vote for the stupid name should
watch their backs in May

I really wonder, sometimes, at the mentality of some people. Floaty McFloatface? is the most ridiculous suggestion and will do nothing for the credibility of the Isle of Wight.

“IUturnevery20minutes” might look nice on the side of the new chain ferry!

Vote Up00Vote Down
davee
To operate, the Medina Chain Ferry requires to carry a marine VHF radio. This needs a Ship Radio Licence to be legal, as do the crew require the Short Range Radio certificate to operate this radio. The chain ferry should have a clear and concise name as its working call sign. The chain ferry should not be an object of ridicule it is a vessel in its… Read more »
Vote Up00Vote Down
East Cowes
The name has no bearing on what it would be called over the radio. It’s also not a ship – it is an anchored vessel and disputably part of the road network as well. I think it’s a great name! Many “boats” have comical names; you only have to go down to any marina to see that. Everyone in East Cowes and Cowes already calls it the… Read more »
Vote Up00Vote Down
davee
It is against maritime law to make a radio transmission using an illegal callsign. The vessels international callsign or if known the vessels registered name must always be used. Mariners on the river always used the callsign “floating bridge” to make contact with the floating bridge. The bridge is restrained, not at anchor, because it is under way and making way from E. Cowes to Cowes and… Read more »
Vote Up00Vote Down
East Cowes
Legally, it is an “anchored vessel” because of the chains. Those of us familiar with the floating bridge know this from previous investigations, so on that point you are incorrect. And, yes, currently they call it “chain ferry” (not floating bridge like most of us call it) on marine radio, which they still could continue to call it – or floating bridge – regardless of whatever name… Read more »
Vote Up00Vote Down
Minnieb

It was a good joke once but now it’s over. Move on people, this is so passé.

I would have to agree with you Minnieb

Floaty McBoatface, just call it that. I’ve never used the floating bridge, but would make an effort to just for the fun of it. Or let’s just auction off the name to the highest bidder.