A new campaign aims to help householders learn about the right thing to do with their rubbish and reduce the amount of household waste that is fly tipped by rogue traders who offer to take people’s waste away for money and then dump it. 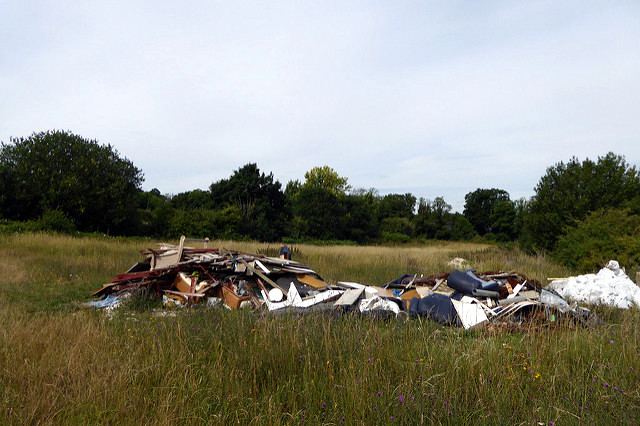 It’s a #CrimeNotToCare when it comes to getting rid of your rubbish is the message from the Isle of Wight Council and Keep Britain Tidy.

The council is linking up with a national campaign to tackle an issue that affects communities across the country.

#CrimeNotToCare aims to help householders learn about the right thing to do with their rubbish and to reduce the amount of household waste that is fly tipped by rogue traders who offer to take people’s waste away for money and then dump it.

The campaign aims to get the message across that if an individual’s waste is fly tipped, even if they gave it to a third party to dispose of, they can be prosecuted.

“Fly tipping is an unsightly and damaging crime that leads to the degradation of our natural environment here on the Island and we want to do all we can to continue the decline in fly tipping.

“This new campaign is aimed at those who do not realise that by using a ‘man in the van’ and not checking they have a valid waste carrier’s license, that more than likely, their rubbish will end up being fly tipped. The key message is that your rubbish is your responsibility to dispose of legally.”

“#CrimeNotToCare is an important campaign for our country and we are delighted that the Isle of Wight Council is partnering with us on it. There are almost a million fly tipping incidents in England every year and cleaning it all up costs us £50million a year.

“It blights communities and our countryside and is a menace. We need the public to understand that their rubbish is their responsibility and they must do the right thing with it.

“Giving it to a ‘man with a van’ who offers to get rid of it cheaply could prove costly for people and result in them getting a criminal record. They have a duty of care and this campaign will help explain to them exactly what that is and how to protect themselves.”

A social media campaign with key messages will be running in June on the council’s Twitter and Facebook pages and posters and leaflets will be delivered to local communities via town and parish councils.

Report by Isle of Wight council, in their own words. Ed

Are the IWC living in a parallel universe? Is this the council that has drastically reduced the tip opening hours?

Tip open hours decreased = more fly tipping, be it by public rubbish bins which are more overflowing than ever or just dumped.

Ther’s more rubbish inside County Hall than outside these days.

Vote Up37-1Vote Down
gravdub4
The council just can’t or won’t work it out can they. Open the place when WE are able to use it to OUR times, and stop screwing people to use it just because they’ve got a van, stop screwing council tax payers after you just put up all their council tax and the fly tipping will be less of a problem. People are fly tipping on a… Read more »
Vote Up24-2Vote Down