At the recent announcement of new trains for Island Line, Isle of Wight MP Bob Seely raised several issues with the Transport Minister, including Undercliff Drive, cross-Solent ferries, a fixed link and an improved rail and cycle network. 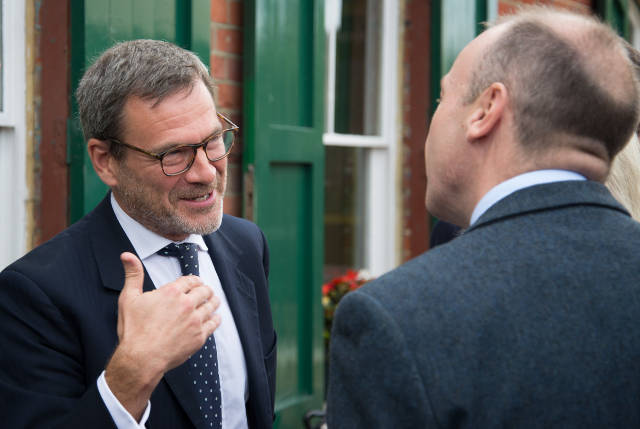 Making the most of a Ministerial visit to the Island this month, MP Bob Seely took the opportunity to raise the profile of other important Island issues with Transport Minister Chris Heaton-Harris.

“I would like to thank the Minister for coming to visit the Island and agreeing to give us £26m to keep our railway open.

“I raised a number of other transport-related issues that the Minister and his department may be able to help us with and I look forward to having further meetings and correspondence with him to take these issues forward.

“I hope that this is the start of many more improvements to our transport links on the Island.”

Viability of fixed link
During the meeting, Bob raised the controversial issue of a fixed link and sought the DfT’s views on the viability of this.

Bob also spoke to the Minister about options to improve cross-Solent travel services on the Island and the likelihood of reopening the A3055 – Undercliff Drive – between Niton and St Lawrence.

Improvements for cyclists and rail
Bob also asked for support to develop the West Wight cycle route, as well as others, and discussed the viability of extending the Island’s railway network – both electric and steam.

The Minister agreed to ask the DfT to look into the issues raised by Mr Seely.

Fixed Link?–you’d think there was an election coming up! Bye, Bye Robert.

Empty talk with a Government that may only have hours left in office. Hitherto Bob has made every effort to maintain the privileged status quo of ferry companies controlling and profitting by the movements of us islanders across the Solent

As soon as Johnson opens the Northern Ireland to Scotland bridge we will most likely to be next on the list.

Also I see no mention of the Abominable Floatie, why not?

Spot on get rid of these heartless parasites

Vote Up2-1Vote Down
Spartacus
Why oh why? are we still discussing the Undercliff Drive, it just doesn’t go away. It’s accepted by leading geologists and Government that it is one of the most vulnerable land slip areas in Europe and accepted there will be movement in the future so what’s really going on. It’s Dave Stewart’s personal mission to get this reopened regardless of the consequences, it’s mindless and selfish. Spend… Read more »
Vote Up5-2Vote Down
Alternative Perspective

Well done, you’ve got to be rolling about laughing right.