Isle of Wight’s speedway septet were in action last night in the Vince Mapley Memorial Trophy. 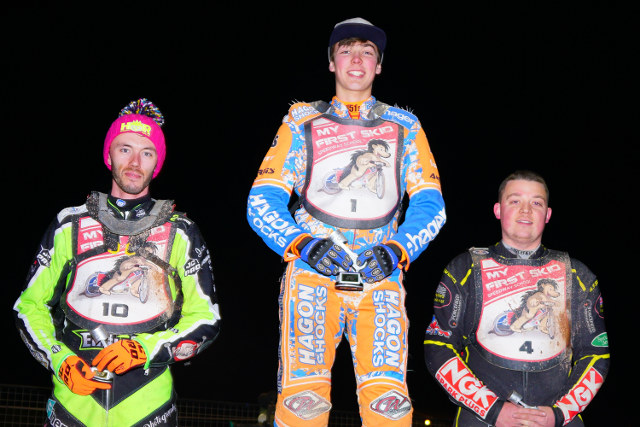 The Isle of Wight ‘Wightlink’ Warriors speedway septet were in action on Thursday evening in the Vince Mapley Memorial Trophy.

Club captain Ben Morley looked an odds-on favourite to retain the title that he took last season as the four finalists came to tapes.

Unscathed by fall
However lady luck deserted him as his rear wheel slid away at the end of lap three and he crashed to the track, surrendering what looked like a certain race win. Fortunately he was unscathed by the tumble.

Up to that point Morley had taken five quick heat wins in style, seeing off teammate Georgie Wood and the rest of the field in impressive fashion.

Precocious talent on a speedway bike
However the major beneficiary of his fall was young Jason Edwards from Mildenhall, who had joined the field at short notice when Danny Ayres called off with a recurrence of an ankle problem.

Edwards, who is just about to take his GCSE’s and a precocious talent on a speedway bike, had ridden consistently all night and was most certainly worthy of his place in the final. Sitting in a comfortable second to Morley when the Warrior fell, the youngster eased passed the stricken rider to take the trophy outright.

Wood a classy capture
New Warrior Georgie Wood also showed up well and looks to be a classy capture. With six Warriors riders making the semi-finals, only Chris Widman struggled with mechanical problems looking to have disrupted his night.

Co-promoter Barry Bishop drew a number of positives from the Warriors first run out when he said,

“I couldn’t be happier and loved it all. I think it’s the biggest opening night crowd we have had whilst Martin and I have been promoting here. We had loads going on for everyone and a last race that will send the fans home talking about Ben’s bad luck. Overall I’m really happy with the squad as they bed in for 2019 and I can’t wait for the Under 21 Semi Final next Tuesday.”