Many thanks to Thomas Cowley from the Isle of Wight 4×4 Club for this report and video of last week’s trial. Thanks also to Allan Marsh for the pictures. Ed 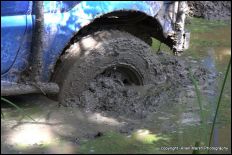 On Sunday afternoon, I was walking stoutly along just behind one of the competitor’s vehicles with a couple of other people, watching how they were driving a section. The lad next to me said ‘this has to be the only form of motorsport you can properly follow on foot’. Yes, I agreed ‘and that’s what makes it so accessible and fun’. How true.

The best way of both scoring and learning how to attack a 4×4 trials section is to be right there, close to the vehicle, but at a safe distance, so you can check lines and see when canes get clipped, or obliterated. Obviously, it also means you can banter with the driver as well, hopefully to put them off if you’re driving, to ensure a win. Huge thanks go out to Paul Blunden, who diligently scored the event this month.

The summer months make certain sites available, which can’t be used in the wet winter. Ningwood is one of those sites. 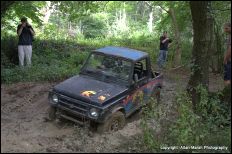 Summer means high attendance (for our events) and the August event saw a field of eleven drivers – plenty of people to get marshalled through eight competitive sections. As ever, the sections are untimed and the competition operates along similar rules to Radio4’s panel game, Just A Minute. Competitors must not stop on the course (no hesitation), keep as tightly to the course as possible (no deviation) and must not cross their tracks (no repetition). All this while driving through ten pairs of canes. The overall aim is to score the fewest points possible, with a zero, or ‘clear’ being awarded when no canes are touched.

With three out of the new competitors from the last report returning for the August trial, the draw of 4×4 trials is clearly as strong as ever. Alex Betteridge, Allan Marsh and Andrew Penketh were all back in their respective seats, doing battle with the canes again. Quite literally this month, as there seemed to be a particularly high rate of attrition in our cane stock this month.

Competing in Class 6 were three experienced hands: Steve Darch, in a tricked out Suzuki Jimny and Sean Belson and I in a stripped out Suzuki SJ, which mostly relies on lightness and a good set of tyres to deliver results on-section. After beating Belson by a single point in June there was hardly any element of grudge-match in the competition for Class 6 this month. 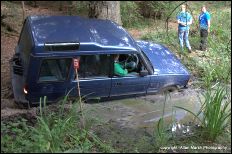 The Ningwood site sprawls across a large area, with new obstacles ready for the trial having bedded in for a month since the first of 2011’s driving days.

The day started with a section touring around the banks of the pond that VB featured last year, ending in a blast through a muddy section, to try and get to the top of the pond bank. No one made it, despite a range of different approaches. Team Penketh (Andrew and his father, Mike) were both attacking the course with much enthusiasm, in a Discovery bought only for the value of the engine and gearbox, due for transplant into another family motor. Steve Darch, usually very deft with his Jimny, surprisingly fumbled the first section, with axle differential lockers failing to get him across an odd choice of route.

The first section was then reversed, with Sean dropping a clanger and stalling over a couple of logs. Was it possible we would see a re-run of June’s trial? 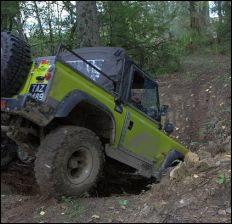 Robert Sexton was our first new entrant this month, campaigning a lightly breathed-on Discovery. Robert’s approach was measured and steady, aided by the low gearing and excellent axle articulation of his vehicle. It’s always great to see a new driver exploring how driving so slowly can provide such a big challenge and require such concentration. Robert rose to the challenge admirably, but was competing against team Penketh – two people who have been immersed in trialing for decades. He should beat them by some margin at the next event.

For the second set of sections, the group moved to the other moist area of the site. The route of the section was tight and with a couple of very deliberate challenges locked into an initially easy-looking route. Choice of line caught me out unexpectedly, evening up the Belson-Cowley battle, leaving all to play in the afternoon session.

Allan Marsh, in his Sportrak has learned from several trials outings and is now passing gate two in most sections. The mainly gentle terrain of Ningwood suiting the limited travel of his Sportrak seemingly much better than previous venues. Thankfully it’s a vehicle which can be shoved out of most stuck situations by three or four well built shoulders at one end.

The father-son battle taking place alongside that of the Penkeths was ended prematurely this month, with a rare mechanical failure putting Nick Archer out of contention in the battle between him and his Son Stuart. This well-equipped pair battle it out in Class 4 most months, with Mitsubishi mechanicals propelling both of them. 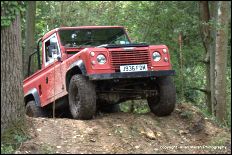 Stephen Griffin, the month’s second new entrant into the discipline was proving that trialing isn’t just for old Land Rovers. His smart 55-plate Jeep was being driven hard, as the manufacturer intended. More experience will deliver a sterner challenge to the Archers in coming months.

The purpose-built obstacles in a newly opened section of derelict woodland provided a very different set of challenges for the competitors. Steep gradients, sharp angle changes and deliberately challenging side-slopes were built into sections designed to confuse and challenge all drivers.

Mike Penketh failed to clamber cleanly out of the six foot deep big dipper, clattering a large number of points on to his score sheet. Sean singularly failed to escape from a side-slope obstacle, walloping the front corner of the SJ on a tree, and entering a large haul of points on to his card. His position in the standings being worsened again by taking a wrong route halfway through the final section. 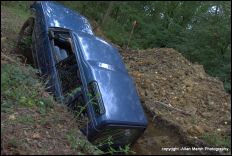 Stuart Archer got caught out unexpectedly on the final section of the day, but still claimed the Class 4 win in his Pajero. Andrew Penketh scooped a win in Class 5, six points clear of his father. His driving through the day not quite adhering to the maxim ‘drive it like you stole it’, but more like drive it like your father paid two hundred quid for it, which, of course he had.

Class 6 came down to a single point again this month, between Steve Darch and I. Poor route choice had nailed a chunk of points to both our score sheets on different sections, but some focused and determined driving just saw me pull in the Class 6 win. No doubt there will be another grudge match on in the October trial.

Finally, with a dirty great grin on his face and a set of utterly destroyed low-hanging rear lights on his Sportrak from the steep angles in the courses of the afternoon was Allan Marsh. Winning a convincing victory and also bringing up the tail-end of the field in a list of one entrant, in Class 3. Allan adds another choice sound bite on which to finish this month’s report ‘it’s been just epic today’.

The September event will be back at Ningwood on September 11th. This is the most important event in the Isle of Wight 4×4 Club’s calendar – our Charity Driving Action Day. Not only will the large Ningwood site be opened up for anyone to try out their 4×4 off-road, there will also be passenger rides available in Sean Belson’s hardcore comp-safari racer.

Find us online
For full details of the event check out the club’s Website and Facebook page.

All are welcome, whether spectating, driving, or wanting a high speed ride in the passenger seat of a proven race motor. The proceeds will be split between the Mountbatten Hospice and the Hants & IW Air Ambulance. We look forward to seeing you there!

great report and an even better day, well done Thomas

just one thing the lad walking alongside him is old enough to be his grandad ,ME

Doh – thought it was one of your lads who said that!

Guess you sound vaguely the same :-)

mrs also said it was great for spectators as well ,good fun to watch idiots trying to make cars do thing they really shoudn’t be able to do

It’s certainly a novel way of ploughing up the countryside and using (and probably spilling) a lot of fuel and oil. A wonderful poke in the eye for the Eco-Island zealots.

Thanks for your concern.

The club has a spill kit present at the event and the competing vehicles are scrutineered prior to the event starting, to ensure they are continent and safe.

In the 20 or so years I’ve been trialling I can’t remember any fuel spills and only a couple of minor oil spills where transfer boxes have failed.