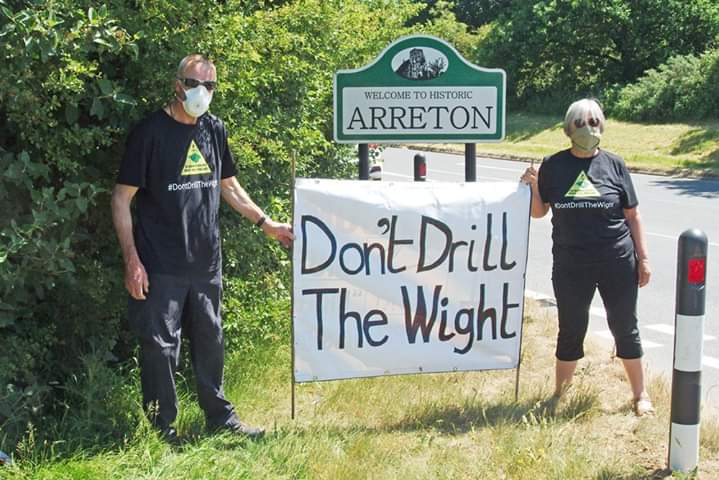 News shared by Don’t Drill The Wight. In their own words. Ed

Isle of Wight campaigners are calling for an urgent rethink on the active public consultation for UKOG oil drilling on farm land outside of Arreton.

With only three weeks to go until the consultation deadline, the Isle of Wight council offices and libraries remain closed, public meetings are banned, and there can be no compulsory site meeting by members of the Isle of Wight Council Planning Committee.

The entire process is left to virtual meetings and social media – and yet will determine the future of acres of countryside at the heart of the Isle of Wight for twenty years or more.

Medland: An attack on our very democracy
Cllr John Medland (Freshwater South), a supporter of the Don’t Drill The Wight campaign, said,

“Given all these obstacles it is a wonder that any but the most familiar with the inner workings of the planning system will make any comment or objection.

“Forcing such a critical consultation into an exclusively virtual sphere, with no public meetings or documents to handle, is an attack on our very democracy.”

Lowthion: The Island is last place that should be planning to drill for oil
Vix Lowthion, the IW Green Party spokesperson, continued,

“The Isle of Wight is considered to be one of the most famous tourist locations on the planet. We are a designated UNESCO Biosphere due to its unique rich ecological pattern of landscapes and bio-diversity of species, with an internationally protected coastline and estuaries and much of our land declared as an ‘Area of Outstanding Natural Beauty’.

“In July 2019 the Isle of Wight Council declared a ‘Climate Emergency’.   Only one year on, the Island is the last place that should be planning to drill for oil.”

Extend the consultation
Campaigners are urging the Isle of Wight Council to extend the consultation process into the autumn, to properly promote it through website and virtual channels, and to ensure that the usual statutory access routes to paper documents are protected.

By Don’t Drill the Wight

newest oldest most voted
Benny C
And apart from a self publicising platform, Councillors, who sit on the planning Committee and ultimately can make these decisions , do what exactly? Refusals then go to appeal, where inadequate refusals are overturned. Why don’t we ever see Councillors organising and DELIVERING refusal strategies which PERMANENTLY stop back door consents? If ever there were a good reason to spend islanders money on a wise cause it’s… Read more »
Vote Up21-1Vote Down
Benny C
There’s always one negative, Or maybe it’s Councillor Churchman voting the wrong ways gain. No, hang on, she’d have to agree with me to do that! “Ooh it’s all so confusing, By the way, can I claim these nice Rich Tea biscuits on expenses? Have we finished yet? I’m due on the radio at 7. Or is it 8? Oh well. Nice trousers Ian, where did you… Read more »
Vote Up70Vote Down
Angela Hewitt
Agree, agree, agree Benny C. I see no evidence that any single councilor has the nouse, integrity, personal authority, power, to do anything other than grand stand their own ego’s. They don’t ask questions, they don’t read papers, they ignore letters from the public, (Seely also), they don’t understand what is going on. I can’t stand Donald Trump. He is a loose cannon. But he exercises power… Read more »
Vote Up18-2Vote Down
Spartacus

Let’s ensure we get rid of them at election time.