Two ‘super trawlers’ have been moving around waters between Isle of Wight and Sussex over the last couple of weeks. A petition has been launched calling for them to be banned and removed 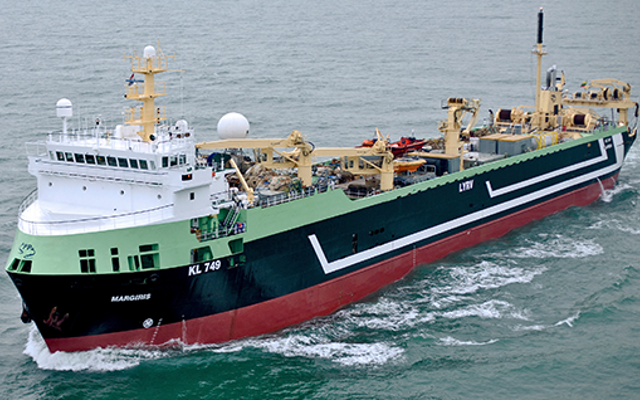 An online petition has been launched calling on the Government to ban ‘super trawlers’ such as the FV Margiris from fishing in waters off the Isle of Wight.

According to the excellent MarineTraffic Website, Margiris – the world’s second largest fishing vessel – and its sister ship, Annie Hillina, have been spotted off the waters of the south coast between the Solent and Sussex over the past three weeks.

Margiris, the second largest trawler in the world, was spotted off the coast of the Isle of Wight at the end of September.

The UK Government should work internationally to ban these trawlers and remove them from UK waters.

MMO: No infringements of fishing regulations
A spokesperson for the Marine Management Organisation say the vessel is fishing for pelagic species such as horse mackerel and pilchards and point out that methods of fishing “are controlled by technical rules imposed by the EU to ensure fishing practices are carried out sustainably and with minimum impact to the environment”.

“No infringements of fishing regulations were found.”

They go on to add that the vessel is fishing legally in the UK EEZ in line with the appropriate EU regulations and authorisations which currently apply.

Owners claim sustainable and responsible fishing
The Dutch company who own the vessel, Parlevliet and van der Plas, say the size of the vessels is not related to their catching power, but due to the on-board processing and storage facilities.

They also claim fish shoals are located through the use of echograms and nets are towed just below the water surface, “without causing damage to the sea bed or disturbing the ecological system”.

Concern from environmentalists
According to Portsmouth News a spokesman for the Blue Planet Society believe Margiris and Annie Hillina are targeting mackerel off Sussex, which they say will put them in contact with short-beaked common dolphins, endangered bluefin tuna and overfished sea bass.

Several constituents have raised concerns with me about the Lithuanian trawler, Margiris, spotted in, or near, IOW waters during the last week and the potential effect on our marine life and fishing.

I have written to DEFRA asking questions about the legality of this vessel being here.

When we leave the EU I want our fishery policy to preserve our fish stocks and protect our marine environment better.

You can track the movements of Margiris and Annie Hillina via the brilliant Marine Traffic Website. It is now positioned directly south of Bognor Regis.

If only Nigel Farage, the MEP for Fisheries turned up at more than one of the 43 or so meetings he didn’t bother to show his face to….