During the last five decades, the Isle of Wight has seen 13 high-speed vessels come and go to the Red Funnel fleet, starting with the hydrofoils, through to the waterjet propelled Red Jet fleet. 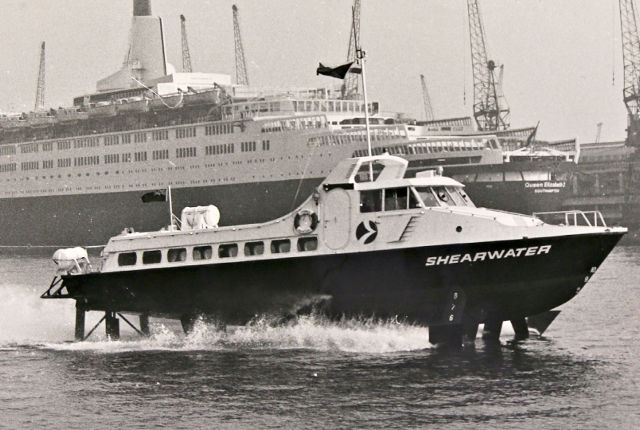 Red Funnel is celebrating 50 years of continuous high-speed service between Southampton and West Cowes this year. To mark the milestone, Red Funnel is proud to be the headline sponsor of this year’s Red Funnel Fireworks at Cowes Week, which will light up the skies over the Solent later this week (Friday 16 August), as well as offering two party cruises promising the best view of the action.

Opening up the archives
As nostalgia of the anniversary sets in, the original Isle of Wight ferry company has delved into its extensive archives to explore how its high-speed ferries have changed over the years and decades.

Over the past 50 years, Red Funnel has welcomed 13 high-speed ferries into its fleet to serve the 11.7 miles route, starting with the hydrofoil Shearwater ferries.

Shearwater fleet
Shearwater (pictured above) entered service on 5 May 1969 and could carry 54 passengers. She was closely followed by Shearwater 2 in 1970, Shearwater 3 in 1972 and Shearwater 4 in 1973.

Shearwater 5 and Shearwater 6 joined the Red Funnel fleet in 1980 and 1981 respectively and served the Southampton to West Cowes route for almost 20 years.

After Shearwater 6 was withdrawn from service in 1998, Shearwater 5 became the last of Red Funnel’s hydrofoil ferries in service, until she was retired in 2000.

Introduction of Red Jets
Red Funnel entered the next phase of high-speed travel in April 1991, with the introduction of its first Red Jet catamaran ferry, Red Jet 1. She was the first waterjet propelled high speed vessel on the Solent and could carry 120 passengers, which was later increased to 138 passengers. She was also the first of Red Funnel’s fleet to receive an official naming ceremony, being named by Lady Stuart at FBM’s yard in Cowes.

Red Jet 2 followed just two months later in June 1991, while Red Jet 3 joined the fleet in 1997. With an extra 52 seats, she helped to cope with the increasing commuter and tourist traffic.

It was some six years later that Red Jet 4 entered service in early 2003, which saw twice the capacity of Red Jets 1 and 2, with 271 seats and space for two wheelchairs. Red Jet 4 also offered a transformation in terms of ride comfort, speed and low wash, and became the fastest commercial passenger catamaran operating in the Solent.

In 2009, Red Funnel snapped up the opportunity to add a further Red Jet to its fleet, welcoming Red Jet 5 into service in August 2009 during Cowes Week. Seven years later, Red Jet 6 entered service. Built by Shemara Refit LLP in East Cowes on the Isle of Wight, she marked the return of fast ferry building in the UK.

In 2017, Red Funnel ordered its latest addition to its high-speed fleet, Red Jet 7. At 41.12 metres, Red Jet 7 is a sister vessel to Red Jet 6 with capacity for 275 passengers and two wheelchairs.

Marking the company’s second consecutive Island-based ship order, Red Jet 7 was built at Wight Shipyard in East Cowes and entered service in July 2018 after being named by her godmother, HRH The Duchess of Cornwall. The event was held just over two years after a similar royal naming ceremony was held for Red Jet 6, which was named by HRH The Princess Royal.

Each with a top speed of 38 knots, they transport thousands of passengers between Southampton and West Cowes in just 25 minutes and offer amenities including onboard Wi-Fi, hot and cold refreshments and air conditioning.

“2019 marks our 50th anniversary of high-speed service between Southampton and West Cowes. During the course of these five decades, we’ve seen 13 high-speed vessels come and go to the Red Funnel fleet, starting with the hydrofoils (Shearwater 1-6), through to the waterjet propelled Red Jet fleet (1-7).

“It is fantastic to look back and see the progression both the company and ferry industry as a whole, has made during this time, with all efforts focused on giving our customers the best travel experience possible.”

50 years of service and in 2019 you remain the only cross solent service not to transport bicycles, despite your promises to the contrary when building Redjet.