A lecture from a world authority on dinosaurs from the Natural History Museum, as well as a walking trail around Brighstone, are just two events celebrating the life of dinosaur pioneer, Rev William Fox. 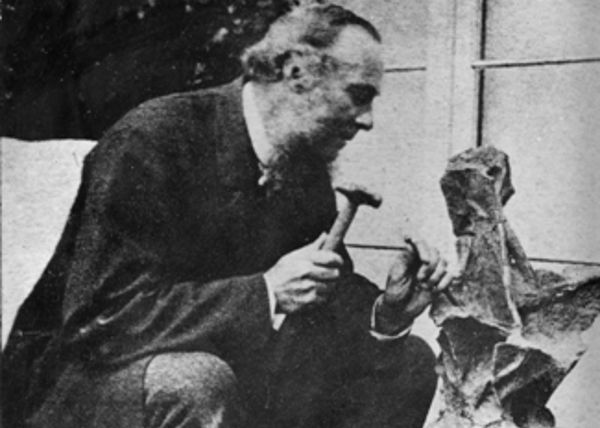 The council share details of these upcoming events. Ed

The dinosaur discoveries of remarkable Victorian clergyman, Rev William Fox, are to be celebrated by Dinosaur Isle Museum in partnership with the Royal Society later this month (26 and 27 May).

Rev Fox had four dinosaurs named after him, more than any other Englishman. Among his discoveries was one of the first almost complete dinosaurs, a partial skeleton of the small plant eating dinosaur, Hypsilophodon.

World expert on recent advances
The first event at Brighstone this month, on the evening of 26 May, will feature Professor Paul Barrett, a world authority on dinosaurs from the Natural History Museum in London, giving a lecture at the Wilberforce Hall on recent advances in the study of dinosaurs.

On Saturday 27 May, there will be the launch of the Fox Trail, a new walking trail around Brighstone following routes that Rev Fox may have used between the village and the cliffs where he made his discoveries.

Professor Paul Barrett is author of hundreds of scientific papers and books on dinosaurs, and has travelled the world collecting bones and studying fossils. He is co-author of a recent paper in the scientific journal Nature which overturns the understanding of the classification on dinosaurs – so the lecture will be an opportunity to learn about cutting-edge dinosaur research.

Support from Royal Society
Dinosaur Isle Museum at Sandown is arranging the events thanks to the Royal Society’s Local Heroes scheme – which provides funding for exhibitions and events that reveal stories of scientific brilliance.

In addition to the events, visitors to Dinosaur Isle Museum will be able to see some of Fox’s original fossils which will be on loan from the Natural History Museum – and also fossils found in the grounds of his former home in Brighstone.

All events are free, but booking is essential by telephoning Dinosaur Isle on (01983) 404344. Copies of a map will be available as free downloads from the Dinosaur Isle website www.dinosaurisle.com

“Dinosaur Isle Museum holds a globally important fossil collection, with the Island one of the richest dinosaur localities in the world. This forthcoming weekend of events is an opportunity for Island residents to learn more about our wonderful heritage cared for by the Isle of Wight Council. We will be following this event with an annual lecture, called the Fox Lecture, at which we will be inviting a leading palaeontologist to speak.”

Life in Brighstone
Rev Fox touched the lives of his contemporary villagers in Brighstone, in what was then a remote and isolated coastal community.

Today his barely marked grave and an improvised plaque are all that remain to mark the life of a man whose discoveries made the Isle of Wight synonymous with dinosaurs, and recognised as the richest source of dinosaur remains in Europe.

Fox’s dinosaurs
The four dinosaurs named after him were:

Described by Thomas Huxley, the dinosaur Hypsilophodon prompted Huxley to establish the Ornithopoda (bird-footed dinosaurs), for it and other bipedal herbivores. It was Hypsilophodon’s, light-build and bird-like anatomy that started the debate on the relationship between dinosaurs and birds.

Hypsilophodon has influenced the history of the understanding of how dinosaurs lived, having been interpreted firstly as arboreal, and subsequently as a bipedal runner. It was one of the first dinosaurs studied in detail during the great renaissance in dinosaur science in the 1970s, contributing to the modern understanding of herbivorous dinosaur evolution and biology.

Filed under: Brighstone, Island-wide, What's On