Alliance invite all to meeting on 30th March

News in from the Isle of Wight Stop the Cuts Alliance of a forthcoming meeting. Ed 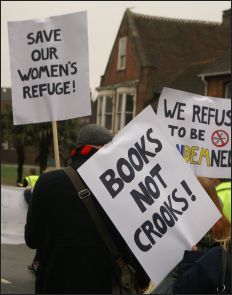 The Isle of Wight Stop the Cuts Alliance continuing campaign to preserve and improve public services begins a new chapter on Wednesday 30 March 2011.

Under the slogan of “Stop the Cuts – Heal the Island” the Alliance are holding a mass public meeting to discuss what action to take in defence of the Isle of Wight’s beleaguered NHS.

With the prospect of over 600 job losses and major changes to both hospital and residential care provision it is time for Island residents to act to save our health services.

“People power can make a difference”
Alliance spokesperson, Geoff Mason, said “Island residents were brilliant in their response to the Council’s swingeing cuts budget – they really showed that ‘people power’ could make a difference – the council could not ignore the public outcry and had to make many concessions which councillors never thought they would have to! Now it’s time for Islanders to step forward again, this time in defence of our great National Health Service – we can make a difference and ensure that we retain a health service that is the envy of the rest of the world.”

The meeting, set to commence at 7.15pm, will be held at the Riverside Centre in Newport, scene of the public meeting in January which saw the birth of the Alliance.

Guest speakers from the Island’s Patient’s Council, the UNISON IOW healthcare branch and residential care establishments will address the meeting before discussion and debate is invited from those members of the public present.

The Alliance is continuing its campaign against cuts across all public services and will not lose sight of the damage being done to the Island by the recent Tory cuts budget – the council still remain under close scrutiny and continued public pressure.

8 Comments on "Stop The Cuts – Heal The Island Say Alliance"

Now that the IOW Council have decided to sign up to a ridiculous 25 year PFI road maintenance scheme costing 11 million pounds a year while at the same time closing public toilets, libraries, village schools and more, there should be a full scale investigation into their activities and decisions.

Vote Up00Vote Down
someone else

And that’s just this year!!

Only Â£11m? That’s much better than the Â£20m we are paying know. What a bargin; Overhauled roads for less money than we are paying now.

Â£20m a year spent on roads, that’s very funny Ron. You do realise that 1st April isn’t until next week.

With the stench oozing out of County Hall, pedestrians and protesters walking pass the building will soon be asked to cover their noses and mouths with a mask for health and safety reasons.

They have signed up to it because we will all have to drive further to find any of the facilities mentioned.It’s a sort of Eco-Island scheme,with decent roads we can have eco cars. Therefore anyone needing to drive will have a smaller carbon footprint.

I did post this but it seemed to have vanished, could someone explain why if the council tax is frozen country wide why my council tax has increased by Â£110 this year and I get a council rebate for being a carer?

It may be that your local council has increased the precept element of your council tax, as well as an increase in the Police element. Hope that helps.

PS. Looked for your other comment but couldn’t find it in moderation.