Cllr Matthew Price has spoken passionately against proposed housing plans for Seaclose Park, but his Conservative colleagues voted to defeat his call for a review of the proposals 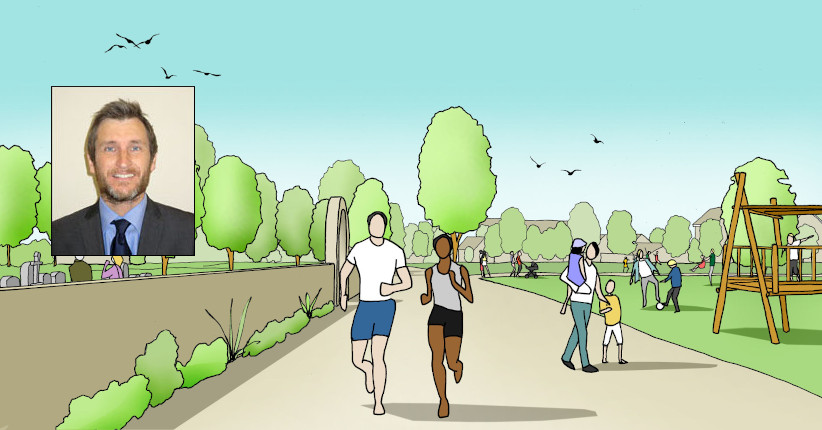 A review of the proposed housing on Seaclose Park — which could affect the Isle of Wight Festival — has been turned down by Isle of Wight councillors.

Plans to regenerate and transform Newport Harbour have come under fire recently due to the inclusion of housing on the entrance to Seaclose Park and the currently still standing, Fairlee Service Station.

Ward representative for Newport North, Cllr Matthew Price, has been calling for a change to the plans — removing more than 40 houses on the parkland — and wrote to the policy and scrutiny committee for neighbourhoods and regeneration asking for its support.

Price: Zero public support in Newport for this housing proposal
Cllr Price said although he did not have any issues with the rest of the masterplan for Newport Harbour, he objected to the houses as he wished to preserve the ‘most important and widely used parkland on the Island’ and asked for an ‘open-minded review’ into whether the development was suitable.

“Building houses on this land will not make any meaningful contribution to our shared aspirations to transform Newport Harbour.

“I continue to engage with residents and businesses of Newport North who are united in their opposition to housing on Seaclose Park.

“Irrespective of what the consultation outcomes may suggest, there is zero public support in Newport or across the Island for this housing proposal.

“It will cause irreversible damage to Seaclose, betraying this location for public recreational use, as it has been for generations.

“There is no doubt a residential development here would have an adverse effect on the Isle of Wight Festival. The festival must come into the equation when we talk about Seaclose Park.”

Jones-Evans: There is no harm in reflecting
Cllr Julie Jones-Evans, the representative for Newport Central and member of the committee, said Cllr Price had her full support and proposed a review into the suitability of the proposed allocation of land at the entrance of Seaclose Park ahead of any cabinet decision on the masterplan.

“We have to get this right — some housing would have been acceptable but the infill that we are getting isn’t.

“This is our major park and I have always said it needs to be shown as a gateway into Newport. It is a difficult balance. There is no harm in reflecting.”

Smart: Should be in a different place
Newport South representative, Cllr Shirley Smart, said she does not object to housing, but the positioning on that housing needs to be looked at.

“There are many brown and greenfield sites in and around Newport where we can put housing and be more suitable than here – I think it should be in a different place.”

Ashman: Caution committee’s views on value of this particular site
However, director of regeneration, Chris Ashman, said the owner of Fairlee Service Station had ‘expressed an interest in collaborating with the project’  and argued the entrance to Seaclose was ‘informal green space at best’ and not protected by planning restrictions.

“Members will be aware of the challenges we face with providing housing on the Island and these two sites, in particular, were identified as a priority with a housing association partner to deliver affordable housing for the people of Newport.

“So, I just caution again the committee’s views on the recommendation of the overall balance of the masterplan, the allocation of the units within it and the value of this particular site.”

Councillors on the regeneration committee were asked to vote on the proposed review into the housing but failed to garner the support need.

Of the five councillors, Cllrs Jones-Evans and Smart were for the review, but Cllrs Brian Tyndall, Chris Quirk and Michael Beston, all from the ruling Conservative administration, voted against and the motion fell.

The Harbour Masterplan is currently at the stage of potentially being adopted  and will go before the Isle of Wight Counci’ cabinet in August.

newest oldest most voted
YJC
Oh here we go again. I’ve heard Councillor Price speak a few times and he always made sense to me and he doesn’t seem to get any support. We should not be building on any more green spaces on the island. Wait until the effects of the pandemic have settled. It will change the high streets and how we buy. Online and staff working from home. So… Read more »
Vote Up570Vote Down
melting

Trust the conservatives to do as they want regardless of what the people want.

“ Cllrs Brian Tyndall, Chris Quirk and Michael Beston, all from the ruling Conservative administration” and all on the Planning Committee, where the Tories also have a majority. So Matt Price, it looks like Seaclose is doomed.

Very disappointed in the vote on this, but the fight is yet to begin…!! I will stop at nothing to prevent this from happening Geoff

You will have my total support

This just proves that there needs to be a better balance of Councillors on The IOW Planning Committee.
Both at Government level + here at Local level the Conservative Party are told how to vote on every every aspect.
Woe betide anyone going against them on behalf of the residents they represent.
Councillor Price, you have always been too nice to be a Conservative Councillor.

Vote Up340Vote Down
Angela Hewitt
The trouble with conservative councilors is they are not as bright as they think they are – just like our conservative government. They are mostly old in the tooth and are there to support their own egos or at least achieve something in their lives. They have no idea what representing the community means. They have probably never heard of biodiversity, Biosphere, ecology, autism, agenda 21, natural… Read more »
Vote Up10-6Vote Down