The long-expected official report on the collapse of the mezzanine deck on Wightlink’s St Helen ferry has been released. It’s stark reading, exposing long-running failures to conduct maintenance, despite being made aware of issues. Wightlink apologise. 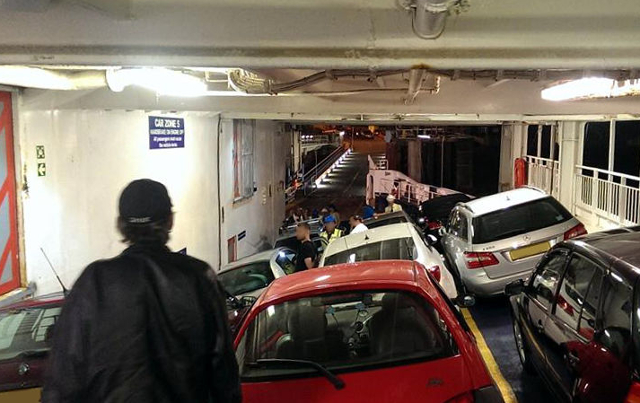 The Marine Accident Investigation Branch (MAIB) has published its report into the collapse of the mezzanine deck on Wightlink’s St Helen car ferry that took place in July 2014 and made worldwide news.

The report lays out long-running maintenance failures that led to the incident, which resulted in injuries to passengers and staff – a crewman was knocked unconscious – as well as damage to vehicles.

In the synopsis of the report, the investigator stated (our emphasis),

Wightlink was aware of many of the safety issues and contributing factors highlighted in this investigation report.

Of note: the absence of a formal mezzanine deck greasing routine had been subject to an internal safety management system non-conformity for over 2 years; the failure to address the non-conformity was highlighted by the Maritime and Coastguard Agency 9 months prior to the accident; and the failure to lubricate the steel wire lifting ropes was identified during 6-monthly examinations.

Given this knowledge, and the potential consequences of a rope parting, Wightlink demonstrated little or no appetite to allocate the resources necessary to resolve this long-standing issue.

This apparent lack of impetus was probably influenced by an over reliance on its 4-yearly wire rope replacement program and the Royal & Sun Alliance Engineering Inspection & Consultancy and the Maritime and Coastguard Agency’s reluctance to escalate the issue.

Deck allowed to “deteriorate to a dangerously unsafe condition”
The summary of the findings:

Wightlink’s response
Wightlink, who say they cooperated fully with the MAIB investigation and entirely accepts the recommendations of its report, also say they have has already implemented all of the MAIB’s recommendations.

“We apologise for the injuries caused to customers and staff that night at Fishbourne and for the damage to customers’ vehicles. Immediately after the incident we took all necessary measures to check and confirm that the mezzanine decks on our other vessels were safe for use. The mezzanine decks on St Helen were not used again and the ferry was sold to another operator in March 2015.

“MAIB reports are crucial to ensuring that the entire maritime industry learns the lessons from incidents at sea. We have improved our maintenance schedules after a comprehensive review of our systems and have now introduced a new electronic Planned Maintenance System to ensure nothing like this happens again.”

The following images (© Crown copyright) are from the MAIB Report on the investigation of the collapse of a mezzanine deck on board the roll-on roll-off passenger ferry St Helen Fishbourne Ferry Terminal, Isle of Wight on 18 July 2014 (embedded below). The report
OnTheWight has given you a summary of the finding above. To get the full picture please see the report embedded below. Click on the full screen icon to see larger version.

Images: © Crown copyright, 2016 Report on the investigation of the collapse of a mezzanine deck on board
the roll-on roll-off passenger ferry St Helen Fishbourne Ferry Terminal, Isle of Wight on 18 July 2014

newest oldest most voted
The Auditor

No surprises here, but a shocking report. It leads one to question general standards of maintenance in other area of the Wightlink fleet.

That’s a fairly shocking report. The management were aware of maintenence issues and did nothing. Why is there to be no legal action taken aginst the managers responsible for not ensuring the vessels safety?

Vote Up10Vote Down
motocrossvic
Interim Chief Executive John Burrows attempts to cast the net across the whole industry by stating the following: “MAIB reports are crucial to ensuring that the entire maritime industry learns the lessons from incidents at sea”. Unquote. However, this report was conducted on Wightlink’s failures, not the whole industry. In my opinion, it just underlines Wightlink’s typical arrogance in the way they deal with most issues. In… Read more »
Vote Up10Vote Down
Island Monkey

And the boss took three quarters of a million a year for this brilliant management?

Vote Up10Vote Down
davimel
Surely one of the biggest issues is that whilst Wightlink directors are sitting around the table slurping Champers and laughing at their million pound incomes they didn’t give a flying toss for their staff, customers or reputation! The corporate arrogance shown here is a warning sign to all ferry users.. they REALLY do not care! The clever tactic of selling off the in-house inspection team (who formed… Read more »
Vote Up10Vote Down
Anne

That gives little confidence to know that’s 2 years of neglect at the root cause. Really hope the company are truly committed to maintenance in the future.

Interesting to learn what the Health & Safety Executive – HSE – make of this management negligence and at what stage would corporate charges be brought.

Vote Up10Vote Down
Darcy
According to today’s BBC news report, it would appear that Wightlink believes it has absolved its responsibility by offering a few free ferry trips to those affected by its incompetence. One wonders how many free trips a fatality would have been worth. This action, if true, shows total contempt for its customers and demonstrates Wightlink’s belief that they are untouchable. I’m afraid it would have taken more… Read more »
Vote Up10Vote Down
jarundel

It would be interesting to know if the St Helen is maintained to a better standard in Italy. Does OTW have any connections with the local press in that area?

Who was the operations director at the time of the incident? Who has lost their job?

Personally I have for the last 3 years boycotted Wightlink because of their prices, their arrogance and the condition of their boats, when I last used them. If more people could boycott them we will see a different approach.

Vote Up10Vote Down
A.Pugin
Dear All, I am very sorry to say that I will not be continuing with Wightlink as I am unhappy to put my name towards various safety issues. Crew morale is very poor Fire equipment was inoperative Housekeeping poor Mezzanine deck operations continuing without crew confidence of success On tours of vessels, the tone is morose with no responsibility taken to improve Oil spills in both BCRs… Read more »
Vote Up10Vote Down
A.Pugin

In addition, none of the lifejackets provided for your safety have a self igniting light on them-as required by SOLAS, but not required because these vessels operate in Cat D waters.
This could result in a catestrophic failure in the event of abandonment-but is legal….for now.
We should expect full (voluntary) compliance from these companies on issues of safety.
(Speaking as a very qualified seafarer and auditor)

I believe it was reported there were no vehicles under the mezzanine floor when it collapsed. There is a large truck disembarking on the other side of the ferry, are you confusing it with that perhaps?

I was looking at the sequence of 3 pictures and mistaking the sign in the foreground for a vehicle – I stand corrected.

However, I still believe this incident could have been far worse. It was a lucky escape!

Vote Up10Vote Down
How Much!

To be fair to WightLink things are a bit tight on the financials!! This from the CP:

“Examination of the accounts for Wightlink show very high profits. The highest paid director received £714,000 plus pension contributions in 2015 (up from £382,000 the previous year), and bonuses worth well over £1m were paid to senior directors for their performance”

Vote Up00Vote Down
Fred Karno
What a truly awful and revolting business organisation. It is blatantly obvious that their main motivation is raking in massive profits, with their executives slobbering in the trough of excess, whilst slowly bleeding the Island and its residents and businesses to death. I have always thought that Wightlink is the worst company in this dual monopoly from hell, because their sea crossing routes are only half of… Read more »
Vote Up00Vote Down
Frank James

Another good argument for a nationalised, properly run and regulated, not for profit, integrated, national transport service.

Cheaper, safer, and better for our ailing environment.

Realistically Frank James – when do you think that is going to happen? That’s a genuine question. Do you actually believe that any Government is going to support that option?

Vote Up00Vote Down
Frank James
Yes is the answer to the second question, when any government gets on board with those of us who recognise the desirability of doing so. Which also answers the first question. All governments recently took a step in the right direction when they too acknowledged our ailing environment and our urgent need to reduce our carbon emissions. Travelling on a reliable affordable public transport service instead of… Read more »
Vote Up00Vote Down
Island Monkey

Horrible firm, dreadful overpaid people with no connection to Island life whatsoever. Remember how they kept increasing the fares, several times a year when the cost of fuel increased? How often did they cut fare prices when oil fell? As if you couldn’t guess.

Quite simply, ferries have massive maintenance costs and issues…many moving parts to go wrong that are in a highly corrosive environment. These disadvantages when compared to using a fixed link tunnel are massively expensive and can be dangerous. Automated toll tunnels have very few moving parts which are not subjected to a corrosive environment……ferries to the IOW are 19th century technology in a 21st century world.

… and let’s remember that their costs will increase when the oil price rises.

Talking about maintenance of the ferries does anybody know why the St Claire has been down at Falmouth docks since the 6th of January 2016?

OTW were given a resignation letter from a Wightlink Chief Officer, but refused to publish in case it damaged the Island’s reputation. It was all to do with safety-there is more to this story.

Vote Up00Vote Down
Simon Perry
Yes, I remember spending a considerable amount of time on it when you brought it to us. It was a while ago, so I don’t recall the exact reasons that we decided not to run with it in the end, but the one you’ve put forward sounds plausible, however I would have thought that wouldn’t have been the sole reason, but one of a number. Publishing news… Read more »
Vote Up00Vote Down
FerryMan

If you don’t like it move. You live on an Island so you have to accept that there are some issues when using vehicle ferries. Most people don’t care they just get on with it, we provide a service and you pay for it. It’s a business and we will continue to increase profits as much as possible, there’s nothing you can do about it.

What a pathetic comment from a Wightlink ‘spokesman’. Says it all!

Vote Up10Vote Down
I'll Get Flamed
Supporters of a FL include many people who contribute massively to the Island. We contribute financially and we contribute professionally (as Doctors, Nurses, Teachers, etc). We contribute socially to the welfare of the Island and to the cultural and sporting events. We have families on both sides of the Solent so moving to the mainland does not mean we can avoid the ferries. You have to accept… Read more »
Vote Up00Vote Down