The charter boat ran out of fuel and after the fuel hatch was opened the woman fell and hit her head. Cowes RNLI were able to attend and bring the passengers back on shore. 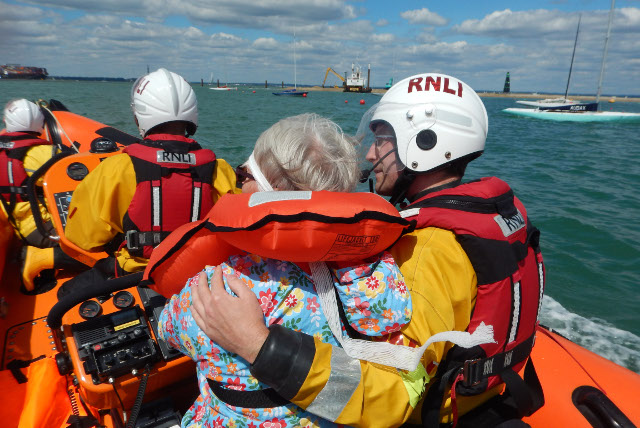 Thanks to George for this update on behalf of Cowes RNLI. Ed

A fishing trip on the Solent today for ten youngsters and adults came to an unwelcome halt when, first the boat ran out of fuel, and then a woman suffered a head injury.

Cowes lifeboat quickly arrived on the scene and the woman was taken to Trinity Landing, Cowes, to be met by coastguards and a friend who drove the woman on to St Mary’s Hospital, Newport for treatment.

The party, from Corf Scout Camp, Newtown, had gone on a day’s fishing aboard the 30 foot Harry Ho, but it had run out of fuel in Osborne Bay. It appears that after the fuel hatch was removed the woman fell and cut the back of her head. The boat anchored to await assistance.

Although the woman remained fully conscious she given a protective arm on the lifeboat by Will King, who as well as being a crewman is also a doctor.

The lifeboat, which launched at 12.29 pm, returned to station about 30 minutes later. Meanwhile the Harry Ho was refuelled by another boat.