The initial scope of the works was to refurbish the Cliff lift motor room and original, 1957, machinery. The programme now incorporates a complete overhaul of the lift cars, pulleys, winches and motor machinery, costing around £800,000. 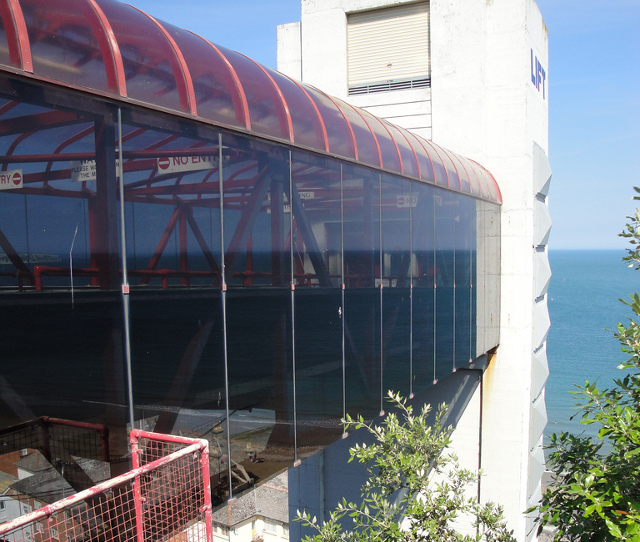 This in from the council in ttheir own words. Ed

The Isle of Wight Council has embarked on the first phase of its planned project to modernise the Shanklin Cliff Lift. This first phase of works will see all the ageing machinery and lift cars within the lift tower completely upgraded and modernised with brand new equipment; this will ensure that the lifts will be in a serviceable state for years to come.

It was originally anticipated that a lift would be open at Easter and close completely in mid-April to enable the replacement of the plant and machinery in the motor room. However, the recent discovery of a major electrical fault on the remaining operational lift car means that the lift is totally inoperable at present and, therefore, will not be able to open as planned for the Easter holidays. However, this complete closure has enabled works to begin ahead of schedule.

“This latest setback is a huge disappointment, but when you consider that the lifts date back to 1957 and that they are exposed to the elements every day, it’s not really surprising.

“What’s most irksome is the fact that the required parts are no longer made or stocked anywhere, so we cannot open the lift as originally planned. We deeply regret that there will not be a functioning lift in operation until the summer, but the early start on the programme gives us every opportunity to get ahead of the planned programme of works.”

Once the first lift opens, works to replace machinery on the second lift car will get underway.

In January, the council appointed contractors Temple Lifts to undertake the works to the motor room commencing after the Easter holidays.

The temporary bridge installed earlier last year will remain in place until next winter, when it will be replaced by a permanent structure. To enable the bridge works to begin without the potential delays due to weather over the winter months , the lift will be closed earlier than usual at the end of September.

“It has been well documented that Shanklin cliff lift has had a lot of problems with reliability and we had the issue with the previous walkway being closed for a period this last year for safety reasons. This is a very complex project that will take time and residents, tourists and businesses will need to accept there will be periods when the lift is not available.

“However, we recognise the importance of the lift during busy periods and this is why the programme has been specifically drawn up to ensure the lift will be opened for the main holidays this year.”

“I am pleased to see this project to support the Shanklin tourism industry is progressing and will help to protect the industry, and provide a great service for visitors to the town and beach for many, many years to come.”

“We welcome the commitment to reschedule the £800,000+ works to enable this iconic amenity to re-open as soon as possible, and that the substantive investment secures the longer term viability of this tourist attraction. However, are concerned that businesses, and the Council, will lose income while the lift is out of action.”

“We are working with Council Officers to arrange a meeting with the local Hotel Association and Esplanade based businesses, to ensure they are fully informed of the current situation, as well as briefed on the medium and long term plans for the lift.”

Should there be no major delays to the full project, it is anticipated the scheme will be completed and open for the 2017 East holiday period.

The overall cost of the works to the lift has been estimated up to £760,000 which has been funded from the council’s capital programme.

Image: © With kind permission of simonhaytack

I can see why the lift is important to many people but at a time money at the council is short is it a priority when services are being cut for vulnerable people?

Bring back the Dotto Train?

Vote Up10Vote Down
Tosh
Having started my electrical engineering apprenticeship in 1961 I found that most electrical motors and switch gear made in the 1950s was pretty well bomb prof and over engineered. That is why this equipment has lasted so long .I just wonder will this new equipment last for another 60 years . If it does then that will work out at £13,500 per year but I suspect it… Read more »
Vote Up10Vote Down
Terry Carpenter
From 1957 to now, the revenue generated from the cliff lift must have covered the original construction costs. The lift is a big asset to the town, uniting the upper town with the esplanade and beach facilities. Yes, the cost of restoration to full working order is far from cheap. But, it was the cost of doing little or nothing that allowed the deterioration to get into… Read more »
Vote Up10Vote Down
Tony Hagan

The lift makes £64,000 a year. So it can pay its way, if it had been maintained properly over the years it would not have needed this much spent on it. It is well used and is profitable. Ventnor Haven loses £100,000 a year. That’s where you should be looking to save money.

Vote Up10Vote Down
Darren Irving
No doubt any money made has been diverted without leaving money in the pot for maintenance. Not that I am laying blame for that at anyone’s door but I’m sure everyone else has thoughts and opinions on that! Tony, regarding your Ventnor Haven comment I’m not surprised! Don’t get me wrong I love Ventnor, being an ex Ventnor middle school goer I had spent many good times… Read more »
Vote Up10Vote Down
76offset
I read on bbc local news text that £800,000 was also awarded to south west local gov for improving leisure/tourism ameneties and they are spending it on such things as coastal paths upkeep, something to benefit a broad spread of people including residents. Instant decisions such as the beach lift renovation,presented as a fait accomplit, out of the blue, would be impressive, were it not mistaken –… Read more »
Vote Up10Vote Down
Darren Irving
There are many coastal and inland areas around the Island that have suffered erosion and degradation over the last few years, unfortunately although Shanklin beach is popular with the many people that profess it’s importance to our tourism trade there are many areas of now undiscoverable “jewels in the Crown” of the Island that many Island residents know of but can no longer access. Tourism is important… Read more »
Vote Up1-1Vote Down
Darren Irving

Oh and also when you come out of the cliff lift at Shanklin front it is not exactly picturesque!

Vote Up10Vote Down
gooze
£800K Really? I would imagine this news is comforting for those folks about to loose their income as a result of redundancies at the council. Can this sort of spending not be put on hold until a later date? Cutbacks are always difficult but surely this amount of money has to be factored into the budget deficit. I mean,how may trips would this lift have to make… Read more »
Vote Up00Vote Down
Tim

So its preferable to sack staff and have a Shanklin lift instead then? How weird

Waste of money. In these dire economic times it’s a luxury we can’t afford. We don’t need it. Before anyone gives my comment a *dislike*, my son is in a wheelchair and we’ve never used it. I don’t know anywhere else in the country that has one.

Vote Up00Vote Down
Darren Irving
So what are the figures for lift use per year, I have struggled to find an up to date definitive answer on passenger numbers. If they are set to spend £800k on it is that on top of the link bridge cost? I do hope that all the components for this build have been looked into and are suitable for such a harsh environment, especially in the… Read more »
Vote Up00Vote Down
Stewart Blackmore
I agree that the Shanklin lift is an iconic tourist attraction and, in normal times I would have no argument with the Council committing this money to upgrade it. But these are not normal times and I am left wondering just where this Council’s priorities lie. If the lift is absolutely essential to the life of Shanklin why cannot the Town Council take it over and seek… Read more »
Vote Up00Vote Down
beacher
I also find it difficult to see how the council can justify this expenditure at this time…..I fully understand it very important to the tourist industry at Shanklin….however I can’t understand why it should take precedence over helping funding shortfalls in social care etc where cuts are having dramatic effects on people lives and well- being. Note. Quoted figures are only estimates…with something if this age I… Read more »
Vote Up00Vote Down
Mark Francis

I find it difficult to believe that it is a “tourist attraction”.
In what way? Fans of New Brutalist architecture pining for the Tricorn Centre perhaps?
How much would it cost to demolish it?

Vote Up00Vote Down
billy builder
With respect, I don’t think that the lift in its own right is a tourist attraction, but it does make the seafront area more accessible to visitors in hotels at the top of the cliff. It would certainly be possible to demolish the structure, but what effect would that have on Shanklin as a holiday destination. As with any investment decision all aspects of the proposed investment… Read more »
Vote Up10Vote Down
Darren Irving

I also struggle to see why this cannot be reworked after all there are many people that safely restore bigger marvels of old school British engineering and I’m sure they don’t have such exorbitant budgets!
If they are going to start with the old health and safety argument then does that mean they had been operating it illegally before?

Looking into Temple Lifts the contractor that has been chosen for this contract I have discovered some alarming news!
Link to HSE website below:
http://press.hse.gov.uk/2015/company-sentenced-for-tower-bridge-lift-fall/

Do a Google search for Temple Lifts tower bridge and view the hse website listing.
They were fined £100k for poor maintenance procedures after a lift fell!

Oh, just realised I had posted a link previously but it is awaiting moderation!