Ann Widdecombe challenged after ‘lashing out’ at WASPI women

Solent WASPI officers say it’s not surprising that Ann Widdlecombe lashed out at WASPI women, as she was one of the ministers responsible for steering the 1995 SPA legislation. 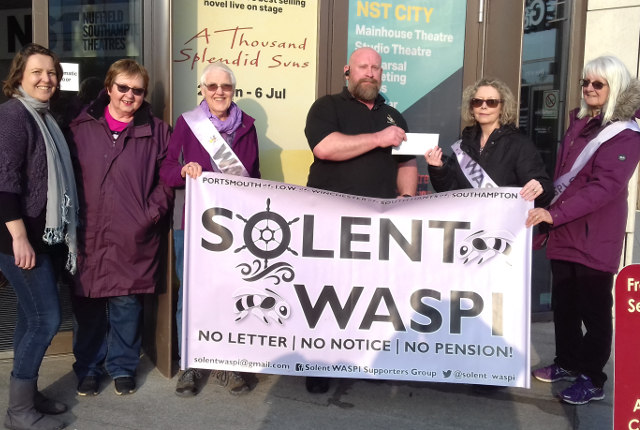 On 4th March 2019, ex-Government Minister turned media personality, Ann Widdecombe, lashed out at Women Against State Pension Inequality (WASPI) campaigners when she appeared on BBC television’s “Inside Out South-West”.

Eve’s story
She made her comments over tea and cakes hosted by Eve Wignall, in which they discussed the impact of State Pension Age (SPA) rises on women born in the 1950s.

Eve is a Devon-based WASPI woman who has lost out on tens of thousands of pounds of retirement income because she – like millions of others – was not given adequate notice of legislative changes adding up to an extra six years to her SPA.

What’s WASPI?
WASPI seeks fair transitional arrangements for all 1950s women affected by the Pensions Acts of 1995 and 2011.

It has a network of groups in the UK and overseas campaigning to secure state pension justice for this cohort of women. It does not ask for the SPA to revert to 60.

Widdecombe’s utopian picture
On the programme, Ms Widdecombe painted a Utopian picture of what life has been like for WASPI women. It was a ‘never had it so good’ world of free University education and final salary pension schemes.

It was as alien a world to many WASPI women as the ex-Minister’s astonishing depiction of us as “unreasonable, self indulgent and entitled”.

Ignoring the discrimination
Nothing could be further from the truth. Our life experience has been one of discrimination. It started with an education system that limited our career options, continued with reduced pay and pension opportunities – mainly due to work breaks to bring up families – and ended with a much-reduced income in retirement compared with men.

Indeed, far more women than men are likely to be totally dependent on their SP when they retire.

“We’ve been caught by this,” said Ms Widdecombe of the equalisation process. “We”? She, of course, has not been “caught” at all. She got her State Pension at 60. And, having been a Government Minister, she will have a good occupational pension too – not to mention her earning potential from television appearances and novel writing.

Eve dismissed
Ms Widdecombe dismissed Eve’s attempts to explain that we agree with SPA equalisation, but object to the lack of notice given to prepare for such a massive change.

“5 million darn letters” were sent out, she said. What she failed to explain, however, was that these were not in relation to the 1995 Pensions Act.

They were after the 2011 Pensions Act – a full 16 years later – which accelerated the whole equalisation process, hitting 1950s women for a second time and increasing their SPA – along with men – to 66.

“5 million darn letters” need context
When these letters arrived, it was the first many women knew about ANY change. By that time, they were in their late 50s and fast approaching the age at which they expected to retire.

It is disingenuous to suggest that “5 million darn letters” were sent without putting it in context and saying when. And some women still have not received any letter at all.

Solent WASPI Supporters’ Group – with members in Portsmouth, Southampton, South Hampshire and the Isle of Wight – took the opportunity to deliver a letter to her at the theatre refuting her assertions and setting the record straight.

Ex-minister responsible for steering 1995 SPA legislation through
Before the performance, members of the group staged a protest with their banner outside the theatre. Solent WASPI Supporters’ Group Coordinator, Shelagh Simmons, said:

“We hope our letter will make Ann Widdecombe reconsider her remarks. As one of the Ministers charged with steering through the 1995 SPA legislation, it is not surprising that she should robustly defend her record.

“However, she clearly has no insight into what our lives have been like. But while her depiction of us as selfish and privileged is unfair and untrue, her “Inside Out South-West” appearance has vindicated our campaign on two counts.

“First, she confirmed on television what we have always known – there was no personal notification of the SPA changes in a timely fashion that allowed adequate preparation for the shortfall in expected retirement income.

“The “5 million darn letters” that were sent were too “darn” little, too “darn” late. And second, her comments have demonstrated another sad truth; shameful ignorance on the part of SPA equalisation architects about the adverse impact the legislation would have on an already grossly disadvantaged generation of women.”

However, she also noted:

“A third consequence of the programme – and it is one to be welcomed – is the additional publicity and boost our already growing campaign has received, thanks to the ‘Widdecombe Effect’.”

newest oldest most voted
Colin
You wouldn’t really expect any different would you? She’s a politician first off so prone to not knowing how normal people live, secondly she’s a well off tory and thirdly the politicians just don’t care about ordinary people’s lives. With all these additional women not retiring, the net result is that there are fewer jobs for the young every year. But then it’s cheaper to pay unemployment… Read more »
Vote Up113-12Vote Down
minnieb
Ann is probably the most sensible and honest politician around recently. Of course she is right. Many women who could have retired at 60,including myself, could not because the pension would not have supported us, in my case once we were widowed, so worked on much longer and were grateful for the opportunity to do so. I am tired of these whingers who want equality but only… Read more »
Vote Up2-38Vote Down
islandwaspi
I’m sorry, but you seem to have missed the point. If you have read the article you should know we’re not against SPA equalisation. it’s not the principle we object to but the process. Women and their families needed time to prepare for such a loss of expected retirement income. “Honest” Ann wasn’t honest enough to say that the letters she referred to didn’t start to be… Read more »
Vote Up350Vote Down