Friends of The Isle of Wight Library Service

New Friends group set up to protect libraries on the Island

The three Island residents who plan to take part in legal action against the Isle of Wight council (over their decision to close libraries on the Island), have formed a new group. Dave Quigley tells us more. Ed 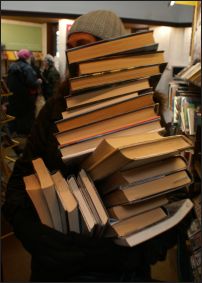 We three, Dave, Serena & Stewart, have taken the route of legal action as a last resort, the Council have refused to listen to the wishes of the Island, and as, according to the Constitution of the Council, as with all other local authorities it states that a councillors first duty is to his/her electorate whether they voted for him/her or not, we are left with no choice.

Of course we cannot say that we will win, however, having looked at precedents, particularly the Wirral MBC case of 2009 we, on the advice of our solicitors feel extremely confident that the Council will be found to be lacking in its duty under the Public Libraries and Museums Act 1964.

Residents of other counties taking similar action
There are similar actions being taken by groups in Somerset and Gloucestershire, and Oxfordshire has stopped (temporarily) its planned closures and announced a three month public consultation. Hertfordshire County Council has quote “agreed to changes in opening hours which will enable all 47 of the county’s branch libraries to remain open despite extreme financial pressures”.

“Flawed consultation”
Our so called consultation was flawed, the actual consultation document, although available in all libraries, was not advertised and not kept on show, the librarians were specifically told they were not to discuss the planned closures and staff redundancies with members of the public and to only show the document if specifically asked for it.

When the consultation period ended, the very next morning the result was announced when no member of the council had even had time to look at the results, never mind carry out an analysis of them. They eventually stated there were 1504 responses, this in itself is a deliberate manipulation of facts, they received a number of petitions containing almost 10,000 signatures, plus emails and letters to individual councillors, these were ignored, they actually had between 11,000, and 12,000 not 1504.

There are groups of friends being set up for several Island libraries, we feel that, in view of budget cuts to be made for at least each of the next three years it would be a good idea if a friends group was set up for each of the 11 libraries on the Island with a view to providing a forward base from which to fight the next time the council decides it wants to shut a few more branches. This is an essential tool, even if we are, as we expect, 100% successful with our challenge.

We have no wish to be involved in the running of these groups but are willing to act as a central point for information and the exchange of mutual help between groups.

8 Comments on "Friends of The Isle of Wight Library Service"

On behalf of those of us who care, well done and thank you. I expect that further support will materialise from “Alliance” islanders.

Well done Dave. How can people join you and help?

Vote Up00Vote Down
DaveQ
If your library hasn’t got a friends group, and as far as I know only Bembridge and Ventnor have formally set up groups, then if you can get a few of your local friends together and set up a group, even if your library is not closing, although the groups will each be independent and self controlling, in event of threats from the IWC in future budgets… Read more »
Vote Up00Vote Down
we5ive

Thank you Dave. How about the legal challenge? Do you still need more volunteers?

Hi we5ive, yes, perhaps you’d like to email me, I have told Sally & Simon at VB to give out my email if asked for it, then we can have a decent chat.

Vote Up00Vote Down
ccboyo
Hi Dave. More power to your elbow! I for one would be willing to contribute money from my limited pension, to help set up a fighting fund to progress your brave, legal challenge. The buck must stop here: no longer can we accept this ludicrous nonsense from the “cock-eyed Council.” If we can get enough Islanders to contribut Â£5 – Â£10 each we could have a good… Read more »
Vote Up00Vote Down
rosie
have said this all along, why couldnt the hours be spread more evenly to all 11 libraries, why give 50 hours to newport and we have none, thats not giving a fair and equal opportunity for everyone to have access to a library, surely for the time being until things improve we could all share on less , we are supposed to be the big society ,… Read more »
Vote Up00Vote Down
IslandHighFlyer

Well Done all! Keep going for us islanders.