The transport expert has spent four months gathering information and speaking to stakeholders to help inform the council’s response to the DfT consultation on the future of Island Line trains. 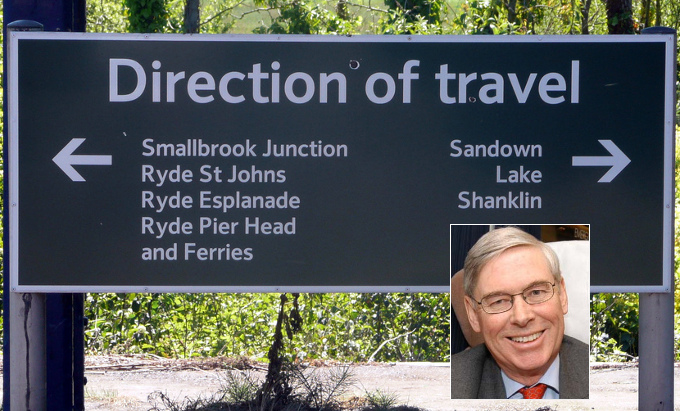 Christopher Garnett’s much anticipated report on the future of Island Line has been released today (Friday).

The transport expert was appointed by the Isle of Wight Council just short of four months ago to help inform the Island’s collective response to the Department for Transport consultation (which closes on 9th February) on the future of Island Line as part of the next south western rail franchise.

Options for future of Island Line
Christopher Garnett worked free of charge on the project which saw him consult with a wide variety of stakeholders.

His ‘options report’ delivered to the council on Thursday will now inform their consultation response to the DfT.

Highlights from the report found:

Alternative solution: A tramway
The report goes on to explore an alternative to the current heavy rail system, suggesting a tram system, as previously touted by Isle of Wight Conservative MP, Andrew Turner’s, transport advisor Nick Finney, who the CP claim introduced Christopher Garnett to the IWC.

Unresolved questions
The report does not have definitive answers to all the current challenges of Island Line, but the suggested alternative would need to comply with the following.

As previously reported, the DfT’s proposal, which they assured residents at the public meeting in December was not set in stone, suggested,

“The next operator will be required to work with the council, community and stakeholders to develop plans to turn the Island Line, which serves the Isle of Wight, into a separate and self-sustaining business during the life of the next franchise.”

‘Operator of last resort’
The council say they are,

“Seeking assurance from the government to guarantee that the rule of ‘operator of last resort’ should the local operator fail be applied to the Island Line should it be removed from the South Western franchise.

“Assurances that any costs in the event of failure, would not be born locally and that it would not become the responsibility of the Isle of Wight Council, but instead the government as per any other element of the national network to pick up the cost.”

“I would like to thank Christopher Garnett for his generous assistance in bringing together so many local residents with a vested interest in the successful future of Island Line in such a constructive way.

“It seems that we are all in general agreement; Island Line must remain, and that it might benefit from local management, which will provide better local opportunities for promotion and control, to enable the line to flourish and support the local economy.

“It is also essential that government gives us cast iron assurances that Island Line remains part of the nation rail network for timetabling and ticketing and has the same guarantees in relation to infrastructure as the rest of the network.”

“I just wanted to thank all the people and organisations who took part in this investigation; for their very open approach and real desire to get a really good outcome for the Isle of Wight.”

The report
To read the report in full see below. Click on the full screen icon to see larger version.

Thank God this guys services were for free!!
What has he said that we don’t already know?
No one is going to invest the huge amount of money to implement he’s suggestions, because there is never going to be any return in their investment.

How many trams carriages would be needed to replace the existing rail carriages on *each* run?

Would not the “Concerns over voltage drops on line” and “Full condition survey needed” also affect a tram system?

Vote Up00Vote Down
Colin
Nothing new there, then. The cause of the problem is still down to the government proposal to involve a stakeholder or community involvement railway and to cut the perceived loss on the line. Perhaps we should be told exactly who it is in the government that thinks involving a stakeholder or running a railway on community lines is the answer to the problem. Will all other loss… Read more »
Vote Up00Vote Down
Stephen
“Seeking assurance from the government to guarantee that the rule of ‘operator of last resort’ should the local operator fail be applied to the Island Line should it be removed from the South Western franchise. Surely this would be ‘Directly Operated Railways Ltd’ an agency/offshoot of the Department for Transport. DOR successfully ran the East Coast Mainline route when National Express, private Franchisee, failed to keep up… Read more »
Vote Up00Vote Down
Phil Marsh

I believe that Directly Operated Railways no longer exists, it was disbanded by the DfT!

I imagine we’ll be seeing the annual upriseing of Tranzwight in the C.P. next week

bring back the dotto trains

Vote Up00Vote Down
Terry Carpenter
There is a ‘land grab’ element within Mr Garnetts report. The site of the former junction curve on the Sandown to Newport line will no longer be required for use as an engineers materials facility. The sidings and materials on site will be given to the Isle of Wight Steam Railway,with removal at their expense. Leaving the land clear for housing development. I seem to remember that… Read more »
Vote Up00Vote Down
Chris
Terry CALM DOWN! If the IWSR extend to Ryde St Johns a level path would be constructed to the Island Line platform at the Esplanade end – everyone benefits. Incidentally Brading-Sandown was removed to allow a 20/20/20min service, but there wasn’t enough traffic for three trains per hour. D Stock might have a low roof, but the carriages are over 18m long – this causes a problem… Read more »
Vote Up00Vote Down
splinter

Simpler signalling, but wishes to run more services, not sure how this works?

It doesn’t – Chris Garnett mentions ‘line of sight’ signalling, but that is only relevant to double track tramways where vehicles follow each other in the same direction.

It’s absolute block, which is basic signalling, one train in one section at any time, if you wish to run more trains you have to shorten the sections, which requires more signals.

What’s being proposed is single track, to run more trains you need more loops for them to pass *as well* as more signalling so two services don’t enter the same section – this is true whether they are trams or trains.

Vote Up00Vote Down
beacher
And pigs might fly! I agree it’s not a great report. ( not necessarily the authors fault) it seems that the Island line has always been a side show so nobody cares. The current franchisee doesn’t run it as a separate cost centre (according to the report). So who really knows how much it cost to run and how much it loses. ( so where do the… Read more »
Vote Up00Vote Down
Richard

As a guard on Islandline I can assure you it’s well used and a very vital service.

Vote Up00Vote Down
beacher
Richard , I don’t doubt, it but why have none of the ‘ protagonists’ bothered to do the basics. How can we say to the government it’s a vital transport link without having some facts and figures. I am very much pro keeping it if we can, but the way both sides ( pro and against) are going it all seems to be opinion and best guesses……not… Read more »
Vote Up00Vote Down
Richard
Beachers The main reason for the lack of information is that every time KILF and others have asked for information we get told only what Stagecoah wish us to know, and every time we ask for them to eloborate, they hide behind corporate confidentiality. Let me give you one example that I can back up with evidence, as a guard one of my jobs is to check… Read more »
Vote Up00Vote Down
Terry Carpenter
Decades of under investment, rationalization and lack of vision or planning, has made our Railway into an unwanted orphan of the National Railway Network. Instaad of bringing it up to National standards of railway engineering, it will be reduced to even lower standards of engineering. It may be a self contained and isolated railway, but that is no excuse for reducing its future potential. It is part… Read more »
Vote Up00Vote Down