Amazing achievements by Isle of Wight athletes who took part in the 2019 Copenhagen Ironman Contest. 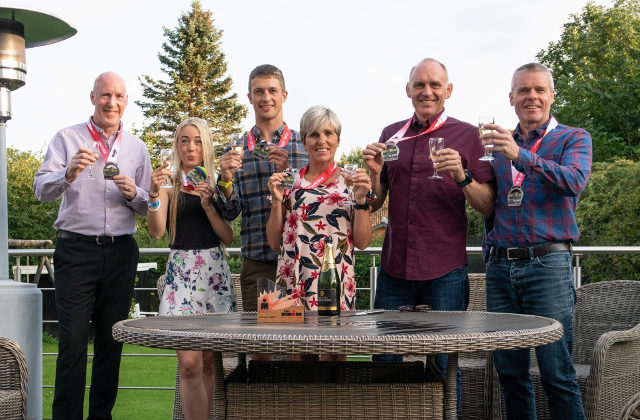 Mary, Joe, Josh and Laura were already ‘Ironmen’ and were looking to build on previous good races and times. Grant and Richard, having both completed 70.3 (middle distance) races, were taking the huge step up for the first time.

Months of training
The hard work started back in the dark days of January and for everyone it had gone well – we all kept relatively healthy and injury free so were all confident off the back of consistent training.

The only worry was the weather; keeping up with the latest forecast was the main pastime in the taper period leading up to race day. Strong winds and rain looked on the cards.

Early start
Alarms were set for 3:45am, though not really needed! After forcing some breakfast down we made the train journey from our house in the suburbs to the Amager area on Copenhagen’s eastern shore where the 2.2 mile swim was to take place in a sheltered lagoon in the Oresund Straight, the water separating the Baltic Sea and the North Sea, and Denmark from Sweden.
Fortunately the strong winds of the previous days had eased and the rain had held off so far.

We all had different start times as the swim was a rolling start by estimated swim speed. The pro women went off at 7am, then the fastest age-groupers, Richard was off at 7:20am  Josh and Laura were in the water 15 minutes later, Joe was off five minutes after that. Mary and Grant were in at around 7:50am – we had all made it to the start and were underway.

Richard is a strong, experienced swimmer and was hoping to be in a good position coming into T1. A touch of cramp in his calf slowed him slightly but still took a time of 1:04:41 into the transition. Josh took over 13 minutes off of his previous swim time to leave the water in 1:02:05.

112 miles by bike
The 112 mile bike course was two laps. The first part technical out of Copenhagen then fast straight roads up the eastern coast before turning inland and back to the city through the countryside.

Josh continued to power on and a bike time of 5:14:39 was 19 mins faster than his Vichy IM last year.

Richard started well on the bike, but unfortunately crashed after ten miles, gaining a few bruises and losing time, his Garmin and much of his fuelling. He was unable to do the ride he hoped to do but still finished in 6:03:56 which is a great time for a first IM as pacing is still part guesswork.

Laura’s year of solid bike training paid dividends as she smashed her Vichy time by 50 minutes to enter T2 in 6:05:48.

Grant held a lot back on the bike to ensure he continued his steady progress towards his first Ironman finish and recorded a 6:20:15 bike split.

Mary passed Grant near the end of the bike course to finish in 6:15:20, though a slower transition saw Grant leave before her.

Run a marathon
The 26.2 mile run was made up of four laps; looping around the centre of the city where supporters were packed several deep along the roadsides, then out and back along the river passing famous landmarks and even more cheering support and music.

The bad weather had held off for the swim and bike but it came in during the afternoon with heavy rain and windier conditions.

The rain cleared as the evening went on and we were all able to meet up after crossing the line and cheer on the others.

Josh finished his third Ironman distance race in a personal best time of 9:54:35.
Joe crossed the line in 10:58:52 with a pb in all three disciplines and a massive 57 minute PB overall in his forth full distance race.

Mary’s consistently paced race meant she was able to pass many of those who passed her earlier in the day, including others in the 55-59 age group, and moved into third place by the end. Her time of 12:15:12 was a pb and meant a trip into the city again the next day to collect her third place trophy at the official prize giving ceremony.

Richard was able to overcome his crash and continue on to hear the words ‘…you are an Ironman’ after 12:34:53 of racing.

Not far behind was Laura who beat her previous Ironman time by over an hour to finish in 12:37:50.

Months of consistent training meant Grant exceeded his pre-race expectations and finished in a great time of 12:40:21 to become an ‘Ironman’ for the first time.

Grant had a bottle of champagne given to him by Andy Dixon to crack open in the event of a successful trip. Four personal best times and two new Ironmen – it was opened, cheers!