Over 700 Islanders took part in the Coronavirus Impact Survey which found that 62% of those responding felt that we have ended the lockdown too early. Full results within 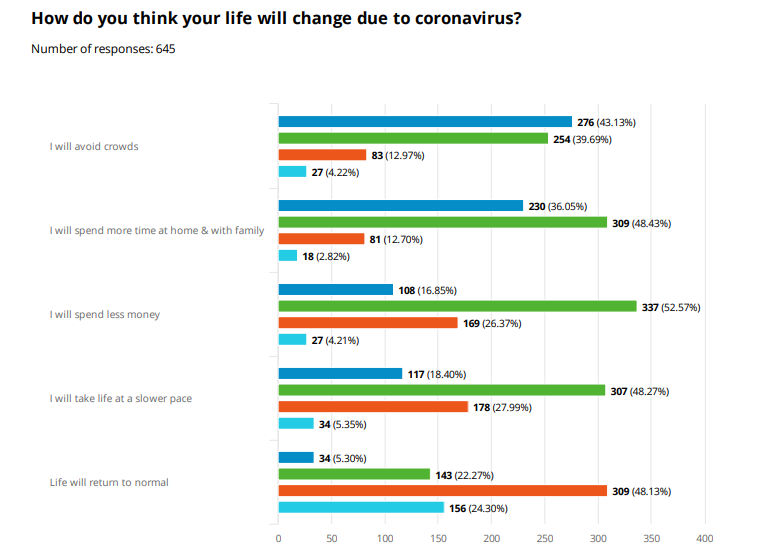 The results of the IW Green Party Coronavirus – May 2020 survey are in (see document below).

Over 700 responses were received, with questions covering the releasing of the lockdown, confidence in the government and the memories we will take with us.

“Hopefully we have now experienced the worst of this crisis and can begin to look forward to regaining some normality on a personal and community level.

“However, this survey illustrates the anger, anxiety and fears of people on the Isle of Wight after we witnessed an appalling national death total and too many of us losing our jobs and loved ones.

“Our fragile recovery must balance the economy and our mental and physical health in order to rebuild the confidence in our government, which has been broken by their mishandling of the crisis.”

Lockdown easing
62% of Islanders felt that we have ended the lockdown too early, with many commenting that “we need Track and Trace working properly” first and that the national death figures were too high.

Alternative views claimed that the lockdown was ‘against our civil liberties’. Only 40% of Islanders who completed the survey felt that we should be the pilot area for the ‘NHSX COVID19 App’, but others voiced privacy concerns and that our elderly population were not prepared for operating the smart phone app.

Health workers
When it comes to support for our healthworkers , 70.4% said that the government did not give carers and 60% NHS workers enough support.

Islanders said that they are ‘angry’ and ‘disgusted’ and “the lack of PPE and resulting deaths of NHS workers is a shameful statistic forever etched in this governments record”.

Schools
Children have been at the forefront of many of our concerns and a majority of Islanders believe it is too late for the wider opening of schools (57.8%) with many commenting that they felt they did not have enough information to feel confident that it would be safe. But families have done their best to remain positive.

30% of those who responded said that they were ‘amazed at how positive the children are’. But secondary pupils have been studying for more hours a day, with only 37% of primary students spending more than 3 hours a day on their schoolwork, compared with 57% of high school students.

Concerns
People’s experiences during lockdown have been very varied, with some enjoying the “slower pace of life and lack of stress from commuting” but others have been under real stress at home.

“It’s a nightmare. I’m a full-time carer for a disabled son and am terminally ill with heart failure. No good days.”

Causes of anxiety include delays for life-saving operations, financial worries and concerns about friends and family (29%).

New normal
Only 27% of those surveyed felt that life will return to normal, with an overwhelming majority (80%) saying that they will avoid crowds in future.

We have clearly missed time with those we love, and 86% resolve to spend more time with family in the future.

However, the hopes that once lockdown eases we will spend our way our of economic disaster look unlikely as 69% plan to spend less money after the covid19 crisis has passed.

Government
It’s bad news for Boris Johnson, as only 32% of those who responded to the survey believe that the government have handled the coronavirus crisis well. Explanations included that the government were too slow to lockdown, did not arrange enough PPE and that we should have closed our borders.

“The way the government has handled it is a total mess and embarrassment. I’m ashamed. They have a total lack of respect and concern for the public. For the government to ‘celebrate their success’ is a total joke.”

Memories
Those who have survived this national crisis will have strong memories of May 2020, which include but not limited to: video calls (40%), clapping for carers (38%), supermarket queues (35%) and the endeavours of Captain Tom Moore (33%). Sadly 5% of those who responded have lost a loved one and others expressed anger at the government as a lasting memory.

Hundreds of Islanders left messages, positive and negative, about this time of great need. Many have tried to see the benefits of lockdown:

“On a positive note, life has slowed down, loved ones have spent more time together. Families have had quality time and children have been far less stressed without the pressure of school.”

News shared by Vix Lowthion on behalf of the Isle of Wight Green Party. Ed

In some regards the Covid crisis has given us a taste of what a Green Party state would look like: no air travel, vast reduction in industrial production (lower emission levels), furlough (universal basic income and 4 day week) and the spectre of nosebleedingly high taxation to pay for it.

Don’t forget the use of a social conditioning app to keep people in line replicating the Chinese model. That will deny services for not having the ‘correct’ mindset, and the automatic deduction of points.

Whereas with the Tories we’ve got 60,000 excess deaths.

So, who chose the people for this survey. Always suspicious of Green Party and especially that loathsome Lowthion. Always pushing her agenda and never anything positive to say, or suggestions as to what we should be doing. Just like to scaremonger.

Vote Up26-6Vote Down
chausettes
It was a publicly available survey – nobody was chosen as far as I know. I have no affiliation to the Green Party and yet I saw it through social media. Not sure there was any specific agenda detectable in any of the questions I answered, other than asking about satisfaction with the current Government approach – for which it was possible to register positive and negative… Read more »
Vote Up5-6Vote Down
fedupbritain

It is probably fair to say that the Greens see themselves as the leading opposition party here even if that has never been the case in elections where they have only ever managed 3rd place in a GE and their support last time round was significantly down.

Opposition is opposition. Respondents are self-selecting and could therefore include people of all political persuasions.

Was this survey announced via OTW CP, or was it all via Greens mailing list and their FB/twitter friends/followers? It’s a bit like taking a survey in a butcher’s shop and asking ‘who likes sausages’ then claiming that 100% of the Island is pro-sausage.

Vote Up16-3Vote Down
chausettes
Firstly, I don’t know what distribution was included. But I suppose if people choose to exist in a bubble, then of course they run the risk of not seeing something that has limited circulation. I advocate following people and views that are not necessarily my own – including all the major party reps on the Island. Secondly, you are quite right: Butcher’s shop metaphors are pointless. We… Read more »
Vote Up60Vote Down
uosf9

Might also be worth pointing out that the ‘140,000’ you refer to would be a pipe-dream – it’s a survey, and does not require a compulsory response from everyone. There’s also the issue that of your estimated population figure, you’re including a sizeable number of children (many of whom are thankfully enjoying a childhood without having to think about party politics at age 7!)

Thanks Sally for the clarification