The banner project has been created in response to comments from Newport residents and businesses gathered as part of the Shaping Newport programme in 2017, where local people were concerned that Newport was losing its identity 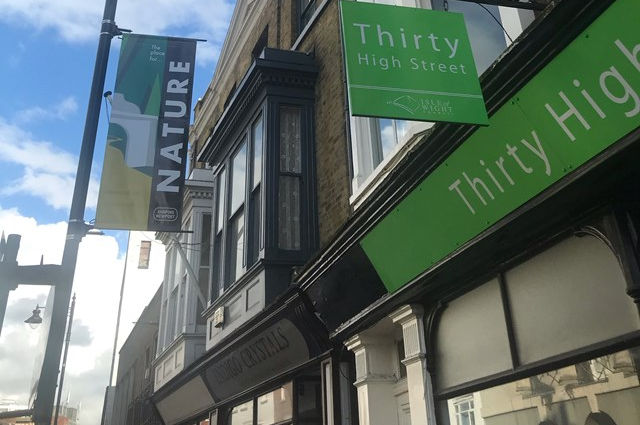 The flags were created by a Newport-based team from Solent Co, and installed by Island Roads staff this week.

Each one features a Newport landmark or building, including Watchbell Lane, St Thomas Minster, the Victoria Monument, the Guildhall and the Tudor Arch at Church Litten.

Reinforcing Newport’s identity
The banner project has been created in response to comments from Newport residents and businesses gathered as part of the Shaping Newport programme in 2017, where local people were concerned that Newport was losing its identity.

The banners highlight the range of attractions the town centre offers to help offset the increase in online shopping.

The Shaping Newport project
Shaping Newport is a partnership project between the Isle of Wight Council, Newport and Carisbrooke Parish Council and the Newport Business Association.

It forms part of the area regeneration programme for the Isle of Wight and has created the Place Plan for the County Town of Newport.

“As one of the founding members of the Newport Business Association, Solent was proud to work on this exciting and very visible aspect of the Shaping Newport campaign.

“We worked closely with the project team to create this original artwork inspired by both recognisable landmarks and the diverse range of carefully selected passion points that were highlighted as key representations of Newport.

“These banners around the town will highlight positive aspects of our county town, whilst bringing a splash of colour into the high street and visually representing and instilling a sense of pride for the Newport community.”

News shared by the press office on behalf of the Isle of Wight council. Ed

What do they say, the home of empty shops and high parking charges? They would have done better to drop the business rates and offer free parking.