The six man final race was undoubtedly one of the best races ever at the Smallbrook track. 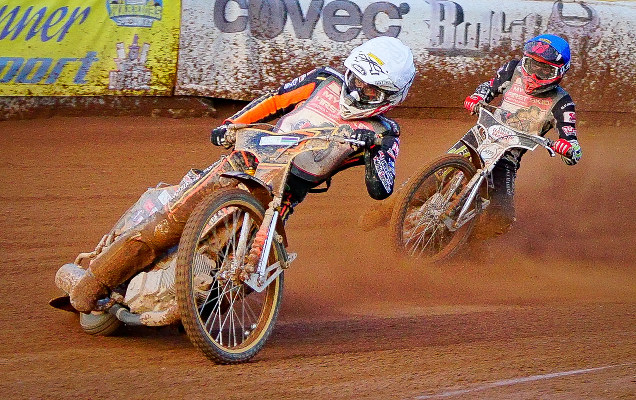 A fantastic night of cut and thrust speedway action saw Manchester based cheekie chappie Joe Lawlor take the spoils in the annual US style speedway challenge held at the Smallbrook Stadium in Ryde last night (Thursday).

Lawlor, who rides for Stoke in the National League, capped a thoroughly impressive overall performance by overcoming his fifteen metre handicap and five other riders in the Grand Final to win the meeting after expertly weaving his way through the traffic ahead of him and clinching victory on the last lap.

With the three back markers quickly catching their three advanced opponents, the racing that followed produced a marvellous series of passing and re-passing in elbow to elbow action and the bumper holiday crowd were gripped by the skill and trust that the competitors showed in each other.

Mixed fortunes for Warriors riders
On a night where all the riders deserve the highest praise, the Warriors riders had mixed fortunes. Chris Widman took full advantage of a beneficial draw to reach and win his semi-final before ending up fourth overall.

Scott Campos started slowly but two wins gave him a semi-final spot behind Widman before ending up in sixth place overall, whilst Connor King had another confidence building night with two great wins in the qualification stage before just missing out in his semi-final.

One rider not in the points was Wizard Chris Watts. This was a big step for a Development League rider; however he should hold his head up this morning as he was far from disgraced and contributed greatly to the entertainment.

Disqualified in semi-final
The biggest disappointment for the home fans came when Ben Morley was disqualified in his semi-final after tangling with the classy Connor Mountain.

Heading into the first bend on the second lap, Mountain looked to be trying an outside pass on Morley.

The riders appeared to touch in an innocent racing incident, Mountain fell and controversially the referee blamed the Island skipper and put him out of the race. An unsatisfactory end to Morley’s hopes. After treatment, Mountain was able to retake his place in the meeting and went on to pick up third place on the night after some more well executed overtaking in the Grand Final.

Former Warrior came second
Perhaps the surprise result was former Warrior Ryan Terry-Daley finishing second. Now racing for Leicester and another rider to enjoy the benefits of the handicap system, the blond speedster showed bags of determination and was only a whisker away from outright victory.

At the opposite end of the scale was Terry-Daley’s team mate at Leicester, Danyon Hume. One of the pre-meeting favourites, Hume found mechanical problems on both his bikes after the warm-up and was forced to withdraw without turning a wheel in anger.

Warriors co-promoter Barry Bishop was delighted with the way the meeting went as he said,

“What a terrific night overall. The racing was magical and the six rider final was compelling. The crowd were on the edge of their seats and I must compliment every rider here tonight on the mature and sensible way they approached this rather unusual meeting.

“Again, we had lots going on to keep everyone involved and I know our meeting sponsor Roger Munns from Wight Coast Holidays was absolutely delighted.”