Bournemouth council claim 5,000 jobs would be lost in Dorset if the Navitus Bay wind farm project goes ahead. 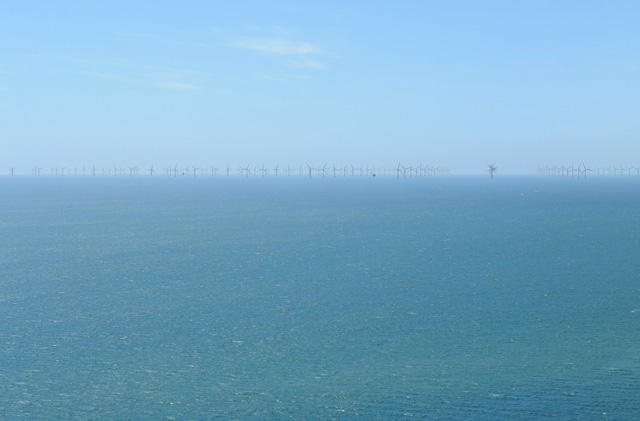 Following the news that MHI Vestas Offshore Wind have been selected as preferred bidder for the Navitus Bay Wind Farm, Bournemouth council have voiced their concerns.

“”Whilst we are of course pleased that Navitus Bay’s turbine blade contract on the Isle of Wight will help to support existing local jobs, we are concerned that no new local employment opportunities have been announced.”

Industrialising coastal setting will affect 5,000 jobs
Claiming 5,000 jobs would be lost in Dorset if the wind farm project goes ahead, Cllr Beesley went on to say,

“Navitus Bay continues to ignore the fact that almost 5,000 jobs will be lost across Dorset if its offshore wind farm is developed.

“Changing the core appeal of the tourism offer by industrialising this beautiful coastal setting with vast, highly visible turbines will have an unprecedented and deeply damaging effect on our local economy.

“The evidence shows that six million tourists will avoid Bournemouth while the wind farm is constructed. The region faces a total economic loss of £6.3 billion if this wind farm goes ahead. Countless businesses will be undermined and the Jurassic coast risks losing its UNESCO World Heritage Site status.

“Bournemouth Council remains deeply concerned about the overwhelming and detrimental impact Navitus Bay wind farm will have on the area’s core appeal and local economy.”

newest oldest most voted
Bazaldog
This is so untrue! I actually work in a support role during windfarm construction as a skipper on the crew transfer vessels, whilst I cannot comment on the merits and demerits of wind energy, I can certainly testify as to how areas are affected by the construction mob! Dead ports, such as Yarmouth which are turned over to recreational sailing become enlivened by the demand for shore… Read more »
Vote Up00Vote Down
Chris

How far off the coast is Sherringham Shoals? How visible is to from the coast?

I couldn’t say for certain, but around about 5-8 miles.

Well, even I’m surprised…Sherringham Shoal windfarm is 2.12 nm from the coast, just checked on the charts.

You need to magnify this thumbnail to see the ranks of turbines.

You’ll find the closest point to shore (NOT population) is 17Km or about 9 nm.
Even the company website puts it at between 17-23 Km see here: http://bit.ly/1KsszvB

Whoops, my bad….I was actually referring to Scroby Sands off Great Yarmouth. Sherringham is also a very popular attraction with its own visitors centre and attracts tourism….much the same as in Gt Yarmouth.
Apologies for the confusion.

Vote Up00Vote Down
Billothewisp
So you really meant Scroby Sands! Hardly Navitus Bay is it? Scroby Sands has a mere 30 turbines (not 121) Even then the Scroby Sands turbines are half the height of the monsters planned for Navitus. The swept area (the rotating bit that is most visible) is less than 25% of the Navitus turbines. Its maximum output is a pitiful 60MW True it is disgustingly close to… Read more »
Vote Up00Vote Down
block8

Another person who feels obliged to say something, anything ‘sensational’, once a camera is stuck in his face.

Happy to hear people express their concerns, but 5,000 jobs? £6.3 million? They cannot possibly have any idea.

Anyway I’m off to Scotland soon where there are lots of windfarms.

the ulterior motive is a ‘sweetener’ for Bournemouth from a multi million pound company
who will be next to claim?

Fisherman landowners and other marine users have all had meetings with Navitus Bay to discuss compensation for the disruption during the build I find it a bit strange that Bournemouth Council hasn’t.

Vote Up00Vote Down
The Sciolist
I hope it never happens, it would definitely be a blot on the seascape, highly visible and an inefficient waste of taxpayers money. The economic benefits quoted are nonsense, barely any maintenance is done, no jobs created and the vessels required will be far to large for Yarmouth’s piddly harbour. It certainly aint gonna happen that these yo-ho-ho sailors will be drinking ale and yarning in the… Read more »
Vote Up00Vote Down
Steve Goodman
What is happening is near panic about keeping the lights on and trying to maintain business as usual. And for a proper, permanent, blot on the seascape (rather than hopefully temporary turbines), look again at something like BP’s Gulf oil spill disaster (link to follow). For an inefficient waste of taxpayer’s money, start with the $10 million a minute the IMF say we are all paying to… Read more »
Vote Up00Vote Down
Steve Goodman

Vote Up00Vote Down
billy builder
The current annual green energy support by the UK is in the order of $6 billion a year to support 9% (at best) of our production. Scaling that to 90% of the worlds energy production, then the annual bill would be in the region of 7 trillion. Or 13 billion per minute to provide just the electrical power side of energy demand (ie it doesn’t include transport)… Read more »
Vote Up00Vote Down
Billy builder

I’m not panicking. I rely mostly on French nuclear energy, and will do for decades to come, it’s very reliable, safe and affordable.

The peak oil predictions have been proven to be wrong, sorry, but the anti lobby keeps crying wolf, no-one is really listening any-more. The BP contractors did mess up, but the effects have been largely exaggerated because so many people wanted compensayshun.

“I rely mostly on French nuclear energy, and will do for decades to come, it’s very reliable, safe and affordable.”

… and all the profits are channelled to the French State via EDF.

The Guardian and BBC? Hardly neutrals, they’re mostly discredited lefty propaganda organisations, worse even than the Daily Mail and Murdoch.

Vote Up00Vote Down
Tanja Rebel
Jobs or no jobs, as stated before, this offshore wind farm is too close to the World Heritage coastline and the wind turbines far too big. Placement is essential here: Move the turbines further out or put them along a less historic (tourism attractive) coastline. Sustainable solutions need to take into account their aesthetic value if they are to be truly sustainable. Vestas is a point in… Read more »
Vote Up00Vote Down
Cicero

To the Sciolist: Peak oil might be an illusion in your view, but if oil so abundant, then why have we started to resort to Tar Sand destruction and fracking? Just wondering…

By the way, if “lefty propaganda” means more respect and compassion for the vulnerable – including our planet herself – then I am all for it!

Vote Up00Vote Down
Stewart Blackmore
I read this thread last week and decided not to comment until I visited Lincolnshire at the weekend where, I knew, there are a number of wind farms both onshore and offshore. Lincolnshire is a flat, beautiful, expanse of countryside and, like the IOW, has a number of statutory protected areas including AONBs. My sister lives in a tiny village which is surrounded by several hundred wind… Read more »
Vote Up00Vote Down
ewald
The Green Party said that all since the 60’s “On the contrary, I was told, the opposite is the case. Tourists come to see the turbines and there has been absolutely no adverse impact on employment in the area” and it comes better: France is committed to reduce its nuclear production by 50% and set a target that 40% of electricity will come from renewable energy…. http://www.theclimategroup.org/what-we-do/news-and-blogs/renewables-must-deliver-almost-half-of-frances-power-by-2030-new-bill-decrees/… Read more »
Vote Up00Vote Down
billy builder
Stewart, for a change, I agree with you regarding the effect these turbines would have on the job prospects on IOW and Bournemouth, and do not believe that the presence of these turbines would have a negative impact on the coastline. However, I do not believe that off-shore wind is a cost effective means of producing energy, and that it is only viable with massive public subsidy.… Read more »
Vote Up00Vote Down
Cicero

How many people, do you think, will pay exorbitant ferry prices to see an offshore wind farm (50-50 Joint Venture between Eneco Wind UK Ltd (Eneco- a Dutch company- and EDF Energy Renewables.- French state-owned utility) that is some 12 nautical miles away from the coast?

Navitus claim it will not be an eyesore- so who will pay to see “not an eyesore”?

Vote Up00Vote Down
Cicero
Interesting! If one follows the money to find out how the Navitus project will be funded, it appears that “Those funds are likely to be procured by way of a combination of off balance sheet funding and project finance. It is anticipated the total Project construction costs will be in the region of £3 billion.” (from  NAVITUS BAY WIND PARK COMPULSORY ACQUISITION FUNDING STATEMENT Document 4.2 April… Read more »
Vote Up00Vote Down
Cicero

(per the Beeb today)

“Last month, the firm behind the planned project revealed it had decided to use fewer, higher more powerful turbines.
Its Navitus Bay plan A, costing £3.5bn, would see 121 8MW turbines each 200m (656ft) high, instead of a maximum of 194 less powerful options.

All local councils, except the Isle of Wight Council, are against the scheme which campaigners fear will hit tourism.”

I am happy to make a video recording directly underneath one of these large scale turbines if anybody is interested in the noise impact.
I have an app on my phone that gives a decibel reading as well, perhaps I could provide a figure underneath the turbine compared to one at the shore? I know it’s not very scientific, but it may assist people in forming their opinion?