The fire that reportedly started in a ground-floor space between two hotels resulted in mainland fire and ambulance crews having to cross the Solent to support our local crews. 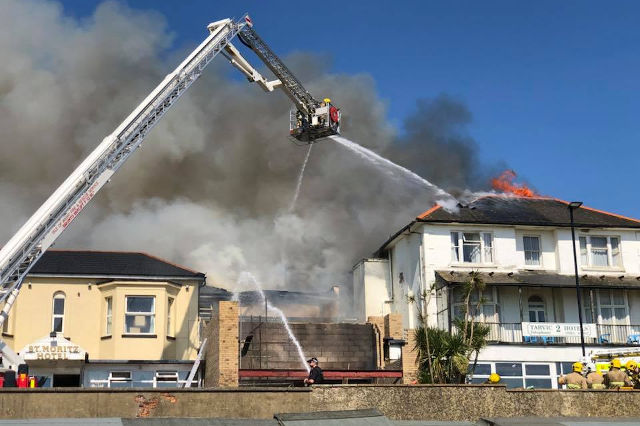 The Isle of Wight Fire and Rescue Service received over 30 calls (the first at 10.53am) on Sunday morning with reports of a fire at a Sandown Hotel.

Emergency crews from across the Island rushed to the fire at Tarvic 2 Hotel on Culver Parade, with support from mainland fire and ambulance service crews.

Over 50 firefighters
At one point there were around 50 firefighters on the scene and some crews were still on the site of the fire well into the evening.

Many reported the acrid smell of the fire and residents in the area were advised to keep their windows and doors closed.

Spread to neighbouring hotel
The fire is reported to have begun in the ground floor space between the Tarvic 2 Hotel and the neighbouring St Moritz Hotel, to which it also rapidly spread.

Firefighters worked hard to fight the fire and reportedly rescued much of the hotel residents’ luggage.

All staff and customers at the hotels were accounted for and the Fire Service report that no-one was hurt.

Road closures
This morning (Monday) some surrounding roads have been closed.

Community spirit
Several appeals for clothes, toiletries etc for those who had been staying at the hotel and may have lost their belonging in the fire were launched on Facebook, with nearby hotels offering space for those evacuated.

In addition, many local businesses such as cafes, hotels and the pub all provided refreshments and offered their amenities for the emergency services.

Our thanks to the Sandown Hub Facebook Group for sharing these videos and images from the fire.

Investigation
A spokesperson for the Isle of Wight Fire and Rescue Service said:

“Two appliances from Newport Fire Station, including the aerial appliance, have returned to the scene this morning (Monday) to carry out site checks.

Our thoughts are with those affected.