Park of the Year Award for historic Ventnor Park

We’re big fans of this beautiful Victorian park so pleased to hear the hard work of all those who tend to it has been recognised. 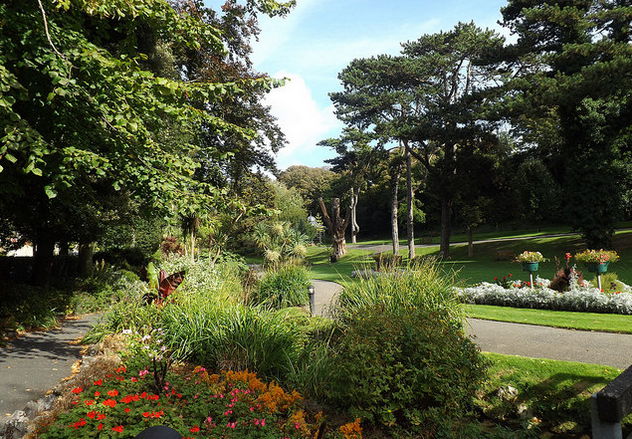 Historic Ventnor Park on the Isle of Wight has won the prestigious Park of the Year Award at the South and South East England in Bloom Awards.

All associated with its care should be congratulated
The awards at the event were presented by South and South East England in Bloom chairman, Peter Holman and Jim Buttress from the BBC’s The Big Allotment Challenge.

The judge’s summing up comments from his visit this year to Ventnor Park, included,

“All in all this beautiful park, with its coastal setting and Victorian ambience is worthy of its ongoing Gold award status and all those associated with its care and maintenance should be congratulated.”

“This is a magnificent achievement for Ventnor Park and the council’s parks in general. Ventnor Park was the only council maintained park entered into the competition this year, due to on-going budget constraints, which makes the award all the more special.

“It is great to see one of our parks being recognised in this way and is high praise indeed for the hard work that goes into making the park an award winning open space that visitors and residents alike can enjoy.”

“The council is delighted that Ventnor Park has been awarded this prestigious event and I would like to thank the people whose hard work keeps the park looking so good.

“In particular, I would like to thank our grounds maintenance contractor John O’Connor, who maintain the park and the support from Ventnor Putting Green, Ventnor Enhancement Fund and Ventnor Town Council, all of whom contribute to making the park the special place it is.”

Victorian splendour
Ventnor Park dates from the 19th century and covers an area of about seven acres.

It features landscaped grounds over a range of different levels, with mature trees, shrubs, herbaceous and bedding borders, a bandstand, a stream with gentle falls and water fowl, a putting green (under concession), and an adult outdoor exercise equipment area.

A beautiful park with a lot of work done by volunteers. You forgot to mention the budgies. A big well done and thank you.

A much deserved Award! Well done to all who continue to maintain and cherish our wonderful Park – you give us all a magical place to visit. Thank you.

Congratulations, this park is a jewel, and gives so many joy. Great to see it recognised…. Botanical Gardens next? :)

Huge credit must go to the staff who work so hard at maintaining this state-owned asset, well done.