Passionate speeches at protest for trans and non-binary rights

Around 35 people attended the peaceful protest in support of trans and non-binary rights, including the Isle of Wight MP, who said he was keen to hear the views of those affected by changes to the Gender Recognition Act 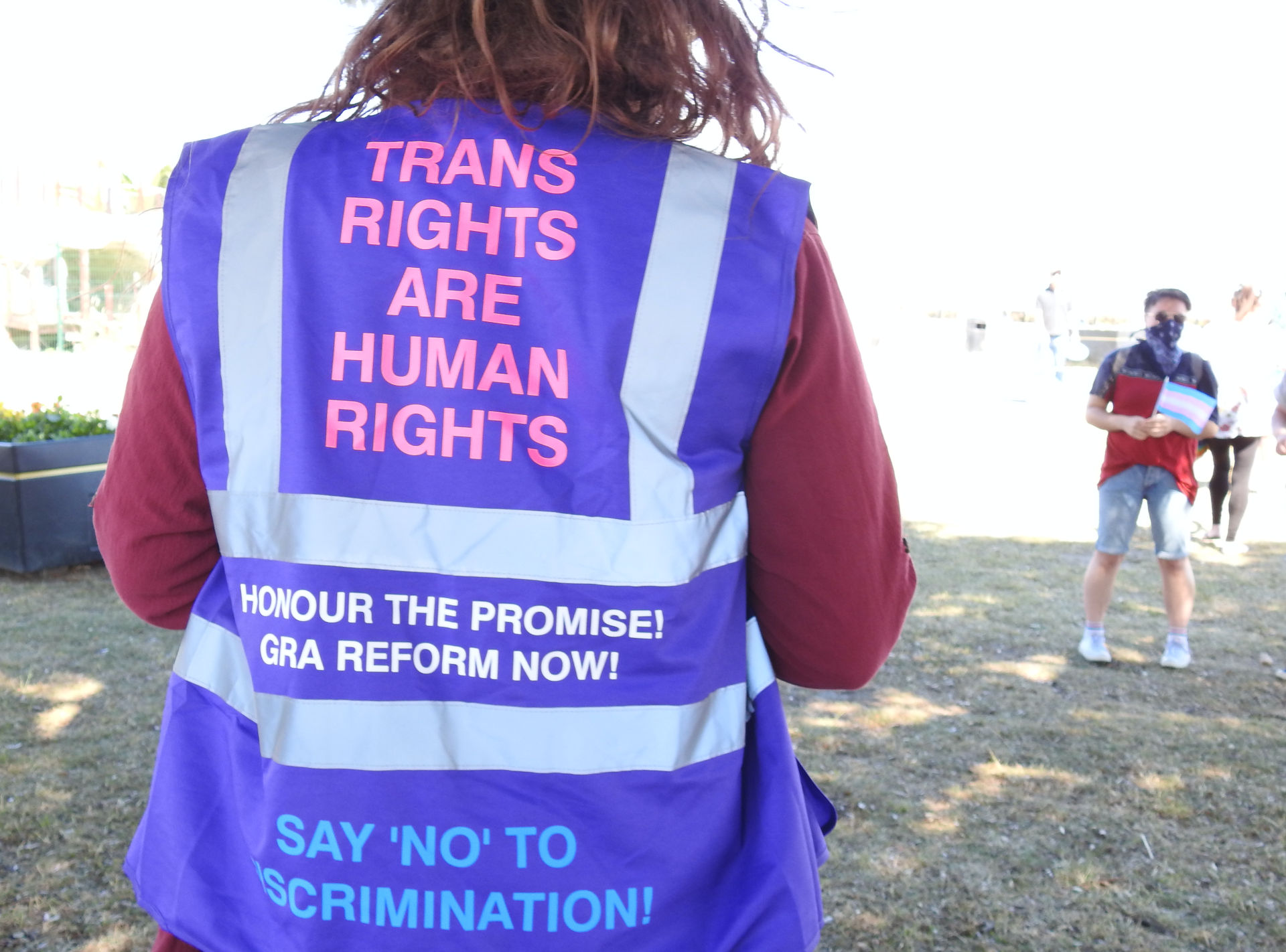 News shared by Yve White, in her own words. Ed

A protest in support of trans and non-binary rights in relation to the reforms of the Gender Recognition Act took place on Saturday 11 July 2020 in Ryde.

The protest was peaceful and attended by 35 people, who wore face coverings and respected social distancing.

Fighting for equality for all
The day started with a short speech from Yve White BEM, Equalities Officer UNISON, about how UNISON fully support all of the LGBT+ community and will continue to fight for equality for all. Following this a minute’s silence was held to remember the three men who lost their lives on 20 June in a terrorist attack in Reading.

The men were all from the LGBT+ community and Reading Pride have thanked the protest for their solidarity.

Yve White BEM was contacted by Cllr Nigel Phillips and by the MP’s parliamentary office and a meeting was arranged to take place with Bob Seely MP, Yve White and Sydney Cardew, a trans woman the next day.

He asked pertinent questions and listened to what Sydney had to say about her life experiences and why the reforms to the GRA are crucial to ensuring trans and non-binary people can lead their lives in their true identity; free from discrimination and abuse.

MP attended protest
The meeting was successful and the MP was invited to come along to the protest to speak to those most affected if the reforms do not go ahead.

Bob Seely MP arrived at the protest shortly after Sydney delivered her passionate speech (we will ensure he is sent a copy of the speech) and engaged with many of the people attending – again, listening to the lived experiences of his constituents; asking questions and taking an interest in what people had to say.

Bob Seely MP has asked Sydney Cardew for her views on the Bill and to comment about amendments being identified and being put forward. One of the issues most people seem to associate with trans people is around the use of public toilets and changing rooms.

Use of toilets
What most people don’t seem to realise is that the reforms to the GRA do not involve toilets. The law in relation to this is covered by the Equality Act 2010, where being transgender is a protected characteristic, which is not changing.

“I am very proud to have been part of this important event. Sydney and I were really pleased to have had the opportunity to meet with Bob Seely MP before the protest and we would like to thank him for attending the protest – it shows that he is serious about learning more about what might be a small number of his constituents, to ensure their voices are heard.

“Bob was very supportive of IW Pride and I feel sure he will do his best to support our trans and non-binary community given the knowledge and understanding he is actively seeking.”

newest oldest most voted
vicky
I would personally like to thank Mt Seely for attending Saturday’s event. My wife and I had the opportunity to have a very good conversation with him. He was very open minded and genuinely curious and interested to learn the realities of being trans. He has accepted an invitation to our home to see for himself that we are normal people and to have a frank and… Read more »
Vote Up13-2Vote Down
Jenny Smart

Good to see everyone masked up!

Wise move for Bob, given the demise of his predecessor upon the rocky sure of gay rights.

No disrespect intended towards the 35 LGBT that turned up but why doesn’t boring Bob sort out the ferries? I’ve just heard that a young family travelling to visit elderly relatives on the island in their tiny Fiat 500 got scammed for a £ 200 return ticket. Come on Sally, if Seely won’t get to grips with this kind of abuse perhaps OntheWight can?

You’ll be pleased to know the ferry prices is something that’s on our radar, but please can I remind you of the house rules to stay on topic of the article. Otherwise threads become flooded with comments totally unrelated to an article’s topic. Thank you.