Island Roads had previously agreed that these wildflowers in Sandown Bay would be left to thrive. Island Roads respond after they were hacked back at the weekend, for the second year in a row 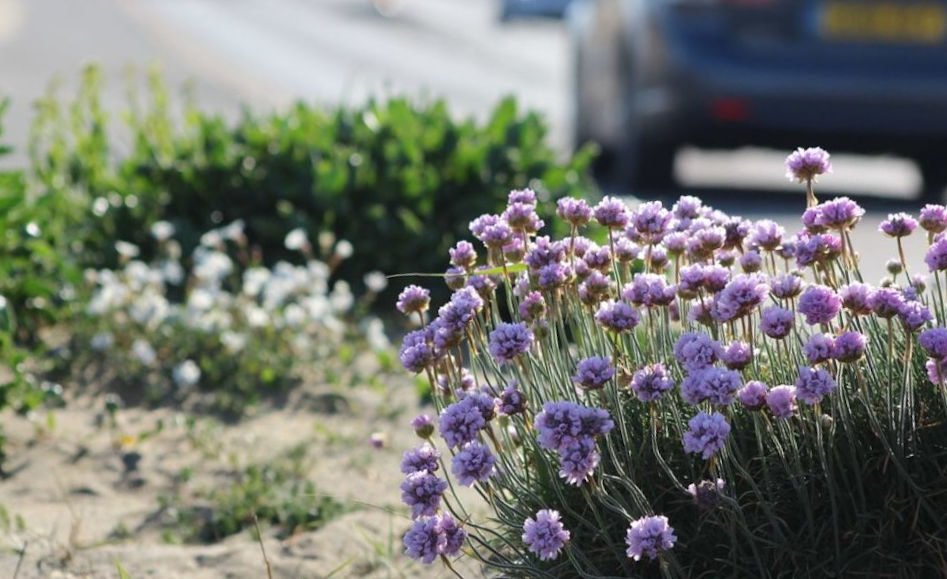 Swathes of beautiful pink Sea Thrift have been destroyed following a brutal strimming of the verges along Sandown seafront.

The flowers had been planted by Arc Consulting as part of the Lost Duver project in Sandown Bay.

What is The Lost Duver?
Inspired by ecology, the Lost Duver project seeks to rescue plants, build seed collections, and provide considered planting, delivering a rich resource for biodiversity that is appealing to wildlife, tourists and Isle of Wight residents.

It was borne from work with the Coastal Community Team as part of The Common Space.

The Common Space – A not-for-profit organisation – was set up to seek support for public realm projects in The Bay, and through the assistance of Dinosaur Isle, the Isle of Wight Council, the Bay CCT, Shanklin and Sandown Town Councils, the East Wight Landscape Partnership, Green Army volunteers, Artecology, Eccleston George, Tesco’s Bags of Help, the Coastal Gardener and many more, it’s become well-established.

Find out more about The Lost Duver on the Arc Consulting Website.

Wildflowers strimmed back to stumps
The verges from Brown’s Golf Course up to the bus stop by the Zoo have been strimmed with seemingly no care or attention given to the purposely-planted wildflowers.

When the same thing happened last year, Ian Boyd of Arc Consulting engaged with Island Roads and it was agreed these flowers would not be touched during future strimming.

Ian even sent a map and a photo of the plant to avoid any confusion, but on Saturday morning it was strimmed again, wildflowers included.

“There’s plenty of Lost Duver left so they’ve not done any terminal damage, and it will grow back. But it’s just this constant need to nudge and plead and remind that’s a bit wearing to be honest.

“No-one’s asking for the network to be managed like a nature reserve, but some sort of better balance is required.”

Island Roads: “Extremely disappointed and frustrated”
News OnTheWight got in touch with Island Roads to ask whether they were responsible for strimming the area. Their spokesperson told us,

“Island Roads is also extremely disappointed and frustrated this cutting has taken place. We apologise to the Sandown community and, in particular, those directly responsible for the wilding project.

“We had previously agreed with the project that the flowers would not be touched. This information was given to our contractors but unfortunately the instruction was not followed. We have spoken to the contractor again this morning to register our disappointment.”

Offer of assistance with future planting
The spokesperson went on to add,

“Island Roads will be writing to the project to formally offer our apologies and to see if there is anything we can do to assist them in any future planting.”

Boyd: Why does this keep happening?
Frustrated by the repeat strimming of last year, Ian added,

“Even the clumps hiding behind the wooden posts have been hunted down and obliterated. It might flower again this year, but you have to assume it’ll be cut down again, certainly before seeding, and that’s really the point of the Lost Duver – lots of seed.

“You have to ask yourself why this keeps happening. In the end there’s only one answer possible – that it’s just not an important enough matter to register in the Island Roads machine. All that matters is that the contract and its specification persists, and the flow of money that circulates around it remains unperturbed.”

Where to find the wildflowers
If you haven’t been along Culver Parade recently, Ian explains where to see some of the remaining wildflowers.

“There’s the pond field on the Willow Walk, at the back of the Pluto Pavilion, the little roadside dune between Dinosaur Isle and Sandham Gardens, the Seedbank by the beach cottages and there’s some of it in the amazing and tireless work of the Sandown (and Shanklin) Green Towns Volunteers.

“The idea was to get a series of ‘homebases’ established from where these flowers could naturally spread, And it’s working. You can now see Thrift, Sea Campion, Vipers Bugloss, Sea Holly, Yellow Horned Poppy and more, right in the town and along its Esplanade.”

Find out more by visiting the Arc Consulting Website.

newest oldest most voted
Tamara
Thanks to Ian and his team of eco-creatives, this is a wonderful and diverse display of wild flowers that brighten up the seafront – such careless vandalism to strim them. But it’s not just here: along the cliff path to the west of Ventnor, near the entrance to the park, the gardeners have strimmed right up a bank where bank voles live. The strimming is ruthless, over… Read more »
Vote Up510Vote Down
Steve Goodman
Sadly, “such careless vandalism” by our “we know best (despite all the evidence to the contrary)” servants/power holders is one big part of our local, national, and global environmental predicament. I see that this OTW report is one filed under “Yaverland”; on p.9 of that archive is a letter I wrote in 2011 about a tree killed, without penalty, by council contractors being paid to look after… Read more »
Vote Up60Vote Down
Guy Eades

Yes it is disappointing that Island Roads fail again to get the message about the environment that the IoW Biosphere celebrates. They need to train their staff/contractors. I would also like them to learn how to pollard a Street tree properly so they grow attractively into a mature shape rather than the biennial slashing.

The contractors should have a penalty deducted from their charges.

When you employ brain dead contractors this is what you get.

On the one hand, ruthless strimming, on the other cliff paths like jungles we can no longer penetrate. If you’re up for a challenge, try walking from Orchard Bay to Woody Bay, St Lawrence. But make sure you’re kitted out with jungle PPE.

Vote Up22-1Vote Down
Rowan
In the long term I reckon the only way to prevent this mindless vandalism is to end the privatisation of our public services. Handing over a contract to a single contractor for a quarter of a century is a stupid thing to do. The national government back in the 80s cut funding to local government, and forced them to hand over control to private companies to do… Read more »
Vote Up22-2Vote Down
choccofrolik

Well said, Rowan, and how true. I blame the Thatcher Government for all this ghastly privatisation. Where I used to live (on the Island), the local Council workers were proud of their “patch”, and kept everything beautifully up together. Now – it’s just get each job done as quickly as possible, and move on.

Guess that’s the difference between ‘Service’ and ‘business’ with profits taking priority over anything else.

Vote Up130Vote Down
6iraffe5loth
So first Ventnor flowers then these? :( I understand Ventnor at least – needing to preserve the underlying structure of a precarious situation… this is just someone destructively removing everything that goes near their precious paving work I guess. Probably just following orders with no instructions to avoid any specific areas. Isn’t it against the law to damage protected species? Could Island roads be taken to court… Read more »
Vote Up18-2Vote Down
Rowan
The lovely species involved, like thrift, are not so rare that they’re specifically named in any legislation. (And even then mostly the only protection for rare plants is against uprooting.) But how else do plants that were once common and familiar to everybody become rare, if not by people destroying or damaging them because of contempt (in the big cases of destruction to build yet more airport… Read more »
Vote Up100Vote Down
Rowan

Helpful guide to the law covering wildlife and countryside. Including what isn’t protected.

The species protected by Schedule 8 of the Wildlife and Countryside Act 1981:
https://naturenet.net/law/sched8.html
It’s quite a short list, relative to the hundreds of native plants in Britain.

Would these be the same blokes,3 of them in 3 vans,who turned up last Saturday morning to hack back one palm tree opposite the library?

Do you really think that the contractors will stop to read signs?

Fire the contractor and do not employ again.

If you haven’t already, please sign the Plantlife petition to protect our species-rich road verges:
https://plantlife.love-wildflowers.org.uk/roadvergecampaign

Please join fabulous charity Plantlife and help them speak up across the country for our wild plants!

So, comms from IR Simply didn’t work. Financial penalty in order. Works every time. If IR are truthful when they Say they told the sub contractor, good. They’ve nothing to fear.

Makes the dispute they need to have less cloudy.