Organisers of the Isle of Arts festival say the artistic success of the event was not matched by a financial one and the annual event will not return to Ventnor in 2016. 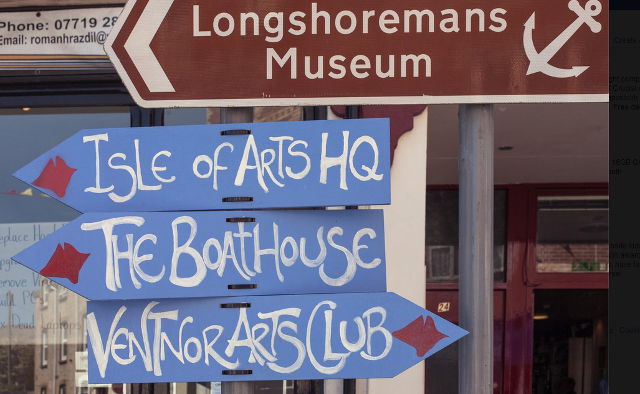 Launched in 2011 with the fantastic Rich Hall as the headline opening act and followed in subsequent years with the likes of Sandi Toksvig, Alan Davies, Phill Jupitus and more, it’s incredibly sad to hear the Isle of Arts Festival will not be returning to Ventnor in 2016.

Not financially viable
A huge amount of energy (and money) was ploughed into the festival each year by the founders and volunteers. OnTheWight were proud to be involved as a sponsor for the event, helping promote the Festival across the Island and beyond.

The cost of having to host the event in a marquee for four years, as the nearby Ventnor Winter Gardens sat empty, has added to the financial impact say the organisers.

“We couldn’t get it to break even, even though people loved the events that we put on.”

One-off events
The organisers are not hanging up their event hats completely though. As with the recent Arthur Smith event they hope to return with one-off events. Philip continued,

“We might occasionally put on one-off events, but not the full event every year.”

Message from the organisers
The following message was posted to the Festival’s Website this week.

It is with great regret that we have to inform you that there will be no future Isle of Arts Festivals. We have greatly enjoyed putting on the Festival these last five years, watching it grow and be enthusiastically received by our audiences. We would also like to acknowledge the invaluable support of our sponsors, advertisers, Festival Friends, local businesses and individuals and of course our wonderful volunteers.

Unfortunately the artistic success of the event was not matched by a financial one; four years of having to house our main events in a marquee (with all its associated costs) and the fact that we wanted to keep ticket prices as low as possible to make the Festival inclusive to all, meant that the organisers have had to make good a substantial shortfall each year.

Several requests for support from the Arts Council proved unsuccessful and in the current economic climate commercial sponsorship is ever harder to secure, which unfortunately leads us to conclude that it would not be prudent to start planning another Festival for 2016.

We would like to thank everyone for the support shown to Isle of Arts during the last five years.

The Isle of Arts team

This really is bad news for the islands arts scene…perhaps a sponsor can be found one day, so it can return?

Terribly sad, this was terrific for the Island, surely a sponsor can be found, although the Old Gaffers recently claimed lack of sponsorship as the cause of their problems too. Come on business, couldn’t you try a little hadder to help?

Difficult to see how a major event like this would work in future in a town without a bank! Very sad to a town that has been so much “on the up”…

Are HSBC planning to close as well then?

Vote Up00Vote Down
Rowan
Well done the Isle of Arts team, both paid and volunteers, for all the hard work over the years to put on such fabulous festivals. This is terribly sad news. But not surprising. What else do we expect after 24% of voters chose a political party who took over 100% of government and then cut off funding to people on low wages, disabled people, local government, health,… Read more »
Vote Up00Vote Down
Mr Einsteins Ghost

I see in today’s County Press online edition, that The Ventnor Winter Gardens have offered £5000 towards saving this fantastic event, but we need other businesses/individuals to come forward…fingers crossed!