Campaign continues to find out what happened to Damien Nettles

Our thoughts today, on the 14th anniversary of his disappearance, are with the family and friends of Damien Nettles. 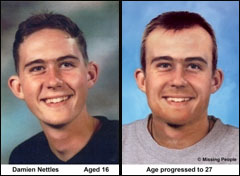 The 16 year old from Gurnard went missing on 2 November 1996 after a night out with friends in Cowes and has not been seen or heard of since.

His family and friends, who’ve spent the last fourteen years trying to make sense of Damien’s disappearance, are this year running a billboard campaign in Newport in the hope that it will jog people’s memories.

Never too late to provide information
If you think that it was too long ago for people to remember anything and come forward, the police tell us that they’ve had 20 pieces of information since the 12th anniversary back in 2008, proving it’s never too late.

Detective Inspector Nick Heelan of Hampshire Constabulary’s Major Crime Department said, “There has been an intermittent flow of information since 1996, and people have come forward years after Damien’s disappearance, suggesting there is still the possibility that members of the community have knowledge that could take the investigation forward.”

The background
On 2 November 1996, Damien was finishing a night out in Cowes with friends by visiting Yorkie’s fish and chip shop on the High Street.

CCTV footage from the shop at 11.45pm showed Damien talking to several male customers. Three of those men have since been identified, but the others remain unknown.

In relation to the CCTV footage, the Damien Nettles’ Website says, “He was surrounded by a group of 5/6 men. Only three of these men have been identified. Two were army officers who were in Cowes for training in sailing. The other, possibly a local drug dealer, who has since passed away, who was not identified until after his death.”

Questions over police action
Damien’s family and friends have continued to campaign year after year for any information in relation to his disappearance.

During this time some questions have been raised about how the Police have handled certain elements of the case.

We put a number of questions to the police last week,

We’ll let you know once we receive a reply.

Ongoing investigation
The police tell us that on this 14th anniversary of Damien’s disappearance, they have four dedicated officers from Hampshire Constabulary’s Major Crime Department working on possible lines of enquiry.

One tiny piece of information may be the key to Damien’s disappearance so do please get in touch with them if you know anything.

The charity Missing People (formerly the National Missing Persons Helpline) can be contacted in confidence on Freefone 0500 700 700.

Information can be given anonymously by phoning the independent Crimestoppers charity on 0800 555 111. No one will know you called.

Thank you for this Report its now posted on Damiens Group Page Wall…
http://www.facebook.com/home.php?#!/group.php?gid=5825829842