Undercliff Drive consultation found 58 per cent in favour of reinstatement

The Isle of Wight council say the cost to re-instate the road is estimated to be between £1 million and £2 million, dependent on whether the scheme allowed one or two-way traffic and if the new route was restricted to vehicles below a certain weight 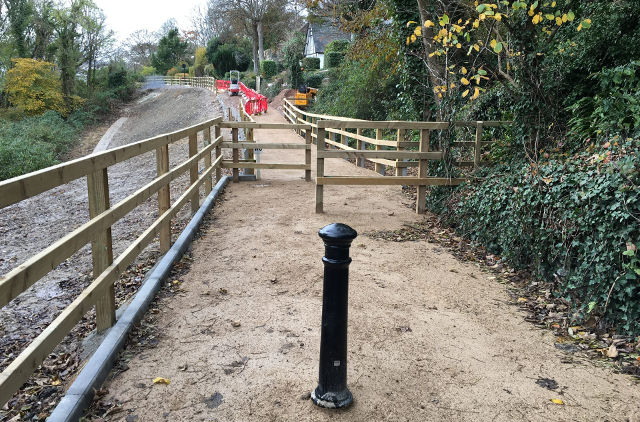 A consultation on the future of Undercliff Drive has come out in favour of re-opening the road to through traffic.

The council carried out a six-week consultation over the summer seeking the views of residents, businesses and visitors on possible plans to re-open the road which suffered significant landslips in 2014.

58 per cent agreed to reinstatement
Around 770 surveys were completed either online or in hard copy form with 58 per cent of respondents agreeing or strongly agreeing to the reinstatement of the road to vehicular traffic.

This compared to 40 per cent of people who strongly disagreed or disagreed with the reinstatement proposals. The remainder neither agreed nor disagreed.

63 per cent from Ventnor
Almost two thirds (63 per cent) of people who gave a PO38 Ventnor postcode – the area in which the Undercliff is located — either agreed or strongly agreed with the proposal.

“The Undercliff is a complex issue that doesn’t lend itself to a quick solution.

“Following the outcome of this survey, we have asked officers to source possible funding for a range of investigative studies which we need before we can consider an appropriate way forward.

“However, in the meantime, I have asked officers to consider a potential package of road safety improvements for Niton to address the influx in traffic the village has experienced since the road closure.

“This includes measures Niton Parish Council discussed with me earlier in the year.”

“Firstly, can I thank everybody who took the time to complete the survey on this very important issue that not only impacts on Niton, but the whole Island.

“We fully appreciate that some local residents do have legitimate concerns of which we will be mindful.

“My view is it cannot be beyond our engineering capability to find a way to remedy a landslip of less than 100 metres.

“We have houses and businesses spread along the length of the Undercliff but the economic damage of the closure has spread well beyond these areas with businesses as far away as the West Wight also noticing a drop in trade and tourism following the closure.”

Land-locked homes
Undercliff Drive was affected by major ground movement during the very wet winter of 2013/14. The landslides led to the loss of the road at two locations, land-locking nine homes.

Currently, the cost to reinstate the road is estimated to be between £1 million and £2 million

Those against the proposals cited the cost of the work, the risk of future landslips and the ecological impacts among their concerns.

£200,000 for design
The cost of producing a design to re-open the road to traffic is estimated to be around £200,000, and would involve topographic surveys, ground investigation boreholes, a stability analysis and an environmental impact assessment.

Currently, the cost to reinstate the road is estimated to be between £1 million and £2 million, dependent on whether a scheme allows one or two-way traffic and if the new route was restricted to vehicles below a certain weight.

The council has acknowledged that ground movement will continue in the future and any investment in the area will need to take this into account.

Above new shared on the Isle of Wight council’s Website, in their own words. Ed

Ian Ward claims Niton has seen an “influx of traffic since the road closure” but Dave Stewart says “businesses as far away as the West Wight also noticing a drop in trade and tourism following the closure”. They can’t both be right.
If the road gets reopened, no doubt there’ll be an influx of traffic along the road itself.

Vote Up23-7Vote Down
Benny C
Exactly. The survey wad convenient to Daves personal agenda, it didn’t explain the outcomes completely, nor ask smart enough questions to get a meaningful long term answer. Not enough about environmental impact, property values, amenity value, etc and, worse, nothing about respondents ages. If you took this to Ryde school or indeed any decent education establishment I’d bet quite a lot of money that our next generation… Read more »
Vote Up14-7Vote Down
bigj

Benny C, you forgot to mention the fact that the current re-routed traffic, now have to drive past DS’s house.
There is absolutely no reason to believe that traffic will decrease.
Currently traffic is only being rerouted, along a superior road that could benefit long term, from improvement, if only the funds were available?
£2 million for a temporary fix makes as much business sense as the Floaty Fiasco.

Everywhere has an influx of traffic due to lack of investment in road infrastructure and too many cars on the road. The Whitwell road is more scenic, light and has spectacular views that’s where tourists need to be directed. Whilst tourism is important so are the people who live here but are clearly not important to Dave Stewart and his inconsiderate cabinet.

Yes but – that means Instead of coming from Undercliff Drive it comes from Whitwell. Still uses the one way system? Doh. So businesses on Niton have a chance to thrive. This is all uncommercial baloney. Good businesses who understand How to connect to customers and offer the right products thrive almost anywhere.

Vote Up1-1Vote Down
JossS
Here we go again any potential re-opening of this road where the land slip issues will NEVER go away (which is acknowledged by our inept empty-headed Councillors) will be just another waste of public money. To say any re-opening will benefit tourists is just absurd as the dense vegetation obscures all views, it is dark and dismal. As for businesses I’d like to know where they are… Read more »
Vote Up22-13Vote Down
Spartacus
This simply just does not go away and is being expedited by Councillor Dave Stewart and his cronies out of self interest. The survey is a farce like most surveys which never truly represents the majority and is meaningless. Business has not suffered and tourism has not been affected, in fact tourists welcome the Under cliff Drive being left as it is, fact. Any suffering clearly Is… Read more »
Vote Up20-11Vote Down
Benny C
My issue is that the survey was so inadequate in terms of wider considerations we actually don’t know the quantitive answers to these questions even now. I suspect come the planning application there is some serious legal firepower on the Undercliff who see the bigger picture and are lining up to challenge this. An action group should form and bring in a good planning consultant. The island… Read more »
Vote Up9-6Vote Down
JossS

Yes absolutely agree Action Group against re-opening should definitely be formed forthwith. Are you going to do it? Watch this space!

We collectively need to take this issue seriously, use the law to challenge this stupidity led by Dave Stewart and organise an action plan, group and a campaign and need a public enquiry. Let’s organise now!

Vote Up8-9Vote Down
Spartacus
How many times do people want to be reminded that the Undercliff is an area of land movement and will continue to do so. Don’t sit on the fence Benny C let’s cut to the chase, a reality check is needed for Island residents. We cannot let Dave Stewart off the hook, he is using a meaningless survey which doesn’t even represent 1% of the population to… Read more »
Vote Up13-9Vote Down
Colin
I can understand some businesses have been affected, mainly those within the area. I can understand that maybe coaches don’t call where they used to because of the general road system not always being coach friendly, so Ventnor could suffer a drop in business. I know Whitwell has seen a dramatic increase in traffic, but as the only road, there isn’t an alternative. The council could improve… Read more »
Vote Up9-4Vote Down
Spartacus

What businesses its all fabrication and propaganda it’s austerity that’s the problem. There’s a dramatic increase in traffic everywhere and Whitwell is a great access road and a beautiful scenic route as well so what’s the issue, there is none.

Vote Up8-5Vote Down
davimel
All academic IMO… Tory Council, 58% want change, not a high enough percentage for Tories to take seriously, based upon recent affairs on the big island. As for a reinstatement, how can anyone know for sure just where the road is eventually going to settle.. everytime it rained, or we had drought there would be countless ‘experts’ decrying doom and gloom and millions in ‘consultations’ to claim… Read more »
Vote Up7-4Vote Down
bones

Whitwell road is not the only other route. Have you tried driving up St Lawrence Shute recently ?