The Leader of the Isle of Wight council reiterated their intention to reopen Undercliff Drive subject to the outcome of a feasibility study. 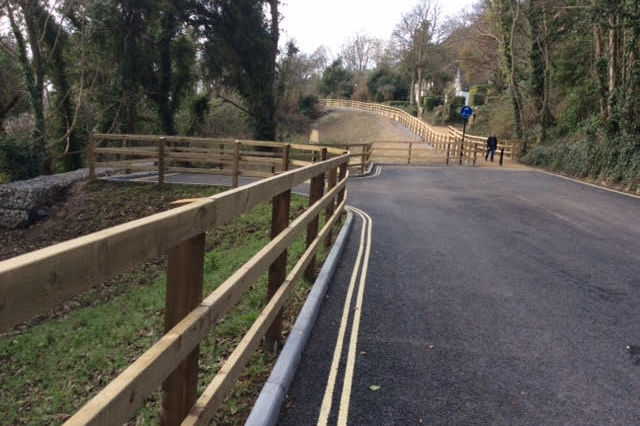 Back in February 2017, Leader of the Isle of Wight council, Cllr Dave Stewart, said the Conservatives would get Undercliff Drive open again.

He revealed that he’d commissioned a feasibility study by Professor Bruce Denness on solutions to reopen the road to through traffic. In June this year, at a meeting in Niton, Cllr Stewart gave local residents an update on the key findings of an Impact Study carried out by Bournemouth University.

Another feasibility study
Fast forward to October 2018 and an item about a feasibility study for “Niton Undercliff” was tabled for discussion at this week’s Cabinet meeting, but at last night’s Scrutiny Committee (catch up here), the Chairman, Cllr Andrew Garratt, asked is there was any explanation to to why the item had dropped off the Cabinet list.

“It is the intention of this administration to reopen Undercliff Drive, subject to a feasibility study.

“Undercliff Drive has two aspects to it at this point in time. One is the specific work needed to reinstate the road and underpinning that, is work needed to deal with the pressure of water that is causing the landslip.

“What we’re currently doing is exploring the cost of the feasibility study which is from my point of view the process by which we can reach a decision and we are doing some soft testing on that at the moment, engaged with a number stakeholders and on the Forward Plan you will see the report is up for Thursday [Cannot find reference of the report on the latest Forward Plan. Ed] and I shall be clarifying where we are on Thursday.”

The Cabinet will be meeting at the Ventnor Winter Gardens on Thursday 11th October at 5pm.

Article edit
Note about meeting in January corrected to June.

newest oldest most voted
ontheleft
I’m pleased to announce my intentions regarding Ventnor Haven. I will take ownership off the council and will immediately make significant investments. I will have new arms built further out to sea with a lock system. These will control the ingress of seaweed and will also, by maintaining water depth, allow the harbour to cater for international fin keel racing yachts. Once Ventnor is established as a… Read more »
Vote Up18-1Vote Down
chris1
Colin, I think you will find local South Wighters all want it open. It is an A road after all. Without it the area slowly slips backwards and businesses from Ventnor to Chale have been badly affected by it, and jobs lost. Bruce Denness, whose plan fixed the Military Road at Brook, has a plan for the Undercliff and the beauty of it is is that it… Read more »
Vote Up12-1Vote Down
Colin
The signage remains poor in the area too. At the Niton end there is one sign showing a dead end that is just visible, but as has been said before, there needs to be better signs especially for those not familiar with the roads in the area. How about “Through road closed at St. Lawrence, local traffic only”. And whilst I am here, the signs for the… Read more »
Vote Up110Vote Down
laurentian

Couldn’t have put it better myself!

That “Road ahead closed” sign may refer to the road you are on, or some little side road . . .

Vote Up80Vote Down
Colin
We must all look forward to thursday where the ramblings of the leader will be clarified. I wonder how many people actually want the road re-opened other than to stop the excess use of the shute which seems to get busy or to spread the traffic currently going through Whitwell. Me, I’d leave it as it is and promote it as part of the cycle route. But… Read more »
Vote Up14-8Vote Down
laurentian
As Colin says there are arguments for and against. The shute, now open again after repairs to the bridge (damaged by some over-large vehicle trying to use it as a short cut) can be a major source of amusement – picture 3 going up meeting 5 coming down at said bridge, and none of them apparently knowing how to reverse! The bollards erected by the nearest inhabitant… Read more »
Vote Up24-5Vote Down
bones
Our leader is very good at issuing promises that are never fulfilled so I don’t think we have to fret about a new Road. As for St Lawrence Shute and Seven Sisters Road …we have been promised 20mph speed limits apparently ‘no problem’. ditto better signage,meetings ad infinitum .None has come to pass. The reason why the Shute has been closed recently is because a tourist coach… Read more »
Vote Up14-8Vote Down