Islanders all set for the 2015 Southampton Boat Show

There’ll be lots to see and do at the Southampton Boat Show next week. Suzanne and Alan provide their annual round-up of what’s on offer. 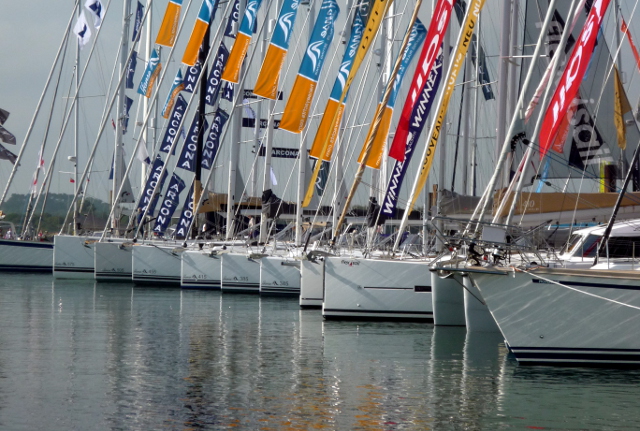 Thanks to Suzanne and Alan for this annual round-up of what you can see at the Southampton Boat Show. Ed

This year’s Southampton Boat Show, to be held in Mayflower Park (11-20 September), will have one of Europe’s largest purpose built marinas with over 2km of pontoons displaying more than 300 boats.

Also at the show will be some of the world’s most prestigious exhibitors and brands, hosting global, European and UK launches of yachts, RIBs, motor and day boats.

In addition, the Marina holds many exciting feature boats including ‘The Earl of Pembroke’ star of over a dozen films or TV shows including: Alice in Wonderland, Hornblower, Treasure Island, A Respectable Trade, Moll Flanders, Frenchman´s Creek and The Count of Monte-Cristo.

Some of the Show’s most popular attractions including free activities will be found in the Marina such as Try-A-Boat and Get Afloat.

Innovative Wetwheels
For disabled visitors who want to get on the water, once again, Wetwheels which was built on the Island will be at the show. This is a fully wheelchair accessible, 9m Cheetah catamaran powered by two of Suzuki’s flagship V6 300hp outboard engines.

It is equipped with the latest, state-of-the-art marine electronics provided by Raymarine and access is via a side-opening door and ramp onto her large open deck. This craft is MCA coded (category 2) to take up to 10 passengers and is designed to take 3 wheelchairs in tie-down positions on the deck for maximum safety.

If you’re interested in going out on Wetwheels, please visit the Try-A-Boat Stand.

Following on from AAM Cowes Week two show stoppers which were at Cowes will also be in Southampton – The Red Arrows and the Big Wheel (sponsored at this event by Honda instead of Red Funnel).

For 2015, the Red Arrows team’s 51st season, the Squadron is commanded by Wing Commander Martin Higgins and led by a new Red 1, Squadron Leader David Montenegro. The team’s BAE Systems Hawk T1 jets have a new look for 2015 – a Union flag-inspired tailfin design that emphasises the team’s role as an ambassador for the UK and its industry. Their display will be on Saturday 12th September.

Islanders abroad
A number of Island companies are exhibiting at the show including BVD Marine which is based in Bowcombe and PSP and Hudson Wight both based in Cowes. Hudson Wight’s ULTRA RACER is the top model in SECUMAR’s 150N (170N actual buoyancy) Ultra series lifejackets and is exclusively distributed by Hudson Wight in the UK. With its unique front ‘click buckle’ it is one of the very few lifejackets that can be done up or undone single handedly or released once inflated.

Hudson Wight are not only about selling yachting gear, with a short time to go to the start of the Mini-Transat yacht race they are the main sponsor for Lizzy Foreman who is setting off in the race from Douarnenez, France),(with a stopover in Lanzarote) to Guadeloupe. Lizzy, who took part in the JPMAM RTI Race, is also sponsored by Red Funnel.