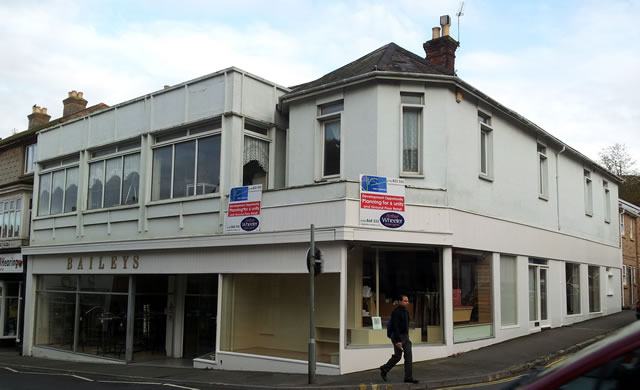 Bailey’s in Shanklin had its last trading day on Saturday just past.

They’ve had quite a run there being as they originally opened 141 years ago, when the great-grandfather of the current Mr Bailey, John Bailey, opened the establishment’s doors in 1871. Over the years it expanded to include other parts of the corner-block site.

Given how long the shop had been part of Island life, we wanted to mark the closing.

Sandown and Cowes remaining open
We had a brief chat with the current Mr Bailey today as he was clearing up the left stock of the old building, “We’ve moved around the over the years – we used to have premises in Ventnor, Newport and even Southsea”, he told On The Wight, “Now we’re condensing down to two shops – Sandown and Cowes.”

On The Wight got in touch with Richard Priest – well-known for his videos about Shanklin’s history – who said, “It now leaves Abell’s as town’s oldest shop, and notably in WWII was opposite Shanklin United Reformed Church when the clock tower was struck by German bomb.”

Richard is also going to have a dig around in his collection of some historic photos of the shop.

The plans are to alter the site, but a shop unit will be available from rent and the rest of the premises will be converted into six living units.

Old postcard
Update: Many thanks to Richard Priest, who, true to his word, has pulled this postcard out of his archive of Shanklin memorabilia. Click on Baileys postcard to see the large version. Click on the current Bailey’s photo to see the large version.

how sad.Janet Witchy White
Awww they’ve been there forever :(Anni Ruecroft
It is a shame my mrs buys her pants thereBrent Croxford
Oh dear.where will i get my oil cloth for my kitchen table now?. :(Julie Wyatt
It’s very sad!! :0( xHayley Louise Smith
not a likeLinda H Lochlan
very sad to see it goJacqueline Davies
Very sad that such a great shop has to close :(Hilary Nelson
a peice of shanklin history going very sad.Rodney Worzel Walmsley
My auntie worked there for years !Tracy Vaughan
That means yet another charity shop waiting in the wings!!Nigel Foster
Where is my Mum going to buy her pants now?Kim Gardiner
Hate to say it but if you don’t use it you lose it ….Louise Mackenzie
that’s sad news.Irene Craig