Some idiot has painted over Banksy’s work

Yesterday we brought you news of the Banksy No Future artwork discovered in Southampton. 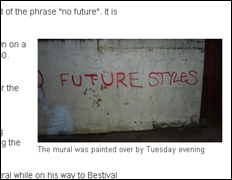 News of the artwork being discovered was also featured in the Southern Daily Echo yesterday and on last night’s South Today programme, where they revealed the location of the work.

It’s with heavy heart that we report this morning that the work has been painted over, apparently not by the council, but someone with a paintbrush and a spray can.

It’s also been covered by the BBC and the Southern Daily Echo. 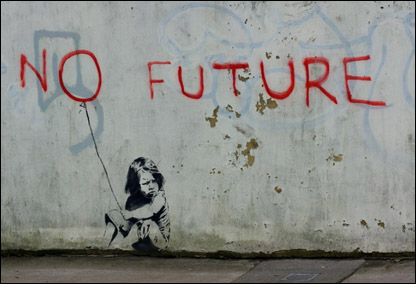 14 Comments on "Banksy’s ‘No Future’ White-Washed"

Vote Up00Vote Down
isleofvibe
I really wish people would just leave Banksy alone. He paints some of the most current, topical artwork and always with a sense of satire. It astounds me that councils will paint over his work but leave masses of bad graffiti and tags everywhere. Having said that some of the graff around Shoreditch is incredible. At least most Banksys I have found in London are left in… Read more »
Vote Up00Vote Down
romeantique

Graffiti artist often cover the work of others,its par for the course. Banksy knows it is always going to be temporary in public, perhaps that’s why he does it, for publicity. Anyway he could easily redo a hundred times over as it was only a stencil after all.

Vote Up00Vote Down
rjc
Why do you put a silly price on this art/vandalism. The property it was painted on belonged to somebody, if it was mine I would paint over it as some other little scrote will think he can add his scrawl as well. How arrogant of Banksy to leave his daubings on other peoples property and think we should be grateful. Idolising a vandal will only encourage others… Read more »
Vote Up00Vote Down
Steephill Jack

It’s a marketing ploy: no such thing as bad publicity. If it was stuck in a gallery very few people would get to see it, or care about it.
I like it.

Vote Up00Vote Down
heather jacobs-blachford
i saw a man he was scary he juped up and down its a banksy. twise. this man staer at my grandaughter nicola jacobs of bittern manner school.as she tryed to see the man making a mess we were stuk in trafic for 10 minits he had chalks on the ground but the smell of paint was over powering.that friday night. ibought some clother i have the… Read more »
Vote Up00Vote Down
watchdog

A fine piece of writing – reminds me of Chaucer in the original Old English.

Vote Up00Vote Down
romantique
Really this defacement has a lot more to do with than Banksy does any more. Banksys art can hardly be seen as anti-establishment as he is part of the art establishment himself. He can stencil a rat on an old piece of metal and it sells for thousands of pounds and he would have Councils queueing up pleading with him to deface public property. Which kinda diminishes… Read more »
Vote Up00Vote Down
romantique

“Really this defacement has a lot more to do with GRAFFITI than Banksy does any more.”

Just in case you thought the Chaucer effect was spreading watchdog.
Incidentally my dog regularly sprays on my garden wall, but is it art?

If it was my wall I would have painted it out straight away. Its just a spray using a stencil after all. Rubbish, like most “art” these days.

Just because it might be this Banksy (or a copy-cat) does not mean its not vandalism.

Have to say I liked it.

Vote Up00Vote Down
A Non

I too like Banksy’s work and considered a trip to Bristol to see the exhibition of his work BUT I agree with some of the sentiments on here. At the end of the day, he’s a vandal. If he painted on the side of my house I’d be very cross, unless it increased the value of course! Hmm, there’s a thought, wonder if I could fake one…..