Binnel Studios and The Bunker Gallery invite you to their 2020 Summer Exhibition: Unlocked

The August bank holiday weekend brings with it a chance to meet nine of the most talented and highly-accomplished artists on the Isle of Wight, in this joint exhibition between Binnel Studios and their nearby neighbour, The Bunker Gallery 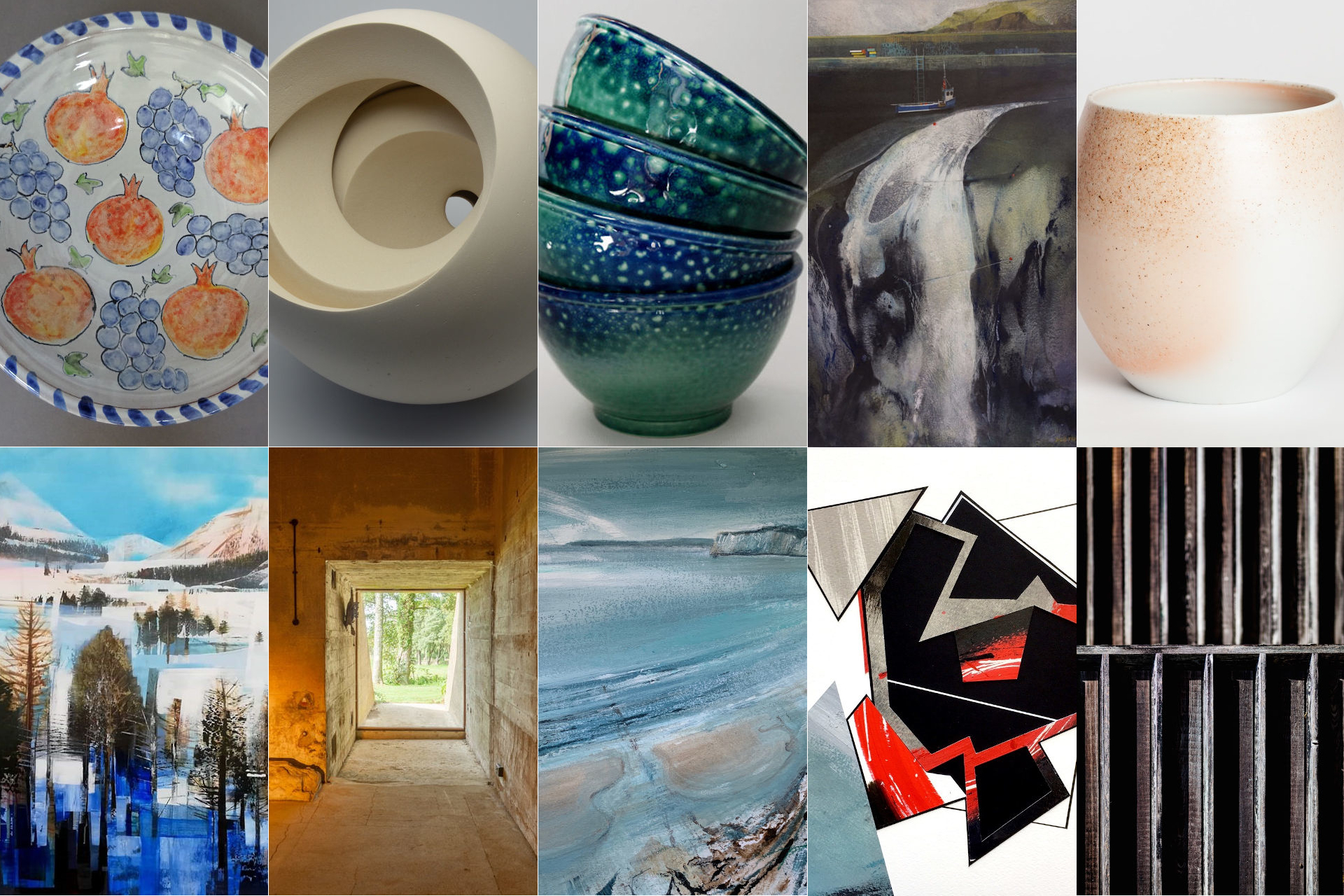 There aren’t many places that can offer an ‘effortless cool’, but Binnel Studios, now fully established at the former site of Isle of Wight Studio Glass in St Lawrence, and The Bunker Gallery, and a WWII radar bunker, do just that.

This summer, Binnel Studios and The Bunker Gallery come together for a joint exhibition, the Binnel + Bunker Summer Exhibition 2020, Unlocked. One event, two venues and nine artists.

The artists
If you’ve been lucky enough to visit Binnel Studios, or The Bunker Open Studios, you’ll know that the quality of work is impressive.

This year’s event is a great opportunity to see new work by the artists; Molly Attrill, Matthew Chambers, Jane Cox, David Firmstone, Sue Paraskeva, Amanda Wheeler and Celia Wilkinson, as well as Lisa Traxler and Lincoln Miles at The Bunker.

As you might expect when there are nine artists involved, a wide range of styles and mediums will be on show, appealing to a variety of tastes.

Molly Attrill
Molly Attrill’s pots are designed and made to give pleasure in everyday use at the table.

Inspired by Bernard Leach, Molly Attrill was apprenticed to his son Michael in North Devon before taking a three years full time specialist course in studio pottery at the West Surrey College of Art and Design, Farnham. She then worked for a number of years as a ‘journeyman’ potter in studios in France and Canada before setting up her own pottery in 1982 at Mersley Farm, Newchurch (now The Garlic Farm). In 2014 she moved to Binnel Studios. She also has a Post Graduate Diploma in Art History and Design from Winchester School of Art.

Molly works in earthenware as well as stoneware and porcelain. The inspiration for this bowl came from a 17th Century maiolica dish in The Fitzwilliam Museum, Cambridge.

Pomegranates and grapes are both symbols of fertility, making the design ideal as a marriage celebration gift.

Matthew Chambers
Award-winning ceramic sculptor Matthew Chambers began his ceramics career in 1993 as an apprentice potter, which eventually led to an education finishing at the Royal College of Art in London in 2004.

He has been working on the Island ever since then and has had his work represented by galleries in the UK, as well as internationally in Paris and New York.

His works have been purchased for several museum collections including The V&A London, National Museums Scotland, and The Sevres National Ceramics Museum in Paris.

He has also worked with Spanish fashion House, Loewe, who house a permanent display of his ceramics in their Rome boutique.

Jane Cox
Jane Cox is a Fellow and former Council member of the Craft Potters Association (CPA) and a Brother and Trustee of the Art Workers Guild (AWG). In January 2019 Jane took over Chairing the Outreach Committee of The Art Workers Guild coordinating a team running projects across various institutions such as the V&A, Courtauld Institute, Watts Gallery and Imperial College. This has been interesting and challenging and quite a different role of Guild Master.

As Chair she participates in the All Party Parliamentary Group on Craft (APPG) set up by The Heritage Crafts Association to raise awareness in Westminster about all aspects relevant to the Crafts including the importance and funding for Craft apprentices and examining current risks, threats and opportunities in the sector.

In addition she is co curating a major exhibition “The Art Of Making” with 40 brothers of the Art Workers Guild exhibiting and demonstrating their work as part of London Craft Week to be held In London May 2021.

This is an ambitious project and the first of its kind at the Guild where all floors of the Guilds superb Bloomsbury building will be involved – with talks, demonstrations and exhibitions and guided tours taking place throughout.

David’s landscapes and seascapes of the Isle of Wight and abroad are incredibly commanding and must be seen in person.

“All my work is concerned with landscape and seascape. I am fascinated by marks: the painters and those that humans make when they work the land. The spirits of artists and land workers past and present shape my view.

“I work on a large and small scale in oils, tempera and watercolour. I use tradition as my touchstone and modernism as my flight.”

Her ceramic works are rooted in traditional techniques, thrown forms made on the wheel, firing in real flame kilns, using natural wood ash deposits and the reduction flame to add unpredictable embellishments.

“The alteration of the vessel has long been part of my experimental practice, a gesture and expression, very much part of the process.”

A studio space with other artists at Binnel will give her many more opportunities to continue this development.

A welcome escape after lockdown.

Her work is forever evolving, but primarily she paints semi-abstract coastal seascapes using acrylics and watercolours.

Celia painted a series of paintings on her return from St Moritz in February. They are different landscapes to those she has painted before, but still very much in her own style.

“Lockdown has been an interesting time creatively. Confusion started to seep into my paintings as much as it was in our daily lives.

“Much of it I didn’t keep but have it as a photographic record of that period.”

It is beginning to flow again now and Celia, along with the other artists at Binnel Studios is looking forward to opening the doors once more in August.

The Bunker
The Bunker Gallery is sited in a converted WW2  Radar Bunker – it is also home to artist Lisa Traxler and designer Lincoln Miles.

The abandoned RAF bunker has been transformed into an avant-garde home, sculpture park and gallery. Annually an artist or creative group are invited to install a pop-up exhibition celebrating this unusual space.

“During the Second World War, more than 50 Chain Home early-warning radar stations were erected on Britain’s coast to keep the Luftwaffe at bay.

“The radar station at St Lawrence, on the south coast of the Isle of Wight, was built in 1941 and buried in the earth; it helped to detect V-1s, but was closed in 1947 and fell into ruin.

“This is our back story to the wonderful bunker that we are guardians of and the backdrop to our pop-up gallery over the August Bank Holiday.”

Lisa will be creating a new limited edition interior sculpture, unique to the ‘Unlocked’ Summer Exhibition 2020. All proceeds from the sale of cards will go to Mountbatten Hospice.

Lisa Traxler
Lisa Traxler is an elected member of the Royal Watercolour Society and Royal Society of Sculptors. Her award winning art combines painting and 3d form within her practice.

Lisa often collaborates with local company AJ Wells and Sons on her large vitreous enamelled steel sculptures and wall murals. The latest enamelled steel commission was for a Memory Tree at Mountbatten Hospice on the Island in 2019. Recent exhibitions have shown her work from Southampton City Art Gallery, to Bankside Gallery, London, and St Ives, Venice and Berlin.

Arts Council England funding has just been awarded for a duo exhibition in the West Gallery at Quay Arts, now postponed to 2021. A solo exhibition of new sculptures will be shown in the Foundry Gallery in Chelsea in Spring 2021.

“Working across a range of media including painting and sculpture my practice addresses an ongoing fascination with defence architecture and materiality.”

Lincoln Miles
Lincoln Miles‘ Architecture practice will be showing a selection of conceptual projects exploring themes for a changing world.

Where and when
The Summer Exhibition takes place on Saturday 29th, Sunday 30th and Monday 31st August 2020 – open daily between 11am – 4pm.

If you are unfamiliar with St Lawrence, from Ventnor continue on the A3055 past Ventnor Botanic Garden until you reach Old Park Road (on your left) and then follow the signs for Binnel Studios, you will pass The Bunker but need to park in the Binnel car park and walk back.

Entry is free, but don’t forget to visit the cash-point first, because you might just fall in love with what you see.

Our thanks to Binnel Studios and The Bunker Gallery for sponsoring this event feature. They and other businesses taking paid promotion enables you to continue reading OnTheWight for free