There will be changes to 30 of the 39 Isle of Wight council boundaries and one councillor will lose their ward as it is disbanded. Details within 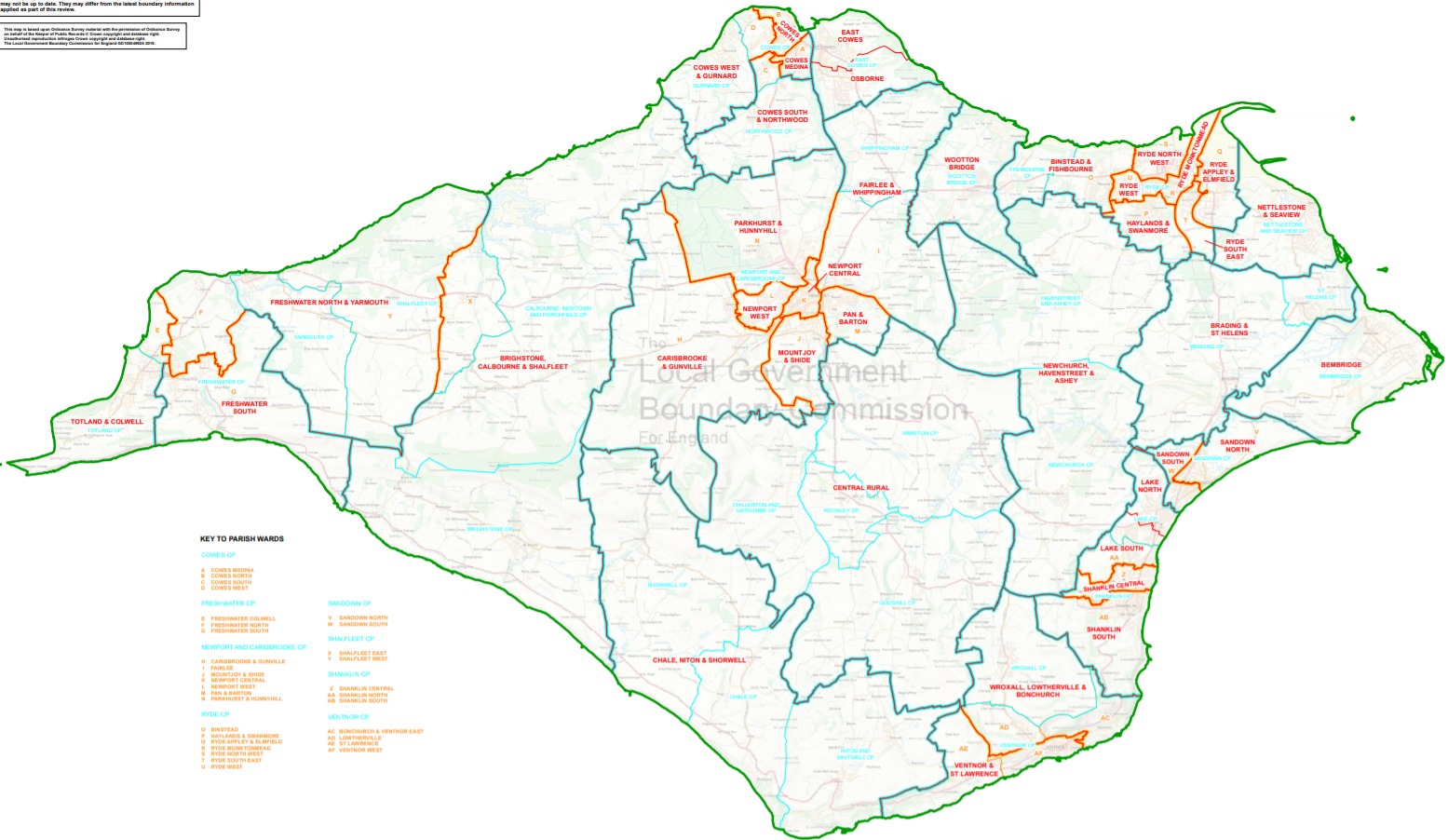 Boundaries of Isle of Wight Council wards are being thoroughly shaken up — meaning 30 wards will change and one councillor will be lost in a boundary review.

Following a revision of boundary lines from the Local Government Boundary Commission for England (LGBCE), the Isle of Wight council is conducting a review of the parliamentary constituency polling districts and polling places on the Island to accommodate the LGBCE changes, which will be enforced next May.

Interactive map
You can view the full remodel on an interactive map on the LGBCE Website where before and after boundary lines can be switched on and off, and also view the final proposals.

The proposals from the LGBCE — which includes splitting up wards and changing names — were approved in January, when The Isle of Wight (Electoral Changes) Order 2020 was made.

Changes were made to try to right the ‘electoral inequality’ some voters faced in the Isle of Wight Council’s ward, where some councillors represent more or fewer voters than others.

One ward disbanded
This means, with projected increases to the electorate by 2024, that 2,942 people should be in each of the 39 wards — and one councillor will lose their ward as it is disbanded.

In the report, investigators said:

“Our final recommendations will provide for good electoral equality while reflecting community identities and interests where we received such evidence during the consultation.”

Major changes have been made in Ryde with each councillor seeing their boundary lines shift slightly.

The Isle of Wight Council is examining the parliamentary polling districts, not the boundaries or the names of electoral wards, but is welcoming comments on the physical locations of the polling stations.

Comments can be made by residents on the review until 18th September. Send your representation in via post or email [email protected]

Ventnor will have a single councillor. Two councillors will be allowed for Lake, which is smaller by population and two for Shanklin, which is only marginally bigger. This will leave Ventnor under-represented.

I’m sure there’s a reason for that, I would like to be convinced it’s a good one.

Somebody must have it in for Councillor Perks?

Perks, and the friends who agreed that he needn’t bother paying his Winter Gardens £30,000 plus debt, evidently have it in for Ventnor…

Show a bit of respect! Aren’t you aware that he appears as LORD Perks on the official list of councillors although he obviously has better things to do, judging from his attendance record at meetings?

Vote Up5-1Vote Down
Steve Goodman
Perks is probably getting the right amount of respect due to someone doing what he does, and doesn’t, do… which, as we know, includes his poor record as a councillor, his unwillingness to pay his WG debt, and his willingness to pay for a pathetic ‘phony lordship’ title. It could of course be worse, in a world where we have once again just been reminded that political… Read more »
Vote Up6-1Vote Down
Justin Case

That would infer that he was actually in some way effective as a councillor.

What a waste of tax payers money. What must this futile exercise have cost? When the IWC has built the 15,000 new houses will it all have to be done again? Still, on a positive note, Mr. Stewart will have to answer to all those he is about to upset along the TT motorcycle route as his boundaries have extended to more properties along the route.

So they are happy to mess about with wards (which as far as I am aware nobody was upset with?) but not Counties when the Isle of Wight legally needs 2 MPs by their own definitions?? Oh how Tory…

The number one Cllr to go should be Dave Stewart

Vote Up180Vote Down
Benny C
Ian Ward has done the most damage consistently and is the most inept and expensive in terms of costs to islanders – chain ferry procurement, Island Roads contract administration, Etc. These have cost us all a great deal more than they would have if they’d been overseen by someone competent. That’s simple logic. He should be told to step down. How we go about seeking some sort… Read more »
Vote Up10-1Vote Down
Angela Hewitt

Whoe’s idea was it to change boundaries. Someone with nothing to do
at Westminster. There is always someone wanting to mess with things.

I think the correct expression is gerrymandering.

It’s to keep somebody in a job Angela