Does It Get Your Goat?

Many thanks to David Mears, South Wight Warden for sending through news about what’s been happening recently up on the downs.
The feral goats are now a familiar sight on Bonchurch Down and in the 14 years that they have been there they have made a …

Many thanks to David Mears, South Wight Warden for sending through news about what’s been happening recently up on the downs. 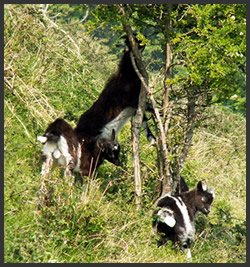 The feral goats are now a familiar sight on Bonchurch Down and in the 14 years that they have been there they have made a significant difference to the down improving the extent of the quality chalk grassland which has impressive displays of flowers and butterflies.

Holm oak trees were introduced to the Island from the Mediterranean in the 1700’s and have spread onto the down from gardens. They grow very well in our climate but unfortunately take over from the important chalk grassland with its range of specialist flowers and insects. The goats were introduced to help tackle this problem and they will happily eat and strip the bark off the more mature trees. The south facing slope of St Boniface Down features mature Holm Oak woodland which will be left untouched. It clearly shows what would happen to the adjacent down if scrub encroachment was not managed. 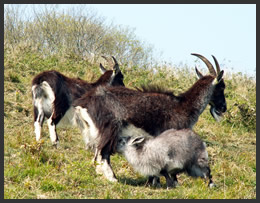 Up to now the north facing slope of St Boniface Down and the south facing slope of Littleton Down has had scrub encroachment removed mechanically or manually. This work is labour intensive and requires follow up work to ensure that the areas do not scrub up again. Following the success of grazing goats on Bonchurch Down the National Trust decided to enlarge the area of downland grazed by goats and applied for funding from the SITA Trust to replace the existing fence with goat fencing.

The bid was successful and the project has received £40,000 funding from SITA Trust, through the Landfill Tax Credit Scheme. Over the last winter work began. The first stage was preparing the new fence line and an excavator was used to do this. Once this work was completed the land needed time to settle before work began on putting up the new fencing. This fencing work was started just before Easter and will take several months to complete. 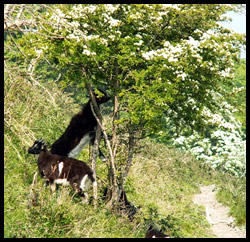 In addition to the clearance for the fencing additional scrub was cleared to provide uninterrupted flight paths for the butterflies so that the various isolated populations could expand into new areas.

David Mears, South Wight Warden said “Although I appreciate that when we clear an area with an excavator the ground is left very bare, the soil is full of seed and it is not long before the ground starts greening over again. This greening over though is only the first stage in the reversion to good quality lowland grassland. Now that we have done the bulk of the clearance work to enable us to install the new fence, we can leave the goats to manage the down and the change will be more gradual. The long term vision for the chalk downs at Ventnor is of a landscape with a mixture of open chalk turf, and scattered areas of trees which may have a rather Mediterranean feel to it. We will need to maintain the number of goats at the right level to ensure that there is still enough tree cover and food for them, but also making sure that the trees do not take over the grassland again.”

As with Bonchurch Down, cattle will graze the down with the goats so as to control the taller grasses.