Midnight on Wednesday 18th September is the last chance for supporters to sign up online for the first ever Hampshire and Isle of Wight Air Ambulance (HIOWAA) night-time 5km fun run; Dash in the Dark. 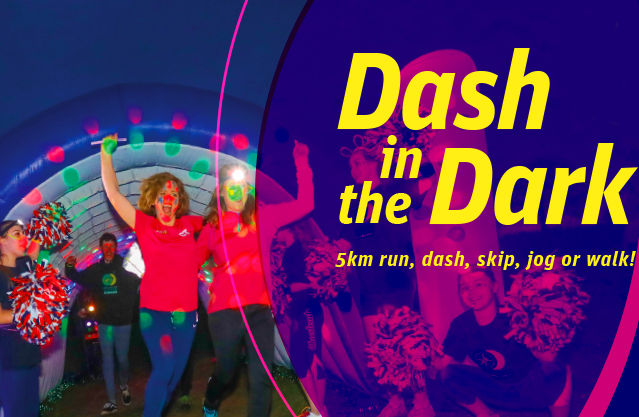 I hope you had an enjoyable and peaceful weekend. I am writing today as entries are still open for the Hampshire and Isle of Wight Air Ambulance night-time fun run; Dash in the Dark.

Midnight on Wednesday 18th September is the last chance for supporters to sign up online for the first ever Hampshire and Isle of Wight Air Ambulance (HIOWAA) night-time 5km fun run; Dash in the Dark. Entries will be accepted on the day at an additional cost.

Where and when
Over 600 participants will assemble on Southampton Common on Saturday 21st September, at 7.30pm, ready to run, skip, jump, walk or dance their way around the 5km route.

Dash in the Dark will feature wind, light, sound and cloud mission tunnels and participants are encouraged to light up the night by donning neon face paints, fancy dress and glow sticks.

Maisie’s story
14-year-old Maisie Godden-Hall and her family will be leading the pack, proudly sporting runner numbers 1, 2 and 3. Maisie was rescued by HIOWAA back in 2016 following a serious road traffic accident.

Since her accident, Maisie has gone on to champion and support the Charity through various fundraising activities, with Dash in the Dark being her latest fundraising adventure.

“We received the phone call that every parent hopes they will never receive. The police informed me that Maisie’s injuries were not life-threatening but life-changing, and those words still haunt me now.

“There are not enough words to thank all the people who helped that day; from the general public to the emergency services and in particular, the Air Ambulance.”

“Tickets for Dash in the Dark have been flying out of the door ever since we launched the run in March.

“Our supporters love getting involved in fun runs and we are already planning more mass participation events in the future.”

Don’t forget your head torch
The warm up on the night will start at 7:15pm, with the 5km Dash beginning at 7:30pm, as darkness falls.

Each participant will receive an official Dash in the Dark t-shirt and glow in the dark medal at the finish line.

The route is softly lit and paved throughout, and head torches are essential.

To register, or for more information, please visit the HIOWAA Website.

News shared by Andrew on behalf of Hampshire and Isle of Wight Air Ambulance. Ed