Holly has created a striking exhibition which not only looks beautiful set in stunning surroundings, but will leave you hopefully thinking differently about what gets washed up on beaches around the world and how it’s impacting sealife 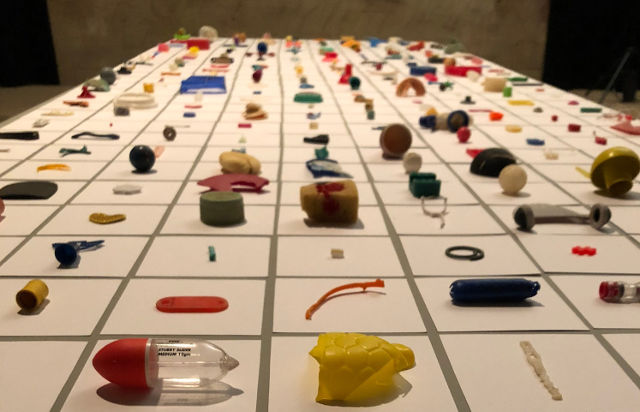 If you missed Isle of Wight artist, Holly Maslen’s exhibition Pick up Pieces at the Bunker last weekend, worry not, she’s going to be opening it again this coming Saturday (25th May – 10am-5pm) for a final day.

Pick up Pieces is a thought-provoking exhibition highlighting the environmental impact of single-use plastic. Within the striking exhibition you’ll see the thousands of pieces of plastic that Holly has picked up from beaches on the Isle of Wight.

What she’s created is both impactful and beautiful. We were struck by the choices Holly had made about how to display the work – with some items placed on a grid, others in straight lines on hanging glass shelves, some suspended from the ceiling of this former WWII concrete bunker and others washed up into the window which frames the view out to the rolling green coastline.

Considering the impact
Although the displays are beautifully-curated, they speak an important message – if our beaches are collecting this discarded plastic, imagine the impact it’s having on the seaflife in the oceans.

As well as charts showing how much plastic was collected and from where, Holly – who originally trained as a writer – shares touching and poignant poetry alongside the pieces.

Take the time to read them when you visit and it’s easy to imagine yourself standing alongside the artist on the beach in question.

Supporting the work
You can support the exhibition with £5, £10, £20, £30 or £50 sponsorships. The different levels offer a listing on Holly’s Website as sponsor, a typed poem of your choice, and items from the central display mounted on wood.

10 per cent of the sponsorship figure will go to Marine Conservation.

How much collected?
In her quest to rid the beaches of plastic Holly has collected a total of 5,396 pieces of plastic and rope from Isle of Wight beaches.

952 of those were from Yarverland beach (this highest number on the Island) but when Holly visited Ventnor, she was only able to find just two pieces, declaring Ventnor it the cleanest beach she’d come across.

OnTheWight was glad to be able to introduce Holly to Wendy Marshall aka Womble Wendy, who cleans Ventnor beach and esplanade every morning.

Where and when
The final day of the exhibition is Saturday 25th May between 10am and 5pm.

Find out more
Holly says her hopes are also to spark connections, future collaborations and discussions which will hopefully push the message contained within the exhibition further afield.

You can find out more about Holly Maslen by visiting her Website or following her on Facebook where you’ll find regular updates.