Every Councillor agrees to try to secure financial help through gaining ‘Assisted Area Status’ for the Island.

The motion to try and secure ‘Assisted Area Status’ for the Island was supported by every Councillor present at the latest full council meeting. 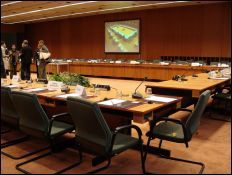 The proposal was put forward by Cllr Geoff Lumley and proposed by Cllr David Pugh, with both Cllr George Brown and Cllr Vanessa Churchman eager to second it.

The adoption by Cllr Pugh
By the time the motion was reached in the agenda, Cllr Lumley had left enraged.

Cllr Pugh said, “I would like to propose Cllr’s Lumley’s motion in his absence and ask Cllr Brown to second it.”

As it is unusual for the seconder to be named, Cllr Vanessa Churchman raised a point of order, “Normally you ask for a seconder.”

“Well I did ask for a seconder,” Cllr Pugh replied.

“No, you announced the seconder. I wished to second the motion,” said Cllr Churchman.

The matter was referred to the Monitoring Officer, Davina Fiore, who said, “I don’t think it matters whether a seconder is asked for or if a seconder is already in mind.

Finding a balance
Cllr Churchman explained that she raised the point because the motion was put forward by a Labour Councillor, proposed by a Conservative Councillor and, as an Independent Councillor, she would have liked to second the motion.

She said, “It would have given the impression that as a council we support this wholeheartedly.”

What was the motion?
Cllr Brown seconded the motion, he said: “Members may be surprised that I support what was originally Cllr Lumley’s motion.

“Should the Isle of Wight achieve ‘Assisted Area Status’, companies locating to or expanding on the Island could benefit from national or regional aid.”

An assisted area receives money from the government or EU to help create jobs and improve conditions.

The Council will do everything it can to secure the status
The meeting’s agenda read, “In the light of the continuing and longstanding economic problems of the Island, including 3,000 plus unemployed, of which 1,200 are young people, Council resolves to do everything that it can within the agreed budget and policy framework (and involving all interested parties) to secure ‘Assisted Area Status’, or similar, for the Isle of Wight.”

The reaction
Cllr Ian Stephens said: “This is very, very important to the Island.”

The motion was passed with 28 in favour, none against and none abstaining.

A representative from Ryde’s Trades Council told VB that they had arrived at the meeting and became worried about the motion once Cllr Lumley had left the meeting, they were, “amazed to observe that in his absence Councillor Leader and Tory, David Pugh, decided to move the motion himself and was supported by the entire Council!”

Image: ines saraiva under CC BY 2.0

newest oldest most voted
ThomasC
Dear God, now they can’t even propose and second motions. What possible hope do we have of securing Assisted Area status from the EU? Maybe if the Island wasn’t being represented by the Conservative party which is so heavily in favour of capitalism rather than this sort of state-sponsored subsidyism we might get taken more seriously, rather than probably laughed back from Brussels. It should be noted… Read more »
Vote Up00Vote Down
Cynic

Sounds like Cllr Brown was made “an offer he couldn’t refuse” by his capo! :-))

Vote Up00Vote Down
CAEF
This is great news. Don’t forget this is money we pay into the EU from the British contribution and its only our money we get back. There is no reason why we can’t secure it.All councillors are behind it and so the MP must do so too. It has to be said “well done to the Trades Council” for getting this under way.We must all make sure… Read more »
Vote Up00Vote Down
Mike Starke
“The matter was referred to the Monitoring Officer, Davina Fiore, who said, â€œI donâ€™t think it matters whether a seconder is asked for or if a seconder is already in mind. â€œI really donâ€™t think itâ€™s an important issue.â€” … These words give such an alarming insight into County Hall’s cavalier attitude to democracy that we should, no; must, take it very seriously. There are so many… Read more »
Vote Up00Vote Down
brick wall
I think the monitoring officer has got it just right. The important thing is that this has been passed, not who proposes and seconds it. Pugh did not name a seconder, he asked Brown to second it. Brown could have refused, and someone else could have seconded. Im quite sure theres some obscure rule somewhere that can be interpreted to mean what Mike Starke says, but frankly… Read more »
Vote Up00Vote Down
No.5
Only one organisation has been pursuing this since the LibDem failure many moons ago…and the only reason that Pug has jumped on the wagon along with his Tory cabal is that they see it as another escape route from the financial black hole they are responsible for…the same reason they cling to PFI when all around are leaving that sinking ship. Should we be granted assisted status,… Read more »
Vote Up00Vote Down
brick wall

who cares about the politics. If it happens, then great. Doesnt matter who is to blame for the past, or who is to be recognised for proposing a solution, what matters is that the solution works.

“We are aware the assisted area status map for 2014 to 2020 is in a consultation phase. That consultation finished on April 27.”

Above reply is about the consultation date.

Vote Up00Vote Down
RTUC
The IOWTUC were amazed because in January we wrote to The MP,The Chamber Of Commerce and Council Leader David Pugh about securing Assisted Area Status or similar for the Isle Of Wight.Council Leader David Pugh was the only one who did not reply.The IOWTUC have also been in contact with Minister of State for Business and Enterprise Mark Prisk about this matter.The motion put forward by Cllr… Read more »
Vote Up00Vote Down
peaceful_life

Is anyone actually aware of ‘things’ taking place with the Euro and the EU right now?

I seem to recall David Pugh claiming his Tory council would never ask the EU for help. He believed use of the begging bowl sent the wrong message. What changed David?

The hole in his pocket

Something odd is going on. Councillor’s have also united in not condemning the festival chaos.

Apart from Turner, who is representing outraged residents?

Vote Up00Vote Down
brick wall
Love it. the council actually agree on something that would be good for the island and everyone gets all confused and thinks something underhand is happening. Incidentally, there doesnt seem to be a deadline for application. Nothing is noted on the EU website about any sort of deadline. Why cant people for once take the council at face value and realise that the only thing between the… Read more »
Vote Up00Vote Down
No.5

and for RGF (Regional Growth Fund)

“Q: Will any leeway be given for late bids?

A: No. Applicants must ensure that their application forms and supporting documents are received before the deadline which for Round 3 is 12 noon on 13 June 2012. “

I take the council on its two faced value :)

Vote Up00Vote Down
playingthenumbers
Having agreed on it, where does this leave the head honcho at the IWC in the rehabilitation of local politics? Weâ€™ve had the shock & denial, everyone else has had the pain, some have been left angry, lots of the residents are depressed â€“ so are we finally looking at an upward turn, working towards reconstruction & finally acceptance that the situation is desperate? I fear not.… Read more »
Vote Up00Vote Down
playingthenumbers
For the record, the recent CEO Insight Survey 2012 (a survey of leading UK CEOs) produced the conclusion â€˜You canâ€™t cut your way to growth, Mr Osborneâ€™. One CEO said, â€œFour years ago, it was all about trimming budgets and curbing spending. But business leaders are now sending a clear message to the Government that UK Plc cannot cut its way to growth.â€ Asked to select their… Read more »
Vote Up00Vote Down
peaceful_life

The decisions highlighted in this article are exactly why the entire council should attend the Nicole Foss talk.

Vote Up00Vote Down
RTUC
It is a significant development that assisted area status is being applied for now by all political persuasions and is indeed welcome.The Trade Unions went into this with the notion that everyone should go forward without prejudice.The principle is that more should be put into the local economy than is taken out.The County Press on the 12th of January in an article entitled, “Can the Isle of… Read more »
Vote Up00Vote Down
RTUC

“But business leaders are now sending a clear message to the Government that UK Plc cannot cut its way to growth.â€

A strong whiff of hypocrisy accompanies that statement coming as it does from the sector of society that invented “downsizing” and continues to badger its friendly government to make it less expensive to get rid of employees so they can cut deeper.

Vote Up00Vote Down
playingthenumbers
Iâ€™d normally agree, but when faced with fewer customers with less money & increased competition, the realization that the recent ways werenâ€™t so clever after all may have started to creep in with some of these CEOs. Alternatively, like the little bit of good in Darth Vader reminds us, the CEOs have come around to thinking they were too proud of the technological terror they constructed &… Read more »
Vote Up00Vote Down
Cynic

“the CEOs have come around to thinking they were too proud of the technological terror they constructed & the ability to destroy is insignificant next to the needs of the human condition.”

The “human condition” comes a long way third to earning management bonuses and satisfying the demands of shareholders! :-))

Vote Up00Vote Down
playingthenumbers
When the man came knocking for the margin calls it was â€˜easyâ€™ for execs to justify the (average 42%) pay rise, whilst the shop floor took a freeze. Now Mrs Merkelâ€™s money tree is denuded of foliage, the munificence of banks limited to whatever hand out they blag & the universal derision that bosses get from â€˜occupyâ€™ to the parties of their own privileged interests (cognitive dissonance… Read more »
Vote Up00Vote Down
Robin Ford

’28 councillors voted for the motion, none abstained, none against.’ Where were the other 12? Could this confirm the fact that the council’s rule by cabal is so excluding that some members have given up the cost and simply use their election as a cash cow?