Watch this ‘wall of fog’ video taken this morning and you might understand how the Red Funnel ferry came into ‘light contact’ with a yacht moored in Cowes. RNLI say the ferry “ploughed through the moorings” of Daring Class boats. 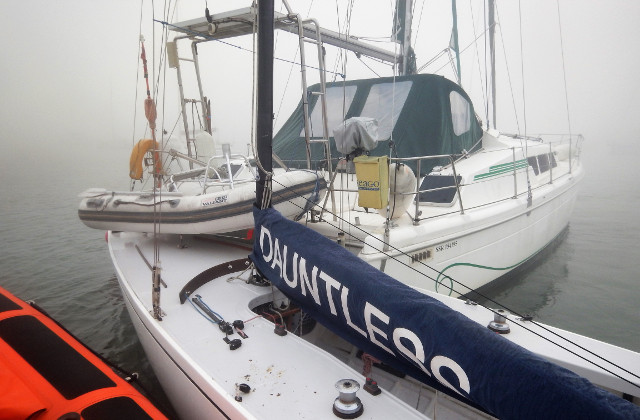 It was pretty foggy out there on and around the the Isle of Wight this morning. So thick in certain places that it was bound to affect travel.

Once such incident happened when the early Red Funnel boat out of Cowes came into contact with a small yacht that was moored in the fairway.

No crew on the yacht
A spokesperson for Red Funnel confirmed the details. They said,

“We can confirm that MV Red Eagle operating the 05.30 hrs sailing to Southampton came into light contact with a small yacht moored overnight in the fairway at Cowes (27 September 2018).

“There were no crew aboard the yacht and no one was injured on the ferry which was undamaged and remains in service.”

The incident resulted in the Cowes RNLI being called out.

Red Funnel have since announced cancellations due to the incident and cancelled the 10am from Southampton to East Cowes car ferry and the 11.30am East Cowes to Southampton ferry.

“An investigation into the cause is underway in partnership with the relevant authorities.

“Visibility at the time was reported to be extremely poor due to fog.”

“Cowes lifeboat spent two hours searching in thick fog this morning for yachts that had been torn from their moorings by an outgoing car ferry.

“The lifeboat launched at 7am when the fog in the harbour was down to less than 50 metres. It was apparent that the ship had ploughed through the moorings of a catamaran and several Daring Class yachts, sending several of the Darings adrift.

“Two were recovered just outside the harbour, one by a Cowes Harbour launch and the other by the lifeboat. The lifeboat also went on to find that a 30-foot catamaran had been pushed from its mooring on to another Daring, which ended up hard against the catamaran’s stern.

“Also left at an angle was the post indicating the small vessel channel.

“All the craft were towed into Shepards Marina.

“Cowes Harbour Commission confirmed that the 5.30 Red Funnel ferry Red Eagle was apparently responsible. The catamaran is owned by the Vicar of St Mary’s Church, the Rev Andrew Poppe, who has been informed of the mishap.

“Calshot lifeboat was also launched, to carry out a search of the Bramble Bank area, which proved to be fruitless.”

Red Funnel: “Inappropriate for us to comment further”
Red Funnel have now issued a further statement following inspection of the ferry.

A spokesperson for Red Funnel said,

“We have initiated a detailed investigation into a contact/close quarters situation involving Red Eagle in Cowes Harbour this morning (27 Sept. 18) which occurred in thick fog.

“There are no reported injuries and Red Eagle is currently alongside in Southampton whilst we undertake the preliminary stage of the investigation. All relevant authorities have been informed and it is therefore inappropriate for us to comment further at this time.

“The safety of its passengers, crew and other marine users is Red Funnel’s highest priority and this incident will be fully investigated.”

Wall of fog
An OnTheWight reader shared this great video from the top deck of the Wightlink Fastcat this morning.

It gives you a good idea of just how thick the fog was.