The group of volunteers who have been clearing and securing the former hospital in East Cowes for the past few years met again on Sunday. Steven Goodman reports back. 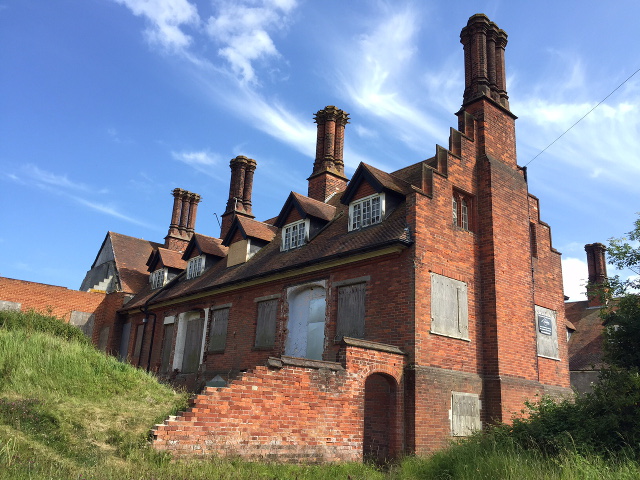 The bad news; Sunday’s small work party discovered another attempted entry/damage – some old metal bars had apparently been used to try to force an opening through a remaining wooden closure on the north side . The good news; no real harm done.

Summer gathering
It’s suggested that we have another ‘big’ gathering on the afternoon of Sunday 26th June (which will be about 113 years since the memorial hospital was opened) for anybody wishing to join us.

As the midsummer sun will shine, feel free to bring al fresco refreshment. (I’ll bring some disposable cups, a bottle opener, a bottle or two, and a bag or more for anything left behind).

Pillar news
We’re expecting news soon on the repair to the pillar damaged years ago by the waste contractor’s lorry, and we’re also hoping to hear soon that the owners will be able to start work on the building.

6 Comments on "Frank James Hospital: All welcome to summer gathering"

Vote Up20Vote Down
Steve Goodman
Grade II listed FJ is indeed a cherished part of the Island’s, and the nation’s, heritage, and it looks as it does today mainly because the previous council apparently chose to neglect it’s duty of care, and then turned down offers to save it when it still had positive financial value. Which partly accounts for the previous council being voted out. The architecturally and historically exceptional FJ… Read more »
Vote Up20Vote Down
Frankum Jamum

Indeed, far better to regenerate the old – which has quality – than to build modern crap.

Our Heritage is a treasure to be cherished.

Vote Up20Vote Down
Steve Goodman
Thanks again to everyone contributing to an enjoyable day, especially those who brought food and drink to share (although that, and not wishing to disturb so many butterflies, meant that not much work was done. More tidying soon; also expected is renewal of the faded inscription above the main door, thanks to a kind offer from one new concerned professional visitor yesterday. We are still waiting for… Read more »
Vote Up20Vote Down
the shadow

This might be part of the isle of wight heritage but lets face it ,it looks like a eye sore this building needs to be used for something or got rid off