Despite an IWC Cabinet member declaring yesterday that there’s no problem on the Isle of Wight, this is the kind of food parcel that’s being delivered to school children. Here’s one story behind it 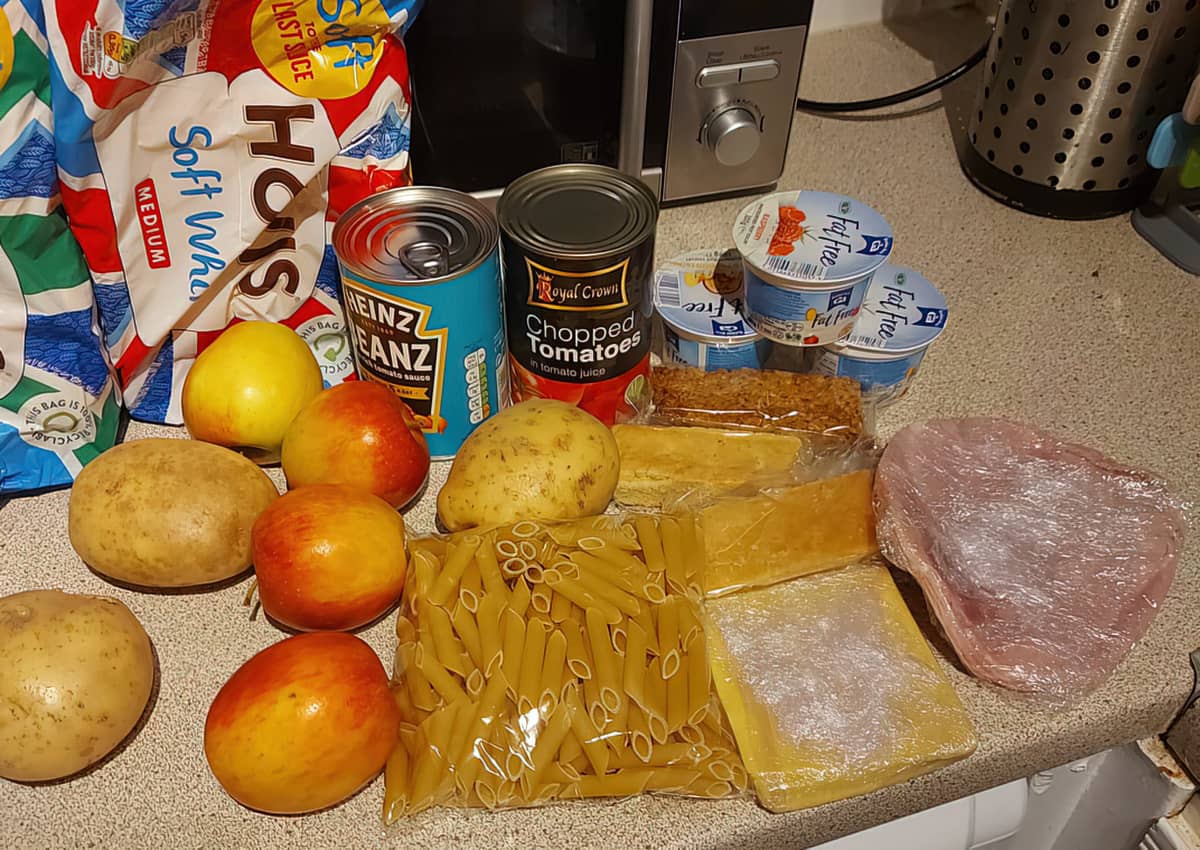 Yesterday the news broke nationally about concerns lunchtime food parcels that pupils eligible for free school meals were receiving during lockdown were insufficient.

During previous lockdowns, families received food vouchers, allowing the parents to choose how to feed their children. A change by the Conservative government meant that many parents would no longer receive these vouchers, but instead large catering companies got the contracts to supply boxes of food in their place.

Brading: No complaints
As played out on social media and on the national news, the concerns were that the food being supplied was not of a sufficient standard and didn’t match the same value as the vouchers that it was supposed to replace.

Here on the Island Cllr Paul Brading told the Scrutiny Committee last night (Tuesday) that they had received no complaints about the food parcels that were being provided. See more from the council below.

Island Mum speaks out
However, groups on Facebook heard a different story. News OnTheWight decided to speak to one mother about her experience after she posted a photo of the contents, explaining how it wouldn’t be enough to feed a hungry teenager.

Yesterday Lisa posted on Facebook about the food box that had been delivered to her.

Lisa’s view was that the food that had been delivered wasn’t even sufficient to provide a week’s work of lunches for her growing 15 year old son, never mind two weeks worth of food.

Adding that a number of the items arrived wrapped in cellophane, Lisa’s legitimate concern was that she had no idea what the Use By dates of the items were.

Less than a fiver’s food
News OnTheWight called her to discuss the situation today. Lisa said she’s totted up the value of what was delivered to her as £4.97.

When News OnTheWight asked the council how many days the boxes being delivered were supposed to cover, they said, “The current food parcel offer is a two week parcel and is equal to the value of the £28.50”.

Lisa: Where’s the rest of the money going?
She used to have vouchers and said she wasn’t made aware that things were changing, “The box just turned up.”

The council told us, if voucher’s were issued, they should be up £15 per eligible FSM pupil per week.

“With vouchers, I could have bought enough for ten days’ lunches, for £15 – just by choosing the right thing.

“If what’s delivered to me is worth under a fiver, where’s the rest of the money going?”

Supplier
Responding to questions, Isle of Wight council told News OnTheWight the company providing the food boxes is Caterlink, who are based on the Mainland.

(Update: We spoke with Caterlink today (14th Jan), who told us they do not supply the food for the school that Lisa’s son is at. We’re in the process of finding out which company does supply this.)

We asked IWC, “Does IWC carry out checks on the food parcels that are being delivered? Are they satisfied with the quality/quantity of food?”

“The Isle of Wight Council has been assured that the food parcels being offered by Caterlink are in line with the School Food Standards portion sizes.”

A spokesperson for Isle of Wight council told News OnTheWight,

“Funding has also been provided to supply vulnerable families with vouchers for the February half term too. The Connect4Communities programme has (and continues to) provide grant funding to organisations across the Island to support children and families in need. Information regarding these organisations and what they are offering can be found on the Website.

“In addition Connect4Communities has provided funding to the Citizens Advice Bureau (CAB) to support families who are experiencing financial hardship to support with fuel/water bills and can provide information and advice on the wider range of support currently available to families.

Government u-turn
Today (Wednesday) following campaigning footballer Marcus Rashford and food writer Jack Monroe, the government have performed a U-turn on the food parcels and will now be cutting out the middle-man allowing schools to decide whether they provide food parcels or vouchers (see the guidance).

This change in guidance would allow parents to choose what food they provide for their children for lunch during lockdown.

Other local support
Anybody needing further support should check the following Island organisations:

You can also check what benefits you’re entitled to, and apply for grants through the Turn 2 Us Website.

The solution is simple, make Paul Brading and Bob Seely live on it for a few weeks, let’s see how they both get on.

Such a shame that the IWC didnt check the contents of these food parcels. With around 7000 children living in poverty on the Island you would expect more care and diligence. Also the food doesn’t look that appealling: white bread, processed meat, sugary yoghurts 😟

Vote Up79-7Vote Down
gom2
“The current food parcel offer is a two week parcel and is equal to the value of the £28.50”. I wont shop where they do I can buy a trolley full of decent fresh food for less than that, someone is making a fortune out of depriving the entitled. perhaps councillor Brading would like to give Lisa and all the others £25 for the £28.50 worth of… Read more »
Vote Up59-4Vote Down
Carolyn

I would like to know where the rest of the cash has gone, and why the IWC did not have anyone quality checking this company.

That’s right rely of the charities again to bail you out.

Name and shame the company that provided that food parcel. It’s obviously not up to the value it should be

Reminds me of the black market spivs in WW2!

There’s no mention here or in any of the reports I have heard or read about providing food for those on special diets, either for medical or for religious, health and ethical reasons, such as vegetarian and vegan. Have these catering companies been supplying gluten- and dairy-free, for example? For these reasons, together with value for money, vouchers make far more sense.

Vote Up29-1Vote Down
Angela Hewitt
What these food parcels lack is love. What do the people making up these food parcels feed their children on! I don’t know if the above image is an exact replica of what is being delivered. All families have different ideas on how to feed their children – you only have to look at a supermarket trolly at the checkout to see that. The voucher maintains the… Read more »
Vote Up32-5Vote Down
snowwolf1
Less than £5 cost compared to a nearly £30 payment by government – not rocket science is it? Everyone seems to be doing a rip off due to Covid. Vouchers would be better but these need to be monitored also as all in life is not as fair as we would like to think. In a perfect world (which we are not in) then an ID check… Read more »
Vote Up28-2Vote Down
lauque

No, it’s not that difficult. Most of the fraud that goes on is the massive, multi-million-pound kind that gets a stamp of approval at the top. Ask anyone who works with low income households (social workers, foodbank, churches and teachers) and they will tell you that the number of people trying it on is very very small.

…So small that it would be a waste of money to set up systems to police it. Turn your beady eyes to all the big fraud that is getting blatantly worse.

Vote Up31-1Vote Down
I do not believe it

I always end-up severely gobsmacked when I read very concerning OTW reports (such as this one) by the sheer number of thumbs-down votes against any contributors to the discussion who have the gall to criticise the Tory establishment that, rather like a second class Mafia protection racket, rules the roost on this island.

Is there a squadron of wannabe Trumpites living here?

Vote Up31-5Vote Down
lauque
Truly, and not just on the island. ‘But can you imagine the mess that Corbyn/Labour would have made of it?’ (Arrrrrrrghhhhhhh!) In what respect? Earlier lockdown, fewer infections, a lower death toll? Better testing and tracing systems that didn’t waste hundreds of millions? All of which would have been BETTER for the economy! A total ban on evictions (see current concern about a loophole that will allow… Read more »
Vote Up29-4Vote Down
Mark L Francis

Can you imagine the amount of whining in the right-wing media? free broadband anyone?

It makes you wonder how these Government contracts are divvied up. Is it 1. did you go to school with Boris 2. Are you married to a tory MP 3. Are yoiu Matt Hancock’s neighbour? There are millions to be made here, guys.
apparently these parcels actually fulfil the specs the government gave them.

This is very sad!
Box of Army compo rations would be more exciting & keep your kids fitter!

The last bloke to make food go around,died 2021 years ago-this parcel would not last two weeks with any child,irrespective of age.
Apart from the picky eaters,of which there seems to be a lot nowadays,the contents are not that bad,where I was bought up,it would be regarded as a gourmet meal.

Your comment doesn’t make sense. Only Jesus could stretch one of those parcels to feed a child for two weeks, but the parcels are gourmet by some standards and the problem is picky eaters…?

I was being a bit sardonic,which perhaps you didn’t see,and if you’d lived in South Africa you’d also see the point about gourmet food.
On the whole the contents of the parcel aren’t bad but not for 2 weeks.
What did you want-a menu?

Sardonic, yes, but there were two contradictory points (only Jesus…but it’s not so bad) and I’m feeling cranky. I’d feel much crankier if I received one of those parcels myself. Vouchers are a much better option to let people choose what they want to cook with. Pax!